Migrant workers are on the move in record numbers, but exploitation remains rife and many will return home worse off than when they began

Main photo  Myanmar migrants Moung Kyaw, 40, and his wife Sane, 57, live in a small hut near the water in Ranong, Thailand. Heart disease has left him unable to work at a rubber plantation, so he helps his wife peel shrimp, now their sole source of income. (Photos courtesy of IOM)

On Jan 12, a fishing boat carrying more than 100 Indian migrants -- the precise number is not known -- left the Munambam harbour in Kerala. Its destination was New Zealand, more than 11,000 kilometres away.

It was the first known attempt by migrants to reach New Zealand by boat from India. If they took the shortest route, via the straits between Indonesia and Australia, they would face rough seas beset by frequent storms and typhoons.

The fate of the passengers -- around 50 residents from a refugee community in New Delhi and the rest from the southern state of Tamil Nadu -- is a mystery and the people who organised the journey remain unidentified.

"Missing somewhere at sea" is all MJ Sojan, the lead investigator in the case, can say, referring to the lost souls, who left behind 70 bags that were recovered by the police at the busy Indian port.

"They had to leave to find jobs, to eat," said Sugana Dhandapani, the mother of one intended migrant who ultimately decided not to board the boat with his wife and daughter. "They have been promised work in New Zealand," she told Reuters.

People have been setting off in boats from South and Southeast Asia to Australia and other destinations for decades. Most are fleeing conflicts in the likes of Iran and Afghanistan, but a boatload of Indians is a disturbing new development, say migration experts.

It also underlines the growing problem of unemployment in India, which rose to a 45-year high of 6.1% in the 2017-18 fiscal year. The government of Prime Minister Narendra Modi, which prides itself on job creation, was accused of suppressing the official figure, fearing backlash in an election year.

India's economy has been growing by about 7% annually but growth has been uneven, which means there are not enough new jobs. Young people make up a significant share of the unemployed, with 18.7% of urban males aged between 15 and 29 without work; for their female counterparts the figure is 27.2%.

As India struggles to create jobs for the one million young people who enter its workforce each month, there are fears that the country could one day become a producer of economic migrants on a scale matching that of the Philippines. 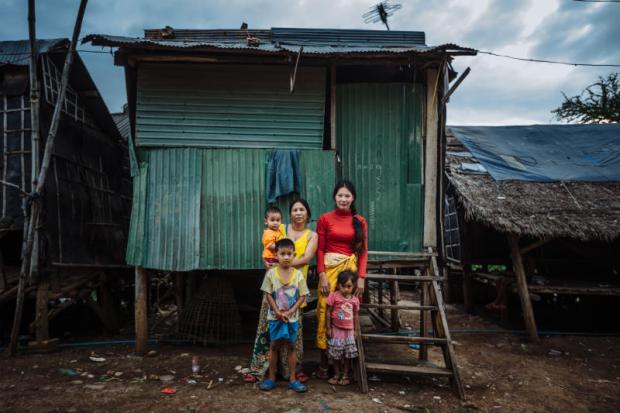 Runkun lives in a makeshift shelter built by her son in 2005 along an uncompleted railway in Poipet, Cambodia, with her daughter and grandchildren. They rely on remittances from her children working in Thailand. Photos courtesy of IOM/Benjamin Suomela

The Southeast Asian country has been among Asia's 10 fastest growing economies in recent years, but its unemployment rate is still the highest among developing countries in the region at 5.1%. The Asian Development Bank (ADB) estimated in 2013 that as many as 7 million Filipinos, about 17% of the workforce, had gone overseas in search of jobs at some point.

The Philippine Statistics Authority (PSA) says the unemployment rate is the lowest since 2013, but it still translates into 2.2 million people without work, compared with 41.3 million who are employed. The rates among younger people are staggering: 44.6% in the 15-24 age group and 30.3% among those aged 25 to 34.

Although the unemployment rate in the Philippines is at a record low, the World Bank points out that underemployment remains near its decade-long average of 18-20%. Moreover, many workers who have made the shift out of agriculture are now in low-end service jobs. So, while employment has increased between 2006 and 2015, average wages have remained stagnant.

That helps explain why so many Filipinos -- 2.3 million from April to September 2017 according to PAS -- continue to seek better opportunities abroad. Workers aged 30 to 34 comprised 21.7% of the total, followed by those aged 25 to 29 years at 20.4%. More than one-third of all overseas Filipino workers are employed in menial jobs. By destination, Saudi Arabia topped the table at 25.4%, followed by the United Arab Emirates (15.3%), Kuwait (6.7%) and Hong Kong (6.5%).

The number of workers from Thailand who travel abroad is low relative to some regional peers, but eyebrows were raised recently when it was reported that as many as 120,000 Thais were working illegally in South Korea. Taiwan is another popular destination.

"Embarrassing," wrote one Thai Facebook user, commenting on a Bangkok Post report about the increase in Thais travelling to South Korea as tourists who ended up overstaying as illegal labourers. 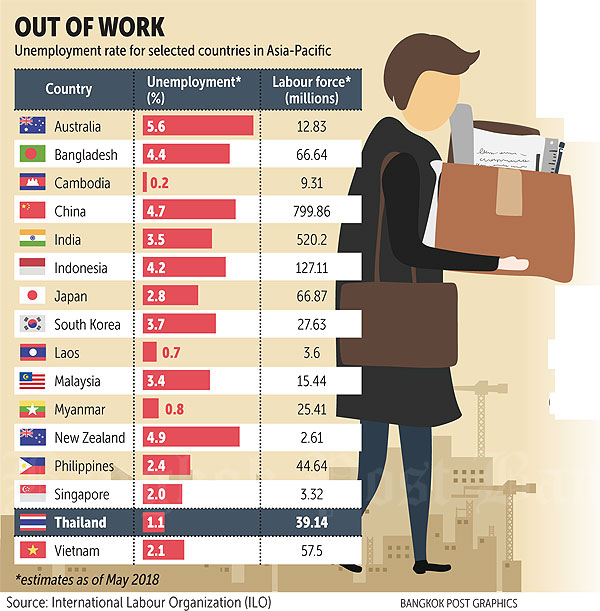 At the same time, Thailand in recent years has been the centre of unwanted international attention for mistreatment of migrant workers numbering in the millions.

That helped explain the great sigh of relief heard in official circles when the European Union recently lifted its "yellow card" against the Thai fishing industry, which had been the source of some of the most egregious abuses making headlines around the world.

But advocates for migrant workers say that the fight against illegal, unreported and unregulated fishing (IUU) still has a long way to go. As well, they say, abuses in sectors such as construction and agriculture merit closer investigation.

The International Organization for Migration (IOM), in its Thailand Migration Report 2019 released last month, acknowledged that the government had taken "important steps" to combat human trafficking and exploitative working conditions for migrants. This included reforms to laws and regulatory bodies to manage the fishery sector. But many migrants "continue to face hardship and remain vulnerable to abuse", the report said.

And while progressive policies guarantee migrants access to many essential services regardless of legal status, including education and healthcare, barriers still limit their use in practice, he said.

Only 51% of all eligible migrants are currently enrolled in the public health insurance system, while up to 200,000 migrant children remain out of school, the report notes.

According to the IOM, Thailand now hosts approximately 4.9 million non-Thai residents, a substantial increased from 3.7 million in 2014. The majority are from Cambodia, Laos, Myanmar and Vietnam (CLMV) with an estimated 3.9 million documented and undocumented workers. Other major groups include an estimated 480,000 stateless people, 110,000 skilled professionals and 100,000 refugees and asylum seekers.

Constituting over 10% of the total labour force, migrant workers in Thailand are thought to contribute between 4.3% and 6.6% of the country's US$455-billion GDP. For migrants and their family members, employment in Thailand supports a better living standards and poverty reduction in their home countries, where up to $2.8 billion in remittances are sent annually to the CLMV countries alone.

The figure could be as much as $10 billion if informal remittances are taken into consideration. But despite gaining financial benefits, many migrant workers in Thailand are still being abused by their employers.

The world has experienced a "dramatic rise" in migration in the past few decades, with some 247 million people estimated to be working outside their home countries in 2013, according a report by the Asian Development Bank. About 80 million, or 30% of all migrants, were from Asia Pacific, led by China (13.8 million), India (9.6 million) and Bangladesh (7.5 million).

Their main destinations include the United States and other high-income Organisation for Economic Co-operation and Development countries, as well as Middle Eastern countries such the United Arab Emirates, Saudi Arabia, Kuwait and Qatar. The region also has significant intraregional migration, such as from Bangladesh to India, Myanmar to Thailand, and Indonesia to Malaysia, the ADB said. 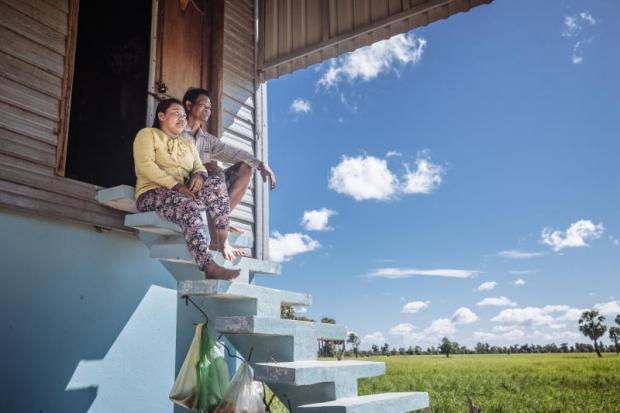 While migration can provide a better living standard for some, debt can prevent migrant workers in the region from realising the benefits of their mobility and cause them to return home worse off than they were before, a study by the IOM has found.

It said that one in six returned migrants in the Greater Mekong Subregion was struggling with debt upon return to their country of origin. Yet, indebtedness is an important factor in the decision-making process of migrants, so there is a risk that some will go abroad again.

Maryann Bylander, assistant professor of sociology at Lewis & Clark College, took a closer look at how debt compels and influences migration in a report titled "Debt and the Migration Experience: Insights from Southeast Asia".

The link is most pronounced in Cambodia, where more than 40% of rural remittance-receiving households report repayment of debt as the main use of the money they receive. Debt can also facilitate migration through wage reductions or loans taken out by migrants for their families. As well, debt has a way of shaping the overall migration experience.

"When migrants are in debt they can experience migration very differently, particularly when they owe money to their employers which can deepen the hierarchy and asymmetry between employers and employees," she told Asia Focus.

"In this situation, migrants are more likely to find themselves in a situation of exploitative work or immobility as a result of debt, while debt can also create tremendous pressure to send remittances and it might encourage risky choices." Such "risky choices" often include choosing to remain in jobs with poor working conditions.

The increasing cost of migration and recruitment in the region, often borne by employees, causes prospective migrants to borrow heavily in order to cover the cost of labour recruitment. Full repayment of these loans can take years. Wage deductions used by employers to cover recruitment costs can also inhibit workers from changing jobs or leaving, the report added.

In its most severe form, debt can create the risk of forced labour or human trafficking. It can also complicate the potential of migrants to return if they still owe money, which makes it harder for them to find their feet.

According to survey data collected by the IOM and the International Labour Organization in 2016 from 1,808 returned migrant workers in CLMV who took jobs in Thailand and Malaysia, around 9% came home still in debt, but the figure for Cambodia was 24%.

"We want to see the migration story end in something positive for those who go abroad, and for their families, but there is actually a mixed set of results here, where some people are coming back even more indebted from the cost of their migration or other kinds of costs," Ms Bylander added.

In addition to reduced financial status, indebted returnees also reported social and psychological struggles in the form of shame, embarrassment and discrimination in their communities, as well as harassment and violence from lenders. Such pressures subsequently provide strong incentives for them and their families to migrate again.

The study recommends the need to lower migration costs by ensuring that recruitment costs are borne by employers, as well as the need to encourage and simplify access to legal migration pathways that eliminate the need for brokers and middlemen.

Expanded monitoring of labour rights violations in countries of destination is also recommended. Recommendations for countries of origin include strengthening social protection programmes to eliminate the use of loans for basic needs, improving oversight and regulation around credit provision, and ensuring grievance outlets and hotlines for aspiring, current and returned migrants.