The baht should maintain its regional outperformance after the election if political divisions can be held in check. (Photo by Apichart Jinakul)

The baht is looking to repeat its performance as one of Asia’s best currencies last year. Monday’s growth data will shed light on a key pillar of its recent strength and may help it stay in pole position at least through the first quarter.

After being beaten by only the yen in 2018, the Thai currency has outshone all its regional peers so far in 2019, rising by 4% against the dollar. A robust domestic economy has helped it outperform both the won and Taiwanese dollar, which also have the benefit of a current-account surplus.

“The baht’s outperformance is attributable to the real strength of the nation’s fundamentals, including the current-account surplus,” said Hironori Sannami, an emerging-market currency trader at Mizuho Bank in Tokyo. “That also includes the fact that it is less susceptible to the US-China trade war relative to other surplus economies like South Korea and Taiwan.”

Thailand is also less vulnerable to a downturn in the technology sector unlike South Korea and Taiwan, increasing the attractiveness of the baht, the analyst added.

The tourism sector, by one measure worth about a fifth of the economy, is also recovering, noted Frances Cheung, head of Asia macro strategy at Westpac Banking Corp in Singapore.

Data due Monday is expected to show the economy grew 3.6% on an annual basis in the fourth quarter, its 12th consecutive quarter of above 3% growth. The Bank of Thailand said in its Feb 6 policy statement that the economy should continue gaining traction even though external demand might slow.

In fact, the health of the economy was one reason the Bank of Thailand has kept a hawkish tone, unlike many of its increasingly dovish global peers. Despite leaving rates unchanged at 1.75% at the latest meeting, two policy members of the Monetary Policy Committee voted for a 25 basis point increase, signaling a future rate hike remains a possibility, and further bolstering the relative attractiveness of the baht. 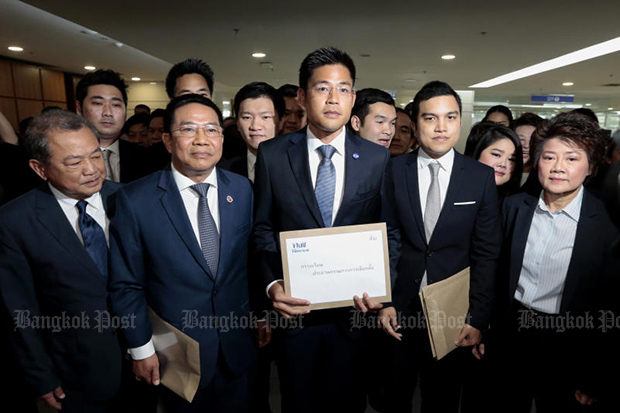 Thai Raksa Chart leaders nominated Princess Ubolratana to be the prime ministerial candidate but the party's choice was disapproved by the Election Commission. (Photo by Patipat Janthong)

The central bank is closely monitoring the baht and is ready to act on any excessive currency movements, governor Veerathai Santiprabhob told reporters on Thursday. December’s rate hike didn’t stoke baht strength, rather dollar weakness, the current account surplus and a recovery in tourist arrivals is behind the move, he said.

Of course, one wild card is the country’s upcoming national election in March, and investors are closely watching to see if political divisions erupt again. Allies of Thailand’s exiled former leader Thaksin Shinawatra are seeking to woo voters with a plan to revive economic growth after a failed bid by the Thai Raksa Chart Party to run Princess Ubolratana as a prime minister candidate in next month’s election.

Still, as United Overseas Bank pointed out in a client note on Tuesday, “both main contending parties practice pro-Keynesian, demand-focus policies, so any political gridlock is largely expected to centre around the size of stimulus and infrastructure investment.”

If political divisions can be held in check, the economy should continue to perform well no matter what party wins, and the baht should maintain its regional outperformance.