The Bank of Thailand expects 10 financial and non-financial institutions testing out facial recognition for electronic Know Your Customer (e-KYC) technology in the regulatory sandbox to exit this stage, paving the way for banks to offer passbook account opening through mobile banking apps in the next quarter. 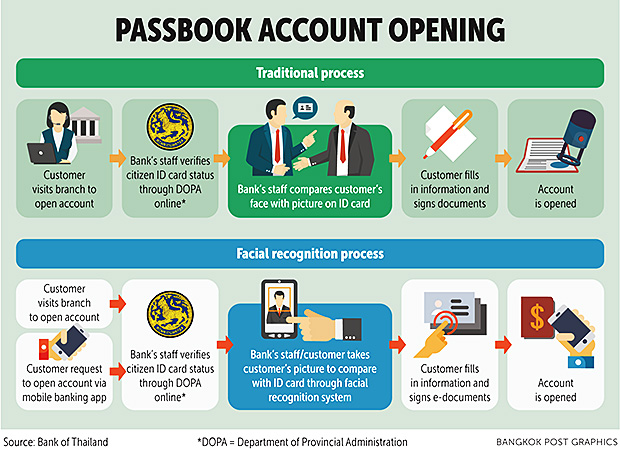 To exit the regulatory sandbox, the institutions must prove that their facial recognition technology has accuracy, availability and measures to prevent cyber-attacks and avoid fraud risk, in addition to data security, privacy rules and a process to keep e-signatures safe, said Siritida Panomwon Na Ayudhya, assistant governor of the central bank.

They must also prepare their employees to clarify and solve customer problems related to the technology, Ms Siritida said.

She said the central bank has chosen facial recognition technology for e-KYC because it can use reliable data such as citizen ID cards for comparison and offers convenience from smartphones that have facial recognition functions and high accuracy for authentication.

After the launch of passbook accounts opened through mobile banking apps, banks are expected to offer both physical and digital passbooks to customers initially, Ms Siritida said.

In the future, opening passbook accounts through the digital channel at a second bank might not require customers to fill out personal information again, as the second bank could acquire details from the first bank.

Apart from the 10 financial and non-financial institutions experiencing facial recognition in the central bank's regulatory sandbox, one company is testing out iris recognition for authentication to be used internally.

Many banks, including Siam Commercial Bank, Kasikornbank and Bank of Ayudhya, are known to be testing e-KYC technology in the central bank's sandbox.

Ms Siritida said 19 QR code payment projects have been tested in the sandbox, of which 11 using PromptPay and four using credit or debit cards for barcode payment have exited.

The remaining four credit or debit card projects are still in the experimental process.

The central bank has allowed those which are testing blockchain-based international money transfer services through their own networks to exit the regulatory sandbox to experiment in their own sandboxes, she said.

With blockchain-based letters of guarantee, the process will be shortened to less than one day from 3-7 days under traditional processes.

All institutions testing out innovations in the central bank's regulatory sandbox are expected to exit by year-end, Ms Siritida said.

For innovative products that do not require testing in the regulatory sandbox, the central bank allows financial institutions to test products in their own sandboxes.

Financial institutions adopting technology with a significant impact on operations, however, are required to submit annual plans to the central bank, provide progress updates on a quarterly basis and alert the central bank 15 days before the tech is launched.