The government has agreed to use the remaining cash from the Energy Conservation Fund to support a new recycling plan for discarded solar panels and vehicle batteries, in line with the goal of creating a circular economy.

The Industry, Energy and Transport ministries will host the project after officials met last Thursday.

"Thailand is encouraging people and companies to use renewable power and drive electric vehicles, but it has yet to plan for a retreatment and management programme for this kind of industrial waste," said Pasu Loharjun, permanent secretary of the Industry Ministry.

He said the three ministries agreed to cooperate to begin the plan soon.

"We are collecting related data to draw up the retreatment and management plan, while the 2-billion-baht fund will finance the project," he said.

Mr Pasu declined to go into detail about the budget for spending from the fund. 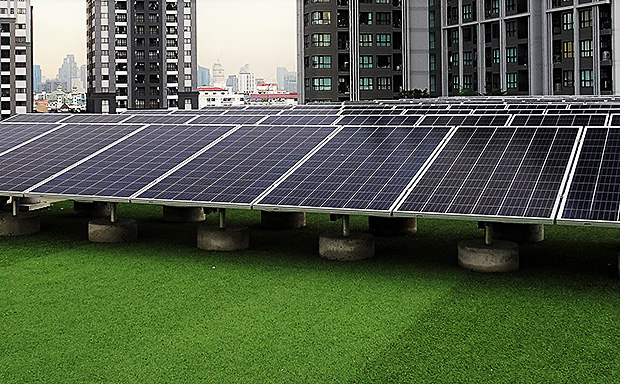 Solar panels line the roof of a commercial building in Bangkok. The government aims to launch a recycling plan for discarded solar panels and vehicle batteries.

With the promotion of such schemes, they predict many tonnes of waste from solar panels and vehicle batteries in the near future.

Moreover, Mr Pasu said the government will accelerate the fourth phase of the national petrochemical development plan after the third one started in 2004 and ended in 2018.

Map Ta Phut in Rayong has been developed as the premier petrochemical cluster for Thailand and a global petrochemical hub for the past several decades.

"The petrochemical cluster has been put on the list of targeted industries and located in the flagship Eastern Economic Corridor," Mr Pasu said. "There are many related petrochemical facilities in Rayong, such as the liquefied natural gas (LNG) receiving terminal with a capacity of 10 million tonnes a year."

In addition, the Industry Ministry has asked the Energy Ministry to coordinate data from its energy information technology centre as it aims to monitor the power consumption of manufacturing plants nationwide.

Academics, politicians from opposition parties and student leaders believe anti-government demonstrations will escalate in the wake of the delay in the charter rewrite vote.

Prime Minister Prayut Chan-o-cha has expressed Thailand's readiness to share knowledge and experiences in combatting Covid-19 at the General Debate of the 75th Session of the United Nations General Assembly (UNGA75).

The National Health Security Office (NHSO) has urged patients using the 30 baht universal healthcare services whose clinics have been closed down for corruption not to panic after thousands flocked to district offices last week to transfer to other hospitals.