More than a grain of truth
Business

More than a grain of truth

Thailand’s rice production has been low for years at an average of 300kg per rai. (Photo by Seksan Rojjanametakun)

The draft bill on rice reform is the latest political earthquake shaking up the country's rice industry, as it has stirred an uproar among farmers and academics who have cried foul that the bill is designed to benefit large-scale commercial producers.

It's long been said that farmers represent the backbone of Thailand, but the bill is poised to stir a huge commotion on a scale overriding years of farmers' blood, sweat and tears.

The bill passed the first reading of commissioners under the NLA late last month and it's expected to head to the NLA for second and third readings soon.

Among the controversies is Section 27 of the bill, which prohibits trade of rice seeds not approved under requirements set out by the bill. Violators are liable to a jail term of one year and/or a fine of up to 100,000 baht. 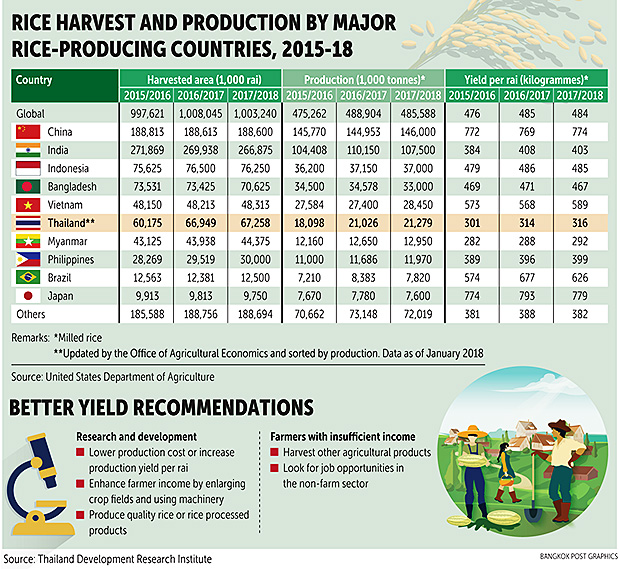 "The main concern about the draft is the all-encompassing power given to the Rice Department, which is currently tasked with only conducting R&D of rice varieties and yields," said Nipon Poapongsakorn, a distinguished fellow at the Thailand Development Research Institute (TDRI).

The department will be tasked with inspecting whether the paddy varieties farmers sell to the market or mills are registered with the department under the new act.

The draft also calls for the transfer of the rice production and marketing subcommittee, under the Commerce Ministry's rice administration committee, to the department.

The original objective of the rice bill was to reduce risks to farmers and draw a new generation to the farming sector, but the actual draft digresses from this objective by giving greater power to the Rice Department to control seeds and paddy in the local market, said Somporn Isvilanonda, a senior fellow at the Knowledge Network Institute of Thailand.

Section 20 of the draft bill, which requires paddy buyers to issue a receipt every time they make a purchase and submit a copy to the Rice Department online, and imposes penalties to the extent of imprisonment for violators, is tantamount to controlling the local rice market mechanism, Mr Somporn said. 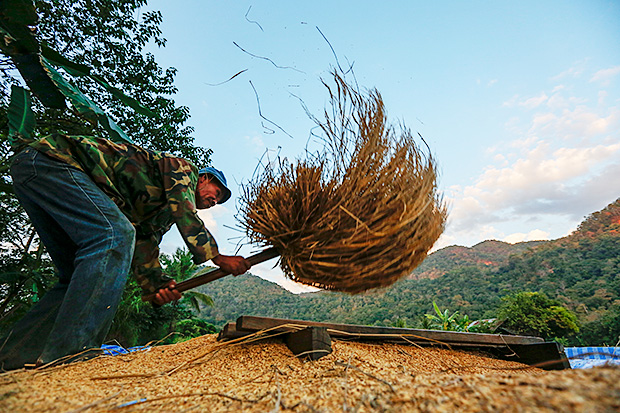 Such requirements will add costs to traders and millers and eventually affect farmers.

More importantly, the Commerce Ministry has the authority under the Rice Trading Act to demand that all rice traders report their rice trading situation, and the Agriculture Department has the Plant Variety Protection Act of 1999 to oversee the seed industry.

"In real practice, rice farmers will choose different rice seeds for the low and high lands," Mr Somporn said. "Once they harvest and sell their paddy to the rice mills, they normally sell in mixed grades and varieties. So in reality it's quite difficult for farmers to prevent the mixture of rice varieties."

In terms of rice variety development, some farmers are currently capable of doing R&D of rice varieties by themselves and sell them to one other.

The rice bill, which imposes rice seed sales on a commercial basis to register with the Rice Department, will turn over control of R&D of rice varieties to bureaucrats, Mr Somporn said.

As a matter of fact, the existing rice market mechanism through traders and middlemen already helps sort out or screen rice grades and quality, he said.

"The rice bill, which passed the first reading of commissioners under the NLA late last month, aims rather to control the supply chain of the country's upstream rice industry," Mr Somporn said. "If the bill's objective is to help poor farmers, the draft should focus on how to increase farmers' efficiency and reduce their production costs.

"Rice is food, not a narcotic plant, thus the draft should focus on promoting and upgrading all rice supply chains."

According to Mr Somporn, the removal of knowledgeable and impartial members of the national rice policy committee chaired by the prime minster is also improper, as those neutral members have played a key role in advising against inaccurate rice policy such as the all-grain rice-pledging scheme, which caused massive damage to the country.

The department says it has to assess the quality of the 500,000 tonnes of rice seeds stored by farmers.

Most farmers can send rice to rice mills for production. But farmers who fail to receive permits from the Rice Department because of defects in the quality of their seeds are prohibited from doing so, as with farmers who produce rice that is not certified as a Thai rice variety. 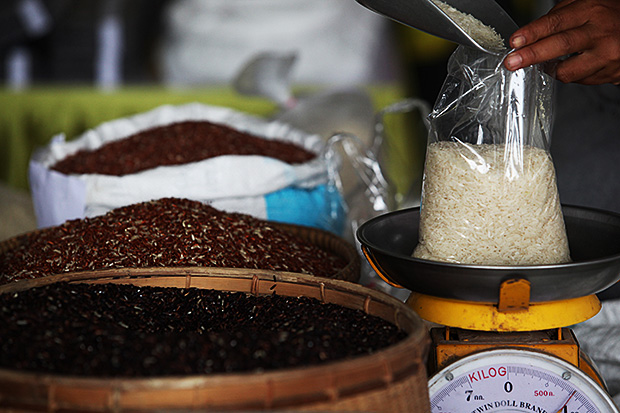 Prices of milled rice sometimes drop significantly, forcing farmers to bypass middlemen and sell the grain themselves in Bangkok. (Photo by Wichan Charoenkiatpakul)

Panit Teerapawongse, deputy secretary of commissioners under the NLA, said the modifications were proposed by private agencies and would suspend regulations that prohibit the sale of non-certified or non-standard rice seeds, except in cases where state agencies find that rice seeds are defective and may cause damage to rice production.

He said the draft rice bill is set to be proposed to the NLA president next week and is expected to be included in the agenda of a parliamentary meeting at the end of February.

Suthep Kongmak, president of the Farmers' Association, said it seems improper to step up efforts to issue the rice bill during this period because it provides no benefits to farmers. The drafting process should involve more knowledgeable and capable persons to help draft the bill, he said.

"We're waiting for details of the draft," Mr Suthep said. "But in principle, the bill should be written well with good intentions from the outset, and once it has been widely criticised and is against people's consent, it should not be moved ahead and eventually become subject to delay."

Although the bill is not directly related to rice exporters, the bill should be issued in a way that benefits the rice industry as a whole, said Charoen Laothammatas, president of the Thai Rice Exporters Association.

It's time for Thailand to have a rice master plan to develop the rice industry and R&D on seeds in response to market demand, Mr Charoen said. R&D on rice seeds in Thailand has moved at a snail's pace compared with other rice producers such as Vietnam.

"We need to understand that 50% of total rice production is slated for export," he said. "If we can export more rice, the domestic rice price will improve accordingly."

R is for research

Thailand, however, invests less than 0.5% of GDP, and only about one-fifth of that is allocated to agriculture proper. 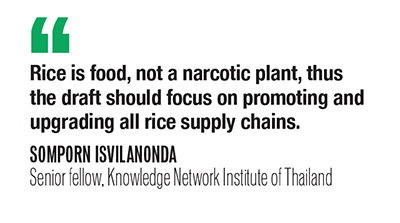 "There is a pressing need for more investment in agricultural R&D, as well as development of agricultural research personnel in order for Thailand to realise its 4.0 plan," said Wisarn Pupphavesa, a senior adviser on international economics and development policy at the TDRI.

Current agricultural policy interventions are mostly commodity-oriented, rather than aimed at the root causes of the problems, Mr Wisarn said.

The government should allocate a much larger annual research budget to the National Research Management System and a much greater portion of the budget should be dedicated to agricultural research projects, he said.

Vaccinating Asean for a lower-carbon future