A low-rise project offers discounts at a housing fair. Developments of this type could benefit as condo interest wanes. (Photo by Phrakrit Juntawong)

Vichai Viratkapan, acting director-general of the Real Estate Information Center (REIC), said every government measure related to the property sector has an impact on property sales or transfers, as shown by statistics.

"The fourth quarter last year saw a surge in the number of residential transfers after the Bank of Thailand announced in early November 2018 to apply the new LTV limits on April 1, 2019," he said.

According to the REIC, the fourth-quarter figure for residential transfers was the highest in the past 12 quarters, dating back to the fourth quarter of 2015 -- the starting period of property tax incentives.

Many developers at that time enjoyed new sales of ready-to-transfer houses and condos spurred by the incentives, which were effective for six months from Oct 29, 2015 to April 28, 2016 as buyers sought to save money on transfer and mortgage fees.

Now, before the new LTV limits hit, developers don't want to miss the bandwagon and they're using heavy promotions to attract condo buyers to ready-to-transfer units at projects where construction is complete. 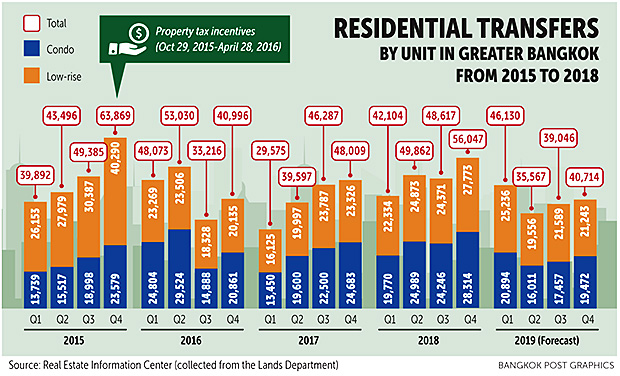 Campaigns include discounts of up to 30% or up to 12 million baht, a zero-percent mortgage for up to three years, a waiver of monthly payments for home loans or a waiver of transfer fees and other expenses like common area fees.

Most campaigns run until March 29, the last working day of the Lands Department (where property transfers are processed) before the new lending curbs take effect on April 1.

"It's the best time for real demand and investment buyers to buy [a ready-to-move condo]," said Phattarachai Taweewong, senior manager in the research department at property consultant Colliers International Thailand.

Buyers will get a unit at a good price, he said. For investment buyers, it's a good investment because the discount is up to 30%. They may rent out and hold the unit for three to five years, waiting for a capital gain before reselling it to make a profit.

Before making a decision, buyers should get a unit price list at projects they are interested in, then submit for a mortgage application at any bank to get a pre-approval on a mortgage loan, Mr Phattarachai said. 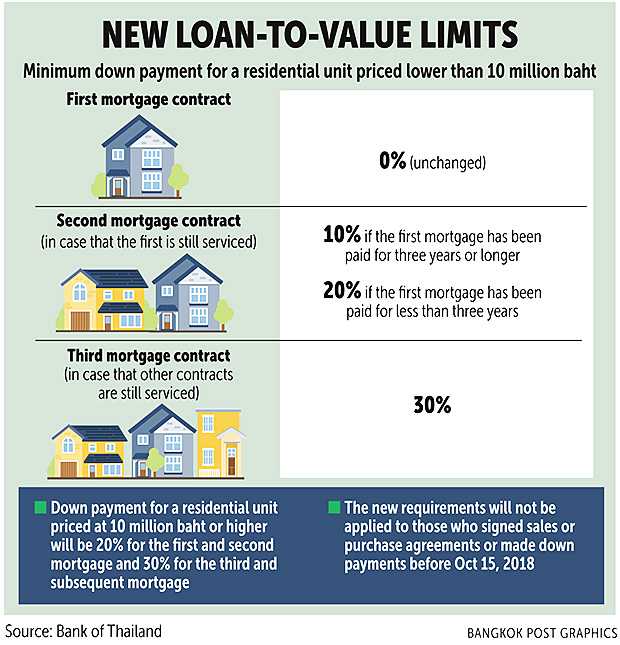 "When buyers have a mortgage loan pre-approval from the bank, their bargaining power with developers will be higher and they can ask for additional discounts or promotions," he said. "Mortgage approval usually takes no longer than 15 days. Buyers should submit the application within the first week of March."

As some buyers may be concerned that there will be defects at the unit they buy (and which developers may refuse to fix if buyers get a unit transfer), Mr Phattarachai suggested buyers ask for a document of inspection and acceptance from developers.

"The document should notify that the developer will fix any defects found until the buyer is happy," he said. "Buyers can bargain over the deal. It's really a buyer's market now."

"Buyers are now tantalised with heavy campaigns," he said. "Don't be tempted by discounts. Don't follow the trend or follow anybody. Buy a unit priced no higher than your purchasing power. Buy the one that you can immediately utilise, like a unit near your workplace or where rent is attractive."

Aliwassa Pathnadabutr, managing director of property consultant CBRE Thailand, said that while market sentiment is on the buyer's side, not every project will offer a clearance discount.

She said the market today is a combination of best-selling projects, which keep 10-20% of good units to sell on completion, and low-performing projects with unsold units.

"Buyers should also consider other factors apart from pricing," Ms Aliwassa said. "If they will buy for their own use, they still need to consider location, unit size, functions and common area facilities which match their specific needs as top priorities."

They should go to actual project sites and inspect as many projects as possible to compare, she said. If the projects are already completed, they should see inside the units. They should be aware of common area fees and other expenses.

After inspection, they will be able to come up with their top three options for what they would like to buy. They can then start negotiating prices and choose the one that is well balanced for the price they will pay and the project they like.

Bargain prices mostly will be for inferior units that have been left for sale. Inferior units such as those with a blocked view will have higher discounts. Therefore, buyers of good units normally will not get the same discount.

Investors have more flexibility because they generally don't intend to live in the unit. Their purpose is to get the best price and high rental yields. Usually developers tend to sell units in bulk if they have to offer clearance prices.

The discount could be in the form of cash or other benefits. For instance, the developer absorbs the cost of the furniture package or the common area fee for a certain period of time on behalf of the buyer.

If buyers purchase more than one unit they will likely get better deals, especially if they have ready funds and are able to transfer the units immediately, Ms Aliwassa said.

Mr Phattarachai of Colliers said developers are in a hurry to drain their unsold condo inventory within the first quarter because they are concerned that the new lending curbs will make condo sales even harder.

"If developers cannot drain this stock as much as possible before the new LTV limits take effect, it will become dead stock for longer, as buyers cannot seek a large amount of money to pay for a higher down payment as required by the Bank of Thailand," he said.

Large developers that carry a large amount of unsold condo inventory include SET-listed Ananda Development Plc, which earlier this month reported more than 13.7 billion baht worth of ready-to-move condo inventory, up from 12.4 billion baht at the end of September 2018.

Personal data of 106 million international travellers to Thailand was found to have been exposed online in August before it was quickly secured by Thai authorities, according to Comparitech, a cybersecurity research firm.