Farmers' representatives in Phichit province march to the provincial hall on Feb 18 to oppose the Rice Bill, which they say would be damaging to farmers' interests, and submit a petition to the provincial governor. Opponents threatened to mobilise protests across the country if the controversial bill was not withdrawn from the National Legislative Assembly. (File photo)

The National Legislative Assembly president on Tuesday ordered the withdrawal of the controversial rice bill from the NLA’s business agenda.

Kittisak Rattanawaraha, a member of a NLA committee vetting the legislation, said on Tuesday that consideration of the legislation was adjourned indefinitely. It would not be tabled again in the NLA.

If the next administration views it as important, then it could decide whether to again table the bill, said Mr Kittisak, who proposed the original legislation.

The scrutiny committee earlier expressed confidence that the revised version would satisfy all interested parties during scheduled consideration of the second and third readings of the bill on Tuesday.

Mr Kittisak said his panel had jointly discussed the opposition to the bill and found there was  misunderstanding about it. The panel did not want to see a rift or any confrontation between supporters and opponents of the bill. Certain political parties had bought into the issue for political gain, he said, but  would not name them.

“We also love the country. There is a misunderstanding. There are both supporters and opponents to the bill. We are afraid that the rift will increase, so we decided to postpone the bill indefinitely.

"The legislation had the good intention of helping farmers. But the chance of the bill being enacted is slight ... it will be up to the next government whether to retable it for consideration, or not,’’ said Mr Kittisak.

He said that in deciding to withdraw the bill his panel was not acting on the orders of the prime minister or anyone else. The panel was not concerned whether a certain political party would lose votes or not. The draft legislation was revised for the farmers, with their opinions taken into account.

Opponents had threatened to mobilise protests by farmers across the country if the bill was not withdrawn.

Sources said the rice bill was initially the first item on the NLA’s meeting agenda on Tuesday. However, NLA president Pompetch Wichitcholchai had moved up the anti- dumping and countervailing bill, which was the second item, for consideration when the meeting opened.

Answering reporters' questions, Gen Marut Patchatasing, chairman of the committee vetting the rice bill, said the NLA president had ordered the withdrawal of the legislation because the content was still unclear.

Last Wednesday, critics of the rice bill submitted an open letter to NLA president Pornpetch  asking the assembly to suspend its scrutiny of the bill.

Thasanee Weerakan, a key member of Alternative Agriculture Network, said there was concern about Section 6 of the bill, which deals with the rice board. The proposed structure of the board was imbalanced. Under the proposed structure, there were only four farmers' representatives, compared with 14 people representing state agencies. This would put rice farmers at a disadvantage during a vote.

Other issues needing to be reviewed included Section 21, which calls for the zoning of rice farming, and Section 27/2, which seemed to promote only rice varieties endorsed by the Rice Department.

Prime Minister Prayut Chan-o-cha said later he had received a report from the NLA that the rice  bill had been put on hold because it was still not understood by farmers. 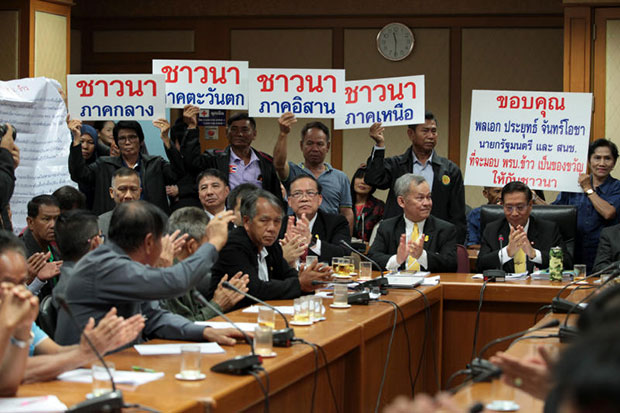 Some farmers’ representatives expressed their support for the bill when invited to exchange views with the National Legislative Assembly committee handling the legislation on Feb 17. (File photo)