Singapore leads the overall table with high scores for employment and quality of life.

In an increasingly globalised society, young people are more likely to have the opportunity to choose the city in which they live. To help those that might be interested in moving abroad, the financial education website ValueChampion Singapore decided to lay out some of the best options in Asia Pacific based on economic and social factors. 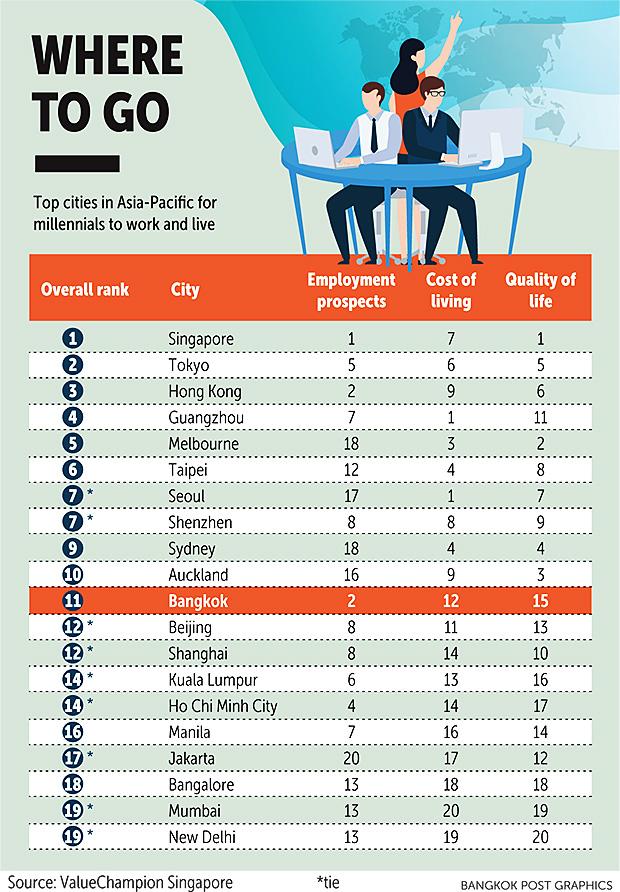 Many young people are willing to move abroad in order to pursue personal and career opportunities. In fact, the World Economic Forum found that four out of five millennials would be willing to relocate internationally for work. This made us wonder which cities in Asia might be great fits for millennials.

To obtain some answers, ValueChampion conducted a wide ranging data analysis for 20 of the region's most notable cities (see table) in order to help narrow down the best options for young people. Among the study highlights:

1. Singapore: Singapore's thriving economy provides strong job opportunities for young people. For example, the city-state had the highest GDP per capita (S$79,000) and the second lowest unemployment rates (2.2% total, 3.96% for youth) of the 20 cities we studied. Furthermore, Singapore had the lowest gender wage gap. Additionally, Singapore's low levels of pollution (4th) and high safety ratings (2nd) make it a great place for anyone to call home.

2. Tokyo: Japan's capital has a great balance between a strong economy, reasonable cost of living and pleasant living environment. The country's unemployment rate is just 2.5% and GDP per capita is among the highest of the locations in our study at about S$53,000. Additionally, we estimate that residents spend less of their income on rent compared with those of other cities, at about 27%. Finally, Tokyo ranked extremely well in terms of low pollution and safety, putting it in the top 5 for overall quality of living.

3. Hong Kong: Hong Kong stands out for low unemployment (2.8% total, 8.12% for youth) and high GDP per capita (S$63,000). Health indicators are good, with very high life expectancy (84.2 years) and a low child mortality rate (0.27%). On the other hand, the city is still quite expensive: residents spend about 31% of their income on rent, which is a high financial burden for young people.

4. Guangzhou: Guangzhou was one of the most affordable cities in our review. For example, the average cost of a pint of beer is just S$1.22, and we estimate the average resident spends only 22% of their income on rent. Unfortunately, pollution is relatively high compared to other cities in the study.

5. Melbourne: Australia's second largest city has very low levels of pollution and was ranked highly by the Global Peace Index, both of which suggest it would be a great environment to live in. Additionally, it's affordable, with residents spending about 20% of their income on rent, on average. The downside of Melbourne is that unemployment rates in Australia are higher (5% overall, 12.49% for youth) than in other countries.

Our analysis incorporated a wide variety of data grouped into three broad categories groups: employment prospects, cost of living and quality of life.

Employment prospects: Finding a job is an essential aspect of moving to another country for work. Rankings for this category were based on youth (15-24) and total unemployment rates, GDP growth, GDP per capita and wage equality between genders.

Cost of living: Given the burden of student loans and other financial pressures, millennials are often price-conscious. However, assessing the cost of living between cities can be difficult. We simplified this process quite a bit by focusing on housing and entertainment. To determine the cost of housing, we divided the average monthly rent in each city by the country's GDP per capita.

Quality of life: We chose to score cities based on their ranks for safety, health and pollution. To make this possible, we examined statistics including life expectancy, child mortality, a pollution index produced by Numbeo based on air pollution data produced by the World Health Organisation as well as the Global Peace Index.

There are many caveats to be aware of in our analysis. First and foremost, due to varying preferences, the findings are not applicable to all millennials; for example, language barrier can be a significant deterrent for some young adults considering a move.

William Hofmann is a senior research analyst at ValueChampion Singapore, focusing on banking and SMEs. He previously was an economic consultant at Industrial Economics Inc.