There were 213 participating merchants and well-equipped refund locations, but the attempt to stimulate cashless spending via VAT refunds was a total flop. (File photo)

Of the total, 90% was spent via debit card and the remaining 10% through QR code payment, said Lavaron Sangsnit, director-general of the Fiscal Policy Office (FPO).

Debit cards and QR codes are not how most people purchase products, with the majority using credit cards because of higher incentives such as discounts, point rewards and the ability to repay in instalments, he said. 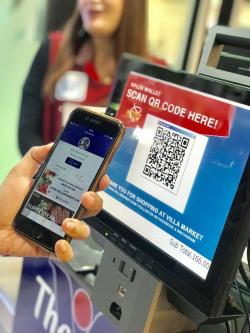 A customer pays for goods via QR payment at a supermarket in Bangkok.

Spending value is only one measure of the success of the VAT refund scheme, as it is also aimed at attracting merchants to install payment systems that can separate VAT from product and service prices, sending such information to the Revenue Department, Mr Lavaron said.

Boosting domestic consumption was not the scheme's aim, he said.

Under the terms approved by the cabinet in December, refund claimants are required to pay via debit card or QR code and must register for the scheme.

Qualified shoppers who spent during Feb 1-15 were eligible for a 5% VAT refund for every purchase of products and services that included VAT. The remaining 2% of VAT went to the government's coffers.

Mr Lavaron blamed the lukewarm response on worries about information privacy and financial data disclosure, which could lead to tax payment probes.

Waiting for the VAT refund until November was another disincentive, as many credit cards offer immediate discounts when the cards are swiped, he said.

The FPO sought Finance Minister Apisak Tantivorawong's approval to offer a VAT refund scheme during the Songkran holiday, Mr Lavaron said, but Mr Apisak refused for fear that the scheme would be seen as a political ploy ahead of the general election.