Palm oil producers in Indonesia are undeterred by the growing consumer backlash closer to home in Asia against the commodity, which has long had a negative image in Europe where it is seen as a major cause of environmental destruction and deforestation.

Industry executives are maintaining an upbeat outlook after palm oil exports from the country in 2018 increased by 8% to 34.7 million tonnes, said Mukti Sardjono, the executive director of the Indonesian Palm Oil Association (Gapki). 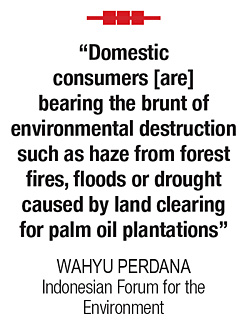 "We will expand our positive campaign about palm oil at home and in major export destination countries." Sardjono told Asia Focus. "We will also push to increase our exports and address various concerns that cause barriers to the global trade."

A recent report by Nikkei Asian Review said that Aeon, a major Japan supermarket chain, had decided to source only palm oil produced in a sustainable manner for its private label starting this month.

According to the report, Japanese corporations are becoming more sensitive about public scrutiny of their environmental records and other aspects of their business as the country will be in the global spotlight when Tokyo hosts the 2020 Olympics.

Activists advocating for various causes have used previous Olympiads as a global stage to draw attention to any practices perceived as unethical, such as human rights violations, sweatshop labour or environmental destruction in the supply chains of companies associated with the Olympics. Such campaigns can be a public relations nightmare for corporations expecting to boost their image by supporting or being involved in the Games.

Gapki secretary-general Togar Sitanggang is adamant that palm oil production from Indonesia, which combined with Malaysia accounts for 90% of global production, will not be affected by any increased backlash.

"There were about 11 million tonnes of certified palm oil produced in 2017 and 2018, but only 6 million tonnes were procured. So, there is still an abundant supply of certified palm oil out there that remain unabsorbed in the market," he told Asia Focus, adding that it would not be so difficult for corporations and consumers with environmental concerns to find sustainable palm oil products.

Indonesia was the first country to make palm oil production certification an obligation in 2011 with its Indonesian Sustainable Palm Oil (ISPO) certification regime. There are now 628 plantations and growers that have been ISPO-certified, according to data from Gapki.

According to data from the Roundtable on Sustainable Palm Oil (RSPO), there were 1.95 million hectares of certified oil palm plantations and almost 7.4 million tonnes of certified sustainable palm oil produced in Indonesia as of January 2018. The RSPO is an international certification regime established in 2004 to promote sustainable palm oil and improve the image of the product. Its members include major palm oil industry players, consumer groups and the World Wildlife Fund (WWF).

But the Indonesian Forum for the Environment (Walhi) says that both domestic consumers and their peers elsewhere in Asia are continuing to turn away from palm oil as a result of increased awareness about buying and consuming environmentally friendly products.

Wahyu Perdana, a Walhi campaigner, told Asia Focus that consumers these days read labels more carefully to find out how goods are produced and what their ingredients are.

"They would avoid using products that destroy the environment," he said. "As for domestic consumers, they are the ones bearing the brunt of environmental destruction such as haze from forest fires, floods or drought caused by land clearing for palm oil plantations.

Despite the fact that the sustainability of palm oil has been a major concern for some time, it barely got a mention during the second debate for the April 17 presidential elections between incumbent Joko Widodo and his challenger Prabowo Subianto.

The Feb 17 debate, the second of five scheduled between the two contenders, focused on energy, food security, infrastructure, natural resources and environment.

Both Joko and Prabowo touched on palm oil issue but neither mentioned the industry's adverse environmental impact. Instead, they talked more about increasing palm oil production as a major source of renewable energy in a bid to reduce dependence on fossil fuels and imported energy.

"We hope 30% of total palm production will go to biofuel. The plan is clear, so we will not rely on imported oil," President Widodo said.

The Widodo government has previously said it would offer incentives for developers of B100 pure biodiesel derived from palm oil, which it hopes could replace fuel imports within three years.

The state energy company PT Pertamina has signed an agreement with the Italian oil company Eni to develop a refinery in Indonesia that would produce fuel completely derived from crude palm oil.

Prabowo wants to see more energy produced from palm oil and ethanol derived from sugarcane. He also said the proportion of small farmers' holdings on oil palm plantations should be larger. Smallholders currently account for roughly 40% of the country's 12 million hectares of palm oil plantations.

"The presidential candidates seemed to have overlooked the significant environmental impact of palm oil and it looked like they would push for more land-based energy, without mentioning a plan to phase out of environmentally destructive, dirty energy," Walhi executive director Nur Hidayati said.

THE HAGUE: The UN's top court will announce Thursday whether it will allow a case accusing Myanmar of genocide against Rohingya Muslims to go ahead and if it will impose emergency measures to stop further violence.

The referral of the Budget Bill to the Constitutional Court will hamper government funding of development projects worth hundreds of billions of baht, says PM Prayut.

Unsecured pickup rolls off ferry into the sea

PHUKET: The owner of an inter-island ferry has agreed to compensate the owner of a pickup truck that slid off the boat and into the sea.