The Bank of Thailand warned the baht is likely to remain volatile and that it intervened in the market when the baht strengthened at a faster pace than economic fundamentals would suggest, helping business operators adjust, says a senior official.

The comment came after a meeting with the Thai National Shippers' Council (TNSC), which has called for the central bank to rein in the baht to ensure it moves in line with its regional peers, not creeping up to touch 30 to the US dollar.

The currency is tracking volatility in the global economy and financial markets, Vachira Arromdee, assistant governor of the central bank, said in a statement.

The baht's strength is mainly because of a weak dollar and Thailand's current account surplus, but its movement is still in line with other currencies in emerging markets and those of neighbouring countries, she said. 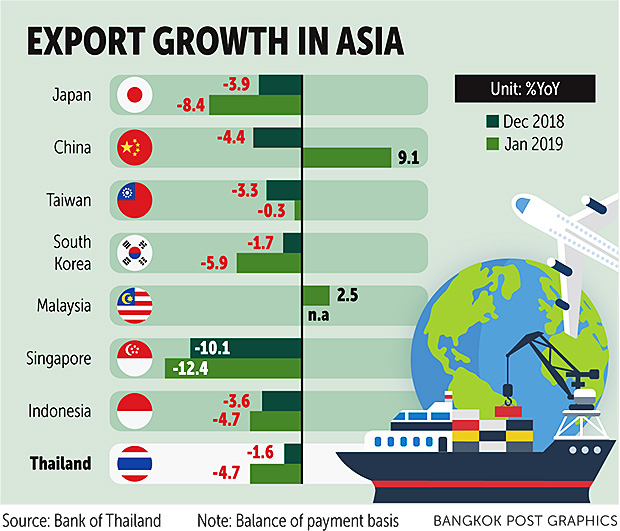 The baht's strength and volatility is in the middle range when compared with peers, said Ms Vachira.

The baht, which rose around 2.5% versus the greenback, has been the region's second-best performer this year after Chinese yuan. The baht soared to its highest level against the dollar in more than five years on Feb 20.

Ms Vachira said the impact of the firmer baht on the country's outbound shipments is minimal and correlation between the currency and exports remains unclear, as neighbouring countries' exports also fell even as their currencies appreciated at a slower clip than the baht.

The central bank and the TNSC agreed that global trade faces a greater challenge than last year, she said.

External factors, particularly the slowdown in trading partners' economies and operators' inventory deceleration out of fear of a trade war, have taken a toll on exports.

Exports for certain industries declined, including the electronics sector, weighed down by the trade dispute.

The country's export outlook in the period ahead depends largely on international trade and demand from trading partners, she said.

Amid the high volatility, Ms Vachira recommended operators with cross-border trade exposure use financial instruments to guard against foreign exchange risks, while operators can take advantage of the baht's strength by importing machinery and equipment to upgrade production and cut costs.

TNSC chairwoman Ghanyapad Tantipipatpong said shippers want the central bank to stabilise the baht to be in line with the currencies of regional and trading partners to maintain local business operators' competitiveness.

"The baht movement is in line with regional currencies and the current level is acceptable. But it should not strengthen past 30 baht to the dollar," she said.

Business operators have realised the baht's volatility is a result of the US dollar's retreat amid concerns over the US-China trade spat.

The TNSC is more pessimistic about the country's exports prospects this year amid growing external risks, saying the 5% growth forecast will likely be revised after the first quarter.

"We need to wait for official export data from the authorities before reviewing our growth forecast. Despite concerns about a contraction in the first quarter, we're trying to do our best to adjust strategies in terms of both goods and trading countries," said Ms Ghanyapad.

The Bank of Thailand has become cautious in its export outlook, predicting the country's payment-based outbound shipments will shrink in the first quarter after a year-on-year contraction in January exports.

The TNSC wants the central bank to expand the scope of local currency settlement to cover all Asean currencies. There are direct settlements with the baht and four other local currencies in Asia: yen, yuan, ringgit and rupiah.