Toyota, Honda and Nissan on Thursday declined joining the government's plan for a Thailand hub of 'eco-electric vehicles'.

Three Japanese car makers have passed on joining the government's scheme to promote electric vehicles, Eco EV, because they are not ready to adopt the new technology and have asked for a one-year extension, says the Office of Industrial Economics (OIE).

"Eco EV is aimed at closing any loopholes after the government launched the EV scheme in late March 2017, as the scheme should not be an obstacle to the current eco-car scheme," said OIE director-general Nattapol Rangsitpol. "The OIE has found that the existing EV scheme was ineffective at boosting mass-market production of EVs and localising the manufacture of EV-related vital components."

At the meeting the OIE failed to get a positive response from any of the three car makers.

Mr Nattapol said the companies reasoned that they should wait for the market mechanism to catch up and for excise tax incentives for EVs to expire in 2025.

"By 2025, Eco EV will not be appropriate for the technological landscape and Thailand's automotive industry will be far behind other countries", he said.

After the meeting, the executives did not divulge further details to the Bangkok Post.

Mild hybrid cars use the simplest EV technology -- they are essentially conventional cars with some degree of hybrid hardware, but limited use of hybrid features.

The full hybrid EV, meanwhile, is a vehicle that can run on either an engine, batteries or a combination of both.

"The mild hybrid under the Eco EV programme can offer prices ranging from 500,000 to 700,000 baht, equivalent to eco-cars that are available in the local market," Mr Nattapol said. 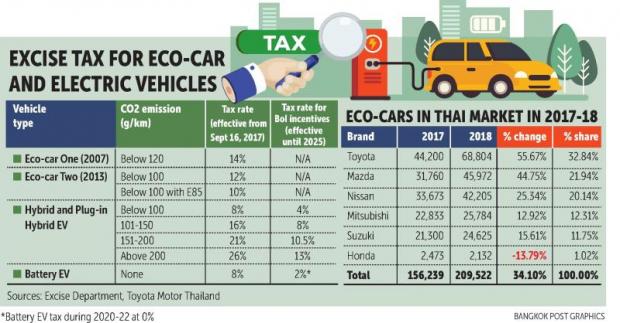 The programme is designed to lay down new rules for eco-car companies to localise the production of vital EV parts such as batteries, traction motors, battery management systems and drive control units.

According to the Excise Department, Eco EVs may be taxed at 4%, on a par with hybrid EVs and well below the eco-car tax of 10-14%.

With no accord at the meeting on Thursday, Mr Nattapol said the OIE will return to working on the programme with other eco-car companies that comply with the government's stance.

The government's eco-car scheme was issued in two phases, in 2007 and in 2013. Nissan, Honda, Mitsubishi, Suzuki, Toyota and Mazda signed up.

Mr Nattapol said the existing EV scheme is a "free and open ticket" for car makers, meaning they can invest in assembling any EV version for any vehicle segment.

"Locally there are only high-end hybrid EVs priced above 1 million, same as before the scheme," he said.