The Federation of Thai Industries (FTI) has strongly opposed a sharp minimum wage hike, a campaign promise of many political parties, saying small and medium-sized enterprises (SMEs) will suffer the most from the policy as it will alter the market.

Chon Buri, Rayong and Phuket have the highest rate.

Supant Mongkolsuthree, the FTI chairman, said business operators are concerned about the populist labour wage promises because they would increase operating costs across several industries. 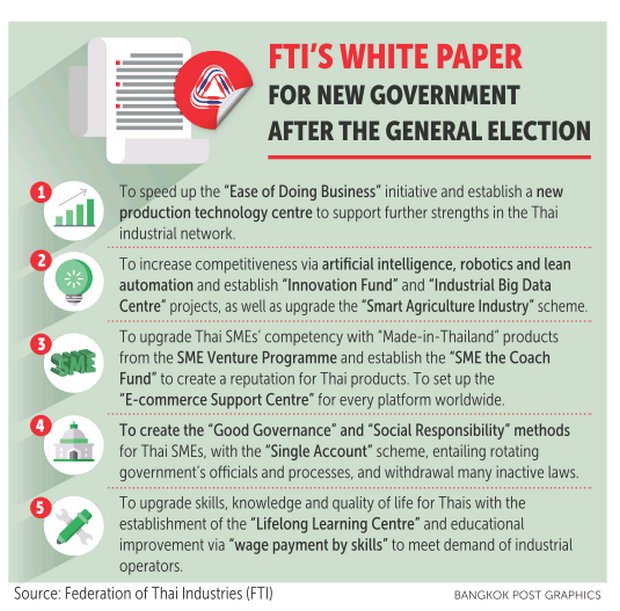 SMEs are expected to suffer the most from any wage hike.

"We already have high labour costs because of daily minimum wage hikes the past several years. There is not high demand for a sharp wage increase based on current sentiment," he said.

"Most companies already pay daily wages of over 400 baht."

The FTI is calling for the new government to reconsider their labour wage policies, with wage rises in line with business mechanisms to reflect actual labour costs, Mr Supant.

"The government should let economic circumstances drive the movement of labour wages, meaning a healthy economy can increase the rate naturally, with the floating method is better for every stakeholder," he said.

In the white paper, the FTI gathered many suggestions and development issues from business operators as they predict Thailand's industry development by 2025.

Mr Supant said the private sector is expecting the new administration to carry on existing or ongoing projects that benefit the country.

Business operators have high expectations the new government will use their roadmap to develop industrial efficiency and improve national competitiveness.

"The industrial sector is the key economic engine to drive the country and provide people with a higher income and employment, so the FTI wants the new government to maintain Thailand as Southeast Asia's industrial production hub," said Mr Supant.

Moreover, the FTI wants to increase Thailand's industrial competency through the use of higher technology and innovation for stronger competitiveness in global trade.

"Many parties are expected to be in the new administration, and the FTI wants them to listen to our opinions and cooperate to help the country progress," said Mr Supant.

He said the FTI expects the political situation after the election on Sunday to be calm, creating a stable environment for new investment flows to increase business and investor confidence.

Democrat leader Abhisit Vejjajiva said Thailand, as Asean chair in 2019, should work with other Asean countries to build negotiating power in talks with international technology companies such as Facebook, Line and Google. This could force them to pay corporate tax to operate in this region.

Startups and SMEs in the technology and innovation sectors should be subject to tax exemptions to encourage their business roles and create new unicorns in the region, he said.

"Many state agencies such as the Electricity Generating Authority of Thailand and PTT Plc should be spearheads to subsidise farm product prices," she said.

"Moreover, the country's oil consumption should move to biodiesel B100 to help take up surplus output of crops like palm oil and sugar cane."