The Fiscal Policy Office (FPO) looks set to slash its forecast for the country's economic growth this year to below 4% in April after a dismal export tally.

The Finance Ministry's think thank is concerned that exports, which the economy depends on, will fall far short of the FPO's estimate because of the slower global economy, said a source at the ministry who requested anonymity.

Although domestic consumption momentum is gaining speed, shrinking outbound shipments will not be offset, the source said. 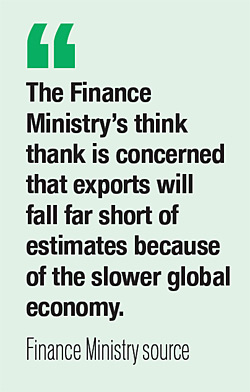 In January, the FPO forecast 4% economic growth this year, assuming an export expansion of 4.5% and domestic demand led by state and private investment.

The Bank of Thailand last week trimmed its 2019 growth forecast to 3.8% from 4% amid sluggish export demand. The central bank also slashed its projection for payment-based export growth this year to 3% from 3.8% predicted in December, while import growth was cut to 3.1% from 3.8%.

Customs-cleared exports unexpectedly rebounded in February after a three-month contraction, but the increase was largely due to a one-time shipment of arms for military drills and the transport of oil-related products and gold.

Thailand's outbound shipments rose 5.9% year-on-year last month to US$21.6 billion. Without oil-related products, gold and weaponry, exports would have contracted 4.9% from the same month last year.

Asked about the need for stimulus measures, the source said the Finance Ministry must see whether the economy cools down in the second quarter.

The government did not introduce additional economic stimulus measures this quarter as the election campaign entered full swing.

The source said the failure of the value-added tax (VAT) refund scheme for Chinese New Year shopping could be due to poor promotion and the requirement of registration for participation.

A mere 500,000 baht in VAT refunds was requested, far below the 10 billion baht targeted by the Finance Ministry.

Under the scheme, qualified shoppers who spent through QR code and debit cards during Feb 1-15 were eligible for a 5% VAT refund for every purchase of products and services that included VAT. The remaining 2% of VAT went to the government's coffers.