In search of unicorns
Business

In search of unicorns

Thailand trails Asean peers in the super startup race, mainly because investors are waiting for a truly great idea

With an eye on health care and education as the most promising sectors, Indonesia is expected to be home to five startups worth at least US$1 billion by the end of 2019. 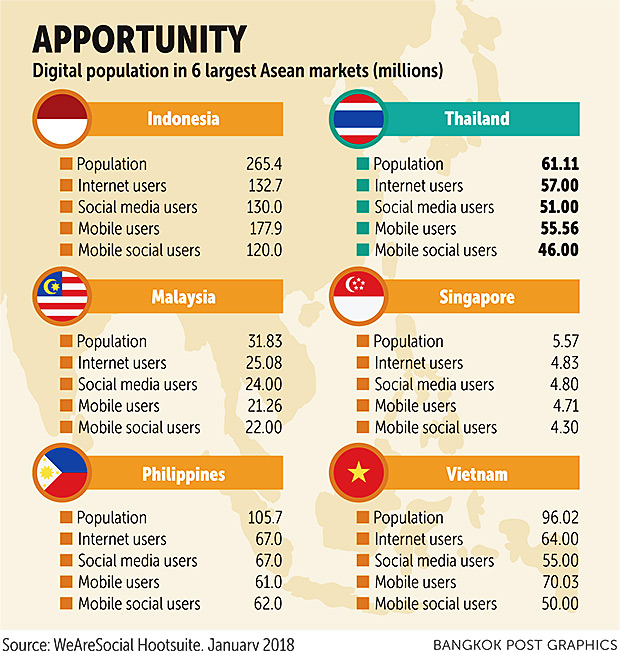 Singapore is close behind in the unicorn race with three big entrants led by the super-app Grab ($11 billion); Sea Group, the holding company for Garena, Shopee and Airplay (IPO valuation $4.9 billion), and the gaming hardware maker Razer ($4.4 billion). The city-state was also the birthplace of Lazada, the region's biggest shopping site, though it was started by the Germany-based incubator Rocket Internet and is now majority owned by Alibaba of China.

Other unicorns in the region include the Vietnamese online gaming platform VNG Corp, and the Filipino home builder Revolution Precrafted ($1 billion).

Many people wonder why Thailand, Asean's second largest economy, has yet to produce a 10-digit startup. The potential is certainly there, along with the required ingredients including talent, private money and government support. All that's needed is the right homegrown recipe to mix them all together and make a magical beast appear over the rainbow.

"We need to find the first one. Once we have the first one. I am sure, many will follow," Supachai Parchariyanon, the founder of RISE Accelerator told Asia Focus. An entrepreneur and online pioneer, he created the country's first mobile stock trading application, now known as Settrade Streaming.

RISE was established with a mission to help companies and governments in Southeast Asia innovate faster. Its local partners include Krungsri RISE, the first fintech accelerator in the country, and Depa RISE, a venture with the Digital Economy Promotion Agency that is helping hundreds of Thai startups to go abroad. It is also working with PTT Digital, an arm of Thailand's biggest energy company, on a regional accelerator operating in five Asean countries.

Thailand's startup scene has been growing, from just three companies and one fundraising round in 2012 to more than 90 businesses from 96 fundraising rounds in 2017. But there is still no unicorn in sight.

Some experts point to a lack of digital talent in the country and a domestic market that is only about one-quarter the size of Indonesia. But Dr Supachai says money is a big factor.

"If you look at Indonesia and Singapore, the reason why Grab and Go-Jek can hire big talents is because they have the funding and it all boils down to the ecosystem that we are trying to build," he said. "Once we are able to build the ecosystem, everything will come."

In his view, once one super startup emerges, others will follow. Alternatively, the founder of a pioneering venture might move on, using his or her expertise and funding connections to create another one, and so on. Therefore, the priority right now should be finding that first role model.

"What we need in our country right now is a role model, we need some success cases, and we are not too far away as some of the startups, I bet, in the next three years, you are going to see at least one go to an IPO," he said.

Dr Supachai agrees that market size has certainly helped Indonesia, given its population of 264 million. The same is true of China, home to nearly 1.4 billion people.

According to CB Insights, a New York-based tech market intelligence firm, of the 328 unicorns with a cumulative valuation of $1.08 trillion, around 100 are operating in China. They include Toutiao, a digital media company valued at $75 billion, followed by the ride-sharing firm Didi Chuxing ($56 billion) and the blockchain specialist Bitmain Technologies ($12 billion).

But India, with almost as many people as China, has only 13 unicorns on the CB Insights list, which again underscores the need for a high concentration of startup funding.

"What venture capitalists are looking at is something called a total addressable market, which means that if the addressable market is big, the startup will get bigger revenue and then its valuation goes up to become a unicorn," said Dr Supachai.

"Most of the unicorns in Southeast Asia do come from Indonesia. And if you are in China, anyone could become a unicorn by operating in just one or two provinces on the mainland."

In terms of the overall environment for tech-focused startups, Dr Supachai says he has seen improvement in terms of government support over the years and "everything is going well right now ... [but] you cannot build a Silicon Valley in a few years", he said, adding that he hopes the next government will continue some of the startup policies now in place.

"We are going in the right direction but we need to keep doing that. Please do not change direction when you change governments, just keep going in this direction," he said.

In the budget for the 2017-18 fiscal year, $312 million was allocated to the startup community through agencies such as Depa and others. Under the Thailand 4.0 economic model, incentive packages, different funding options and smart visas for talented specialists are also on offer.

Thailand had only one accelerator back in 2012. Now there are eight including RISE, SCB, Allianz Ayudhya, DTAC and others. But, the current number of accelerators is still small compared with the number of startups. From 2011 through mid-2018, a total of 279 startups raised $409 billion. One of them could become a unicorn faster than you think.