Thai shares shed 20.38 points as the country awaits the final results of the country's first election since the 2014 coup, while other Southeast Asian stock markets ended lower on Monday. 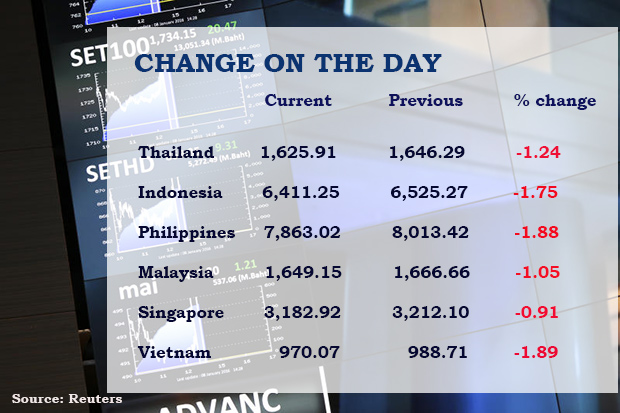 Cautious investors across the globe opted for safe-haven bonds as risk assets were rattled by fears of an impending US recession.

Concerns about the health of the world economy heightened last week after remarks by the US Federal Reserve, sending the 10-year treasury yields to the lowest since early 2018.

Meanwhile, data showed preliminary measures of manufacturing and services activity in the United States grew at a slower pace this month than in February, and dampened sentiment further.

Traditionally, an inverted yield curve -- where long-term rates slip below short-term -- has signalled a recession in the offing. Asian shares followed the broader global equities sell-off, with MSCI's broadest index of Asia-Pacific shares outside Japan dropping 1.5% to a one-week trough.

The overall winner of Sunday's election may not emerge for weeks because the EC has said it will announce the official results of the final 150 seats in the 500-seat parliament on May 9.

On a separate note, Thailand's annual manufacturing output in February is expected to have risen at a slightly faster pace than in the previous month, a Reuters poll showed.

Leading the declines in the region, Vietnam shares closed 1.9% weaker, with real estate stocks weighing on the index.

Philippines shares ended 1.9% lower, with losses in industrial stocks accounting for most of the declines.

Singapore shares fell 0.9% to their lowest close in nearly two months, after data showed that the city-state's core inflation rate for February eased to 1.5% from a year earlier.

The rate hit its lowest in nine months on expectations that the central bank will keep monetary policy unchanged when it meets next month.

BEIJING: Hundreds of flights at one of China's busiest airports were cancelled Tuesday as Shanghai raced to bring a local coronavirus outbreak under control.