Coalition of the chilling
Business

Coalition of the chilling

With a narrow divide between political factions and the lame-duck effect, business leaders don't expect much activity during the transition period

Thailand's much-anticipated general election is over, but the dust has not settled and the unofficial results have fanned anguish and uncertainty over who will form a new government.

With 100% of ballots counted, the Election Commission reported on March 28 that the pro-military Palang Pracharath Party (PPRP) won the popular vote with 8.4 million, topping the 7.9 million for the Pheu Thai Party. Voter turnout was 75%.

Although the EC indicated that this was 100% of counted votes, the results have not been endorsed by the EC yet and the official results will be announced on May 9.

The showdown between the Pheu Thai camp and a PPRP coalition is being called a battle between democracy and the military.

The two sides are rushing to negotiate with other parties to form a government coalition, hoping to carry out their own political agendas. 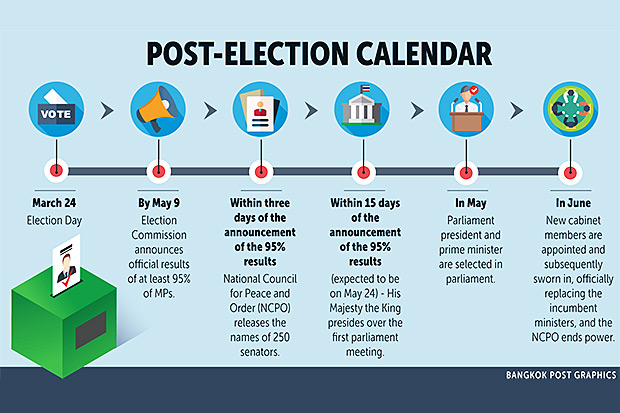 Although a new government coalition is not yet in place, the environment is not a political vacuum, unlike the absence of a functioning government during the Bangkok Shutdown in 2014 when the Yingluck Shinawatra government was relegated to caretaker status.

The military-led government has full administrative authority as mandated by the 2017 constitution, said Amonthep Chawla, head of research at CIMB Thai Bank.

"Investors could adopt a wait-and-see stance and private investment could ebb to a certain degree in the second quarter," Mr Amonthep said.

While some see the election as an attempt to restore democracy in Thailand, the 2017 constitution, drafted by a committee headed by veteran legal analyst Meechai Ruchuphan, ensures the military's firm grip in the post-election period.

Most of the 250 senators will be appointed by the junta's National Council for Peace and Order (NCPO), and they are allowed to choose the next prime minister for a five-year period that starts when the next government convenes.

The 2017 constitution also stipulates that the NCPO shall hold office until the new cabinet takes office. During the transition period, the NCPO still has use of the constitution's Section 44, which bestows supreme authority. 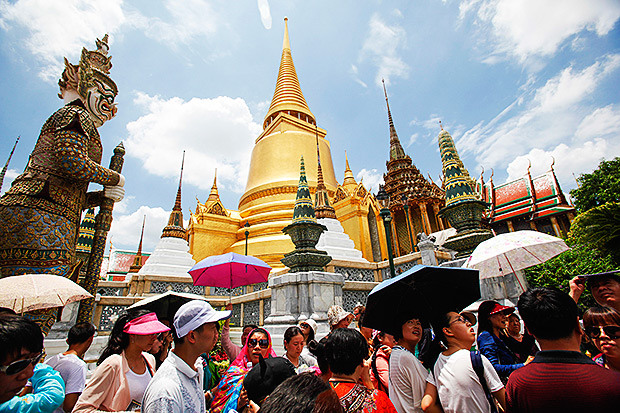 More incentives are being urged to help boost tourism in the coming months. (Photo by Pattarapong Chatpattarasill)

"The twisted formula of the 2017 charter may work for a while to enable Gen Prayut Chan-o-cha to stay in power, but he may not last long because the constitutional provisions are so restrictive that they are likely to lead to a parliamentary stalemate," said Thitinan Pongsudhirak, an associate professor at Chulalongkorn University.

There remains much investor uncertainty over how the politics will shake out during the race for a coalition.

Instead of implementing economic stimulus measures during the new government transition period, the Prayut government should boost investor confidence by ensuring that major infrastructure investment projects will continue under the new government, Mr Amonthep said.

"Investors are not really interested in politics, but rather policy continuity, as they have business interests and need to ensure shareholders' benefits," he said.

No matter which government coalition comes to power, the crux of their economic policies could be similar if they both continue providing state welfare schemes and trying to stimulate consumption among the middle class and low-income groups, Mr Amonthep said.

The Eastern Economic Corridor (EEC) investment projects are unlikely to change drastically because some have already started and they can be beneficial for the country's development going forward, he said.

There is no political vacuum because the Prayut government still acts as a de facto government until a new one is formed, said independent academic Somjai Phagaphasvivat.

The incumbent government is a "lame duck" because it cannot execute policy efficiently even though it has the constitutional mandate to do so, Mr Somjai said.

In politics, a lame duck is an elected official whose successor has already been elected, meaning the official has less influence because of a limited tenure and the people having chosen an alternative.

The public could perceive that the military-led government wants to remain in power for an extended period after the election if it implements any stimulus policies, Mr Somjai said. 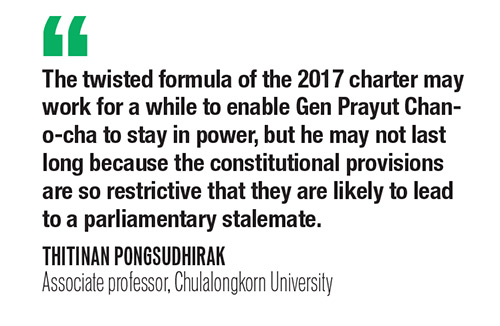 Investors might also be suspicious of the incumbent government's motives in passing new policies, he said.

Although some EEC projects could be altered, most are not expected to be affected going forward because the political parties are in unison that the EEC is an important initiative to enhance Thailand's Eastern Seaboard and connectivity to neighbouring countries, the independent academic said.

The EEC is the military-led government's flagship investment scheme, spanning the eastern provinces of Chon Buri, Rayong and Chachoengsao.

The government hopes to complete the EEC by 2021 to create a hub of technological manufacturing and services connected to Asean by land, sea and air.

On Feb 8, 2018, the National Legislative Assembly passed the EEC Act.

Despite years of press coverage for the EEC and government promotion, contracts have not been awarded to companies for most of the major EEC projects, including the U-tapao airport expansion, an aviation maintenance, repair and overhaul (MRO) centre, and infrastructure development at Map Ta Phut and Laem Chabang ports.

"The transition period is merely a psychological factor," Mr Somjai said. "Investors are focused on the long-term outlook, although new developments could factor into any government coalition."

For the short term, the new government should exhibit stability to shore up market confidence and attract foreign direct investment flows, said Paiboon Nalinthrangkurn, chairman of the Federation of Thai Capital Market Organizations.

Though a government coalition is expected to eventually take office some time this year, government stability is a key concern for all stakeholders.

It's unclear how long any stability would last because the two nascent coalitions have roughly the same number of votes, making gridlock likely, Mr Paiboon said.

If Pheu Thai is able to set up a coalition, the number of combined MPs could be just over half of the 500 total MPs in the lower house. It remains unknown whether the appointed senators would vote for a Pheu Thai-led coalition's prime ministerial candidate. 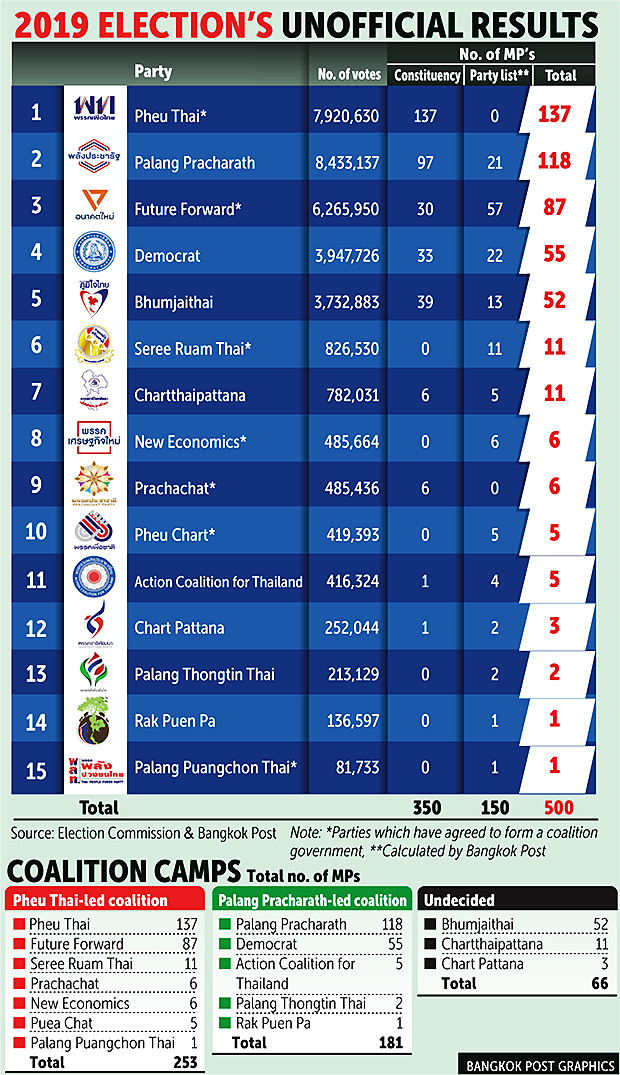 Any new government needs parliamentary support to pass legislation and new policies, but it looks like there will be a healthy opposition coalition if a new government is formed, he said.

Although a political vacuum is unlikely, he said, a protracted transition period is not helpful because the government during that time would not be able to accomplish much.

Mr Somjai said that in addition to fragile government stability if the lower house lacks a majority coalition of MPs, domestic political conflicts could flare up after the election dust has settled.

"Once the honeymoon period is over, political conflicts will likely return because Section 44 will no longer be in place," he said. "Such conflicts are not expected to be as violent as those in 2014, but there will be constant undercurrents [to ignite instability]."

Tada Phutthitada, president of the Thai Bond Market Association, said the country's private investment level has been low for many years as businesses and investors seek a clearer picture for Thailand's development direction, except for the export sector.

Despite the much-touted Thailand 4.0 strategy meant to cement a foundation for the country's long-term development, there are many details to work out such as setting priorities for which industries the country should focus on in the initial phase, Mr Tada said.

"Thailand missed the mobile phone trend in the past," he said. "If the country wants to attract greater private investment, authorities must specify clearly the investment direction to enhance competitiveness."

Boonkiet Chokwatana, chairman of ICC International Plc, the marketing arm for fashion under Saha Group, said it would be quite difficult for the incumbent government to issue any measures during the transition period before a new government is formed.

He proposes that the incumbent administration set up a special communications team to answer international and domestic inquiries about the general election's results for the sake of the country's image.

"I think once the country's politics have stabilised, good things will ensue," Mr Boonkiet said. "After the election, consumer sentiment should improve without the need for stimulus measures."

Worawoot Ounjai, president of the Thai Retailers Association, said his group believes that state officials are unlikely to perform their duties as they should during the transition period because they don't want to risk trouble once a new government is formed.

"However, the incumbent government should not stand idly by, as it could issue measures to promote the tourism sector, inviting foreigners to travel here during Songkran in April and promoting the upcoming royal coronation scheduled for May 4-6," Mr Worawoot said.

The Cabinet on Tuesday approved new borrowing of 1.34 trillion baht in the 2022 fiscal year starting in October, a government spokesperson said.