In a first, Samsung chose Thailand to take part in Wednesday's global launch of two mid-range smartphones -- the segment in which the South Korean firm's Chinese rivals are eating into market share most heavily.

To compete in this price tier dominated by Chinese makers like Oppo and Huawei, Samsung introduced the Galaxy A-series A70 and A80 models, the latter retailing for a little over 15,000 baht. Both feature Samsung's first rotating camera for selfies. 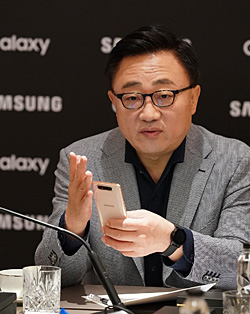 "Thailand is one of the most important markets in Southeast Asia for Samsung, and we admitted that Chinese brands are getting more popular in the market," said DJ Koh, president and chief executive for IT and mobile communications at Samsung Electronics.

In Thailand, millennials and Gen Z will account for 50% of the workforce and become the most important consumer segment by 2025.

"This is why we chose Thailand to launch our new flagship products to win millennial users, as the young Thai generations like to embrace new things and love social media to share their lives in real time," Mr Koh said. "We've worked on launching a new product to 'wow' Thai millennials.

"Consumers might find it boring to eat the same menu and may want to try others, but soon they will go back to their favourite dish, like tom yam kung. We will try our best to bring them back within three months."

Samsung has partnered with K-pop group Blackpink as the first global brand presenter. The company expects to launch the first 5G smartphone in Thailand by early 2020.

"From 2019 it will be the era of 5G, and people are interested in how 5G will change their lives with faster speeds and low latency that bring a new immersive experience," Mr Koh said. "Samsung's role is to find the best uses of 5G and AI technology to lead the new era."

Smartphones are a saturated market, but the coming 5G and AI revolutions will help stimulate consumer demand in the next 10 years, he said. 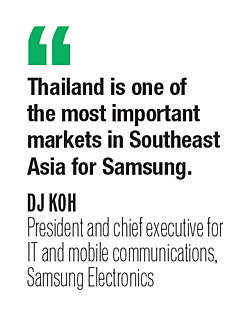 "Massive change will happen in the next 3-4 years," he said, "and smartphone makers who can innovate phones that consumers find acceptable in the 5G and AI age will become the winner."

Samsung has a total 5G ecosystem with chipsets, devices, software and AI alongside consumer electronics products that work on its open platform and can sync with other devices.

Samsung recently launched its first 5G smartphone in South Korea and plans to introduce it in mid-May in the US and in June in Europe.

Juthamas Tangtatpongsathorn, an analyst at IDC Thailand, said Samsung's smartphone shipments in 2018 fell to 700,000-800,000 units in the third and fourth quarters from an average of 1.5-1.6 million units.

Sales dipped for the J-Series, retailing for 5,000-7,000 baht, while Oppo increased shipments during the period to 1 million units per quarter.

Samsung faces more competition from Oppo in the mid-range market, while Huawei beat the Galaxy S and Note 9 in the high-end market in the fourth quarter, Mr Juthamas said.

Overall in 2018, Samsung remained the market leader in Thailand.