Struggling to get 5G right
Business

Struggling to get 5G right

Keeping up with the rest of the world is costly, and doubts remain over whether Thailand is prepared

As the nation's telecom operators race to develop 5G infrastructure in a timely manner, the government is finding ways to subsidise development by delaying payments for past auctions and changing the sales process for the next round.

This has sparked debate on the efficacy of such actions and whether Thailand is falling behind in creating infrastructure that will set the standard for future technological advancement.

Thai telecoms have been reluctant to invest and develop 5G, as some see the country as unprepared for the new generation and do not see adequate demand for pricey infrastructure. The companies lobbied the government through the National Broadcasting and Telecommunications Commission (NBTC) to extend their last payment of licence fees to provide relief from exorbitant payments in exchange for joining the bid for the 5G spectrum auction.

The government's Section 44 decision gave both telecoms and digital TV operators financial relief and room to adapt to a rapidly changing digital economy.

Some experts are sceptical of the government's action, saying the move could cost the state as much as 19.7 billion baht in lost revenue, too great a cost to the public.

Through the use of Section 44, the last term of licence payments for Advanced Info Service (AIS) and True Move H Universal Communication (TUC), at 60 billion baht each for 900MHz due in 2020, will be due in 2025 -- adding another five-year instalment period.

"In exchange, the winning bidders must participate in the planned 700MHz spectrum allocation for sales scheduled in June," the government said.

Total Access Communication (DTAC), through subsidiary DTAC Trinet, also had the last term of its 900MHz licence payment of 30 billion baht delayed from 2021 to 2026. DTAC Trinet won the 900MHz licence in an auction last year.

DTAC's licence comprises 5MHz of spectrum bandwidth on the 900MHz range, compared with 10MHz each for AIS's and TUC's licences. 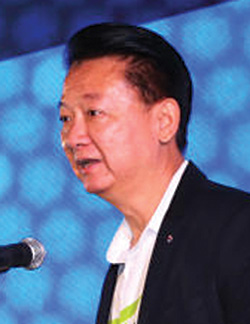 Weerawat: AIS to submit proposal by May 10

More importantly, Section 44 lets existing digital TV operators walk away from the business without any obligations to the state.

Digital TV operators that want to exit the segment will have to submit a proposal to the NBTC by May 10, or 30 days after Section 44 was invoked.

"The failure of terrestrial digital TV businesses in the country mainly came from the delay of free set-top-box distribution to viewers for six months after broadcasting, impractical MUX networks and an oversupply of channels," said Suphap Kleekachai, president of the Association of Digital Television Broadcasting.

He said the system was also impacted by fast-changing communication technologies, especially other broadcasting platforms, particularly social media networks such as YouTube and Facebook.

IN NEED OF AID

"The assistance to both digital TV operators and telecom operators is reasonable, not only because it will resolve deadlock in both sectors, but it's in line with Section 27 of the amended Frequency Allocation Act [NBTC law]," Mr Suphap said.

He said Section 27 rules that the regulator must recall spectrum slots, many of them held by state agencies, that are not efficiently being used, for reallocation.

The new law lets the regulator pay compensation to spectrum holders to facilitate greater arrangement of spectrum as a national resource. 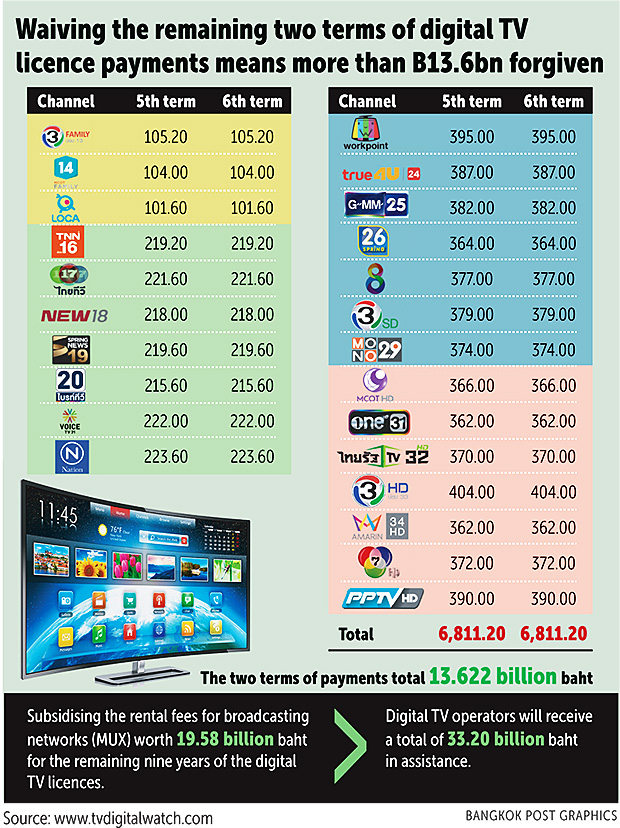 The 700MHz range, which is being used by digital TV operators, would be recalled and moved to the 470-510MHz range, opening up the 700MHz band to be used for 5G.

"The adoption of 5G needs direct investment from telecom operators to install all related infrastructure, devices and systems, as well as proper spectrum ranges, not only state investment," Mr Suphap said.

He said assistance from Section 44 could attract major telecom operators to buy 700MHz bandwidth in exchange for longer payment terms of their 900MHz licences.

The NBTC is scrambling to draft conditions on how best to allocate the 700MHz spectrum to the top three mobile operators, which must submit their proposals to the NBTC by May 10. 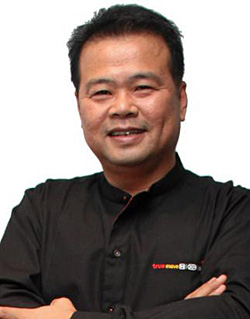 Adhiruth: True’s board will decide matter

After the NBTC completes the draft, mobile operators could still withdraw their proposal to buy the 700MHz licences if they aren't happy with the sale's terms and conditions.

If they withdraw the proposal to acquire the 700MHz licence, they will have to pay the 900MHz licence payment under the original time frame.

Weerawat Kiattipongthaworn, chief corporate officer of AIS, said the company is likely to submit a proposal by May 10 because the NBTC provides the option to withdraw later, but it will have to be approved by the company's board.

Additionally, commercial 5G implementation in the country may have to wait another two years because there needs to be a functioning system including business use cases related to 5G tech in the Thai market. This is because 5G is not just business-to-consumer (B2C) through mobile phones, but business-to-business (B2B) as well, in which various industries will be buying access to the 5G network in order to run 5G connected devices in factories farms and offices.

Adhiruth Thotaveesansuk, vice-chairman of the executive committee of True Corporation, the parent firm of TUC, said the company cannot give a clear answer but True's board will form a resolution. 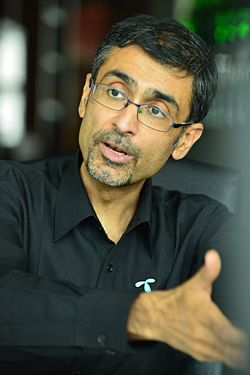 Specifically, 5G adoption needs at least 100MHz of bandwidth to make the service work efficiently, meaning 5G spectrum cost should not be an excessive financial burden to operators.

Each operator has spent abundantly for nationwide 3G and 4G network roll-outs, and high spectrum costs in the future will create a barrier to 5G adoption.

Mr Vichaow gave the example of China, where mobile operators have no critical burden for investment but the Chinese government gave away 160MHz of bandwidth to operators providing 5G, another 100 MHz to China Telecom and 100MHz to China Unicom.

The move was to enable 5G adoption in China ahead of other countries.

Rajiv Bawa, chief corporate affairs and business development officer of DTAC, said the company will start a dialogue with the NBTC to seek more clarity on the order before deciding the next step.

As previously stated, DTAC urged the NBTC to publish a clear spectrum roadmap, including time for allocation and fair valuation of available spectrum, before discussing any further auctions.

DEAL OR NO DEAL?

Pisut Ngamvijitvong, a senior analyst with Kasikorn Securities Co, said KS recommends all mobile incumbents agree to buy 700MHz spectrum licences, even at a higher-than-expected price of 25 billion baht per licence for 15MHz of bandwidth. 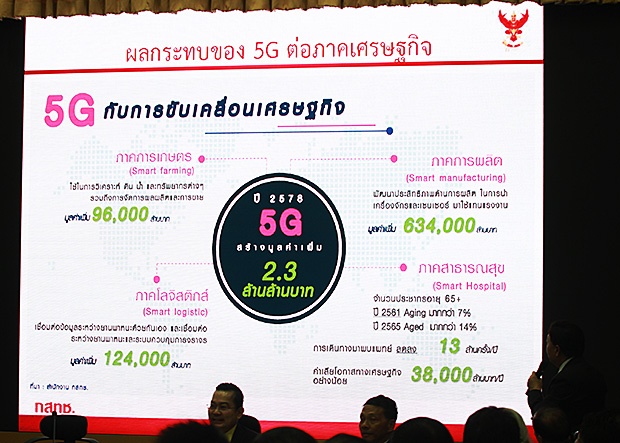 A chart presented by the NBTC shows how 5G has an impact on the economy. (Photo by Somchai Poomlard)

Although the savings from 900MHz payment deferrals may not offset the sale price, the market should not ignore the value of retaining the three-player market structure at least throughout the 5G era.

"We expect the market to penalise any telecom operators that do not accept this allocation," he said. 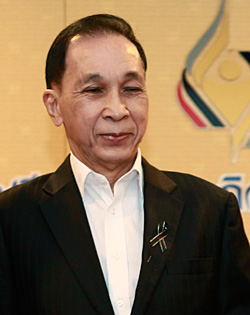 KS's positive sector view assumes that mobile phone players accept the 700MHz allocation. True remains the top sector pick because it should be the prime beneficiary of the Section 44 scheme.

"The preliminary price of 25 billion baht for a 700MHz licence with 15MHz per licence is 67% higher than our initial guess of 15 billion baht," Mr Pisut said. "We believe such a high price will guarantee enough funds to bail out digital TV operators."

Jesada Sivaraks, head of government and industry relations at Ericsson Thailand, the local arm of the telecom infrastructure giant, said the government should worry less about making money from the 700MHz auction and more about how to best serve the economic development of the nation.

"The spectrum is not just a way to make money; the government should be looking at the best way to use the spectrum," he said. "Thailand has good 4G coverage, but speeds are very slow, especially in rural areas."

Mr Jesada said that instead of using the 700MHz for 5G, telecom companies should instead use the extra spectrum to improve speeds on their 4G networks, especially in rural areas where speeds are lagging behind.

Development of 5G can wait because the government still needs to put out a proper spectrum roadmap and the business ecosystem around 5G must further develop to make the costly infrastructure worth the expense, he said.

Some academics and the Consumer Protection Party strongly oppose the Section 44 telecom move, saying it would cost the state 19.7 billion baht because the three companies benefit from reduction of capital costs via the extension of their last payments for the 900Hz licences for another five years.

The reduced cost of capital comes with no interest to the three operators throughout the new payment term. The companies also benefit from suffering no costs from equity financing, as the operators would not need to raise capital through the sale of shares for the original payment term. 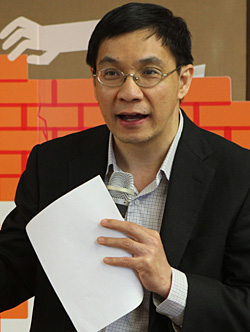 Somkiat Tangkitvanich, president of the Thailand Development Research Institute, said AIS would benefit to the tune of 8.3 billion baht under the new payment terms, True Move would be helped by 8.7 billion, and DTAC would benefit 2.5 billion.

"The interest cost and cost of equity financing could be called as weighted average cost of capital [WACC] based on present value year-on-year," he said.

He said the people and the state will lose out on the deal, while business tycoons and investors have the most to gain. Section 44 may also be a breach of power by the government, which has already been flaunting its authority before and after the election, he said.

Saree Aongsomwang, secretary-general of the Foundation for Consumers, said Section 44 will hurt competition and further cement the big three mobile operators as the only players in town.