The repaired rail link between Aranyaprathet and Poipet was reopened on Monday, 46 years after it was closed by a civil war that destroyed Cambodia's railway infrastructure.

Speaking at the opening ceremony at the border, Prime Minister Prayut Chan-o-cha said the re-established train link between Klong Luek station in Aranyaprathet district of Sa Kaeo and Poipet station in Cambodia will boost transportation, border trade, tourism, and business and investment opportunities.

The rail link underlined the two government's pledged "partnership for peace and prosperity" on the border.

Cambodian Prime Minister Hun Sen called the restoration of the rail link, which was cut off in 1973, both historical and strategic.

Symbolising the partnreship, Gen Prayut and Hun Sen rode together on the four-carriage train from Klong Leuk to Poipet. The train was donated by Thailand, marking the reconnection of the track. (continues below) 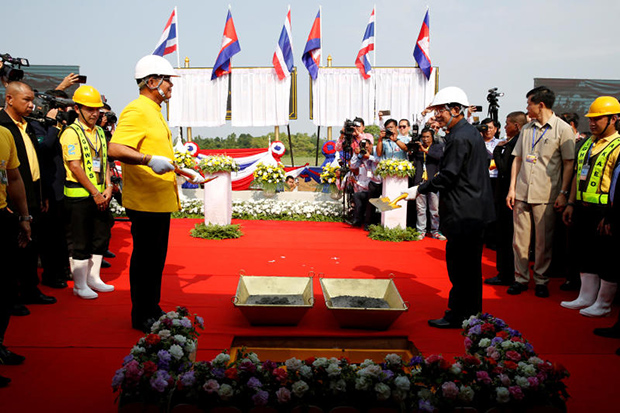 Prime Minister Prayut Chan-o-cha and his Cambodian counterpart, Hun Sen, during the ceremonial opening of a friendship bridge between Ban Nong Ian and Stung Bot in Cambodia on Monday. (Reuters photo)

Regular services on the line are planned to begin later this year, after the two countries agree on train transport regulations.

Border trade between the two countries was 145 billion baht last year, 62% of if going through the Aranyaprathet-Poipet land crossing, according to the Foreign Trade Department.