February uptick due to one-off shipments

Thailand's exports remain in the doldrums, with the performance in March dropping after an unexpected increase in February.

The Commerce Ministry reported on Monday Thailand's customs-cleared exports fell 4.88% year-on-year in March to US$21.4 billion after a 5.9% rise in February to $21.6 billion.

The uptick in February was largely due to a one-time shipment of arms for military drills and the transport of oil-related products and gold.

Without oil-related products, gold and weaponry, exports would have contracted 4.9% in February from the same month last year.

Pimchanok Vonkorpon, director-general of the Trade Policy and Strategy Office, said March's contraction was largely because of a slowdown in global trade and economies.

Ongoing trade disputes between the US and China have had direct and indirect impacts, undermining trading partners' economies, especially those closely related to Chinese supply chains such as Hong Kong, South Korea and Taiwan, she said. 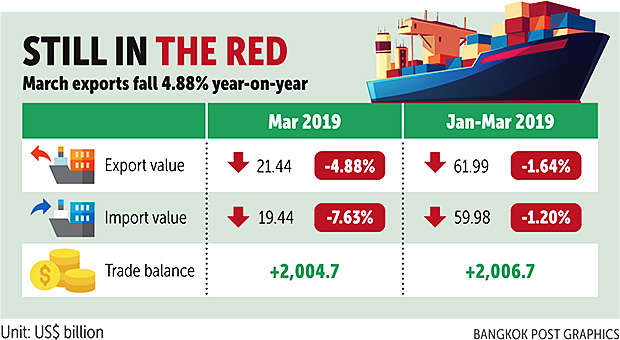 On the import side, the value in March decreased by 7.6% year-on-year to $19.4 billion, resulting in a trade surplus of $2 billion.

"Projections for Thai exports coincide with the global outlook, which still faces downside risks including a recent global trade slowdown, ongoing trade disputes and falling commodity prices," she said. "On the bright side, major economies have implemented significant policy accommodation, which will hopefully support an increase later this year, such as a stabilised policy rate in the US, more accommodative monetary policy in the EU, Japan and the UK, and monetary and fiscal stimulus in China."

The ministry is still maintaining an export growth forecast of 8% this year after a 6.7% increase in 2018.

The government and private sector should thus put more effort into finding new markets to boost export growth this year, she said.

The TNSC early this month cut its own export growth forecast to 3% this year from the previous 5%, citing the global economic slowdown, the Brexit impasse and the trade row between the world's two biggest economies.

The council also raised a possible hike in the daily minimum wage as a key area of concern for exporters.

If the new government raises the daily minimum wage to 400 baht a day as pledged, without workers upgrading their skills, the country's export prospects will face added risk because production costs for local manufacturers and exporters will increase, she said.