WASHINGTON - As they continue to feel the impact of US trade wars and struggle to find workers, American companies have rolled back their growth estimates for this year, according to a survey released Monday. 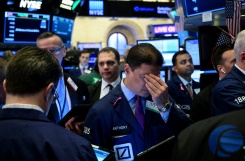 The US economy will continue to grow but "barely half" of the business economists surveyed now forecast GDP to expand by more than two percent this year, "compared to 67% of respondents in the January survey," according to the semi-annual survey by the National Association for Business Economics.

Most of the rest expect the economy to grow by 2 percent or less, the survey showed. The government on Friday reported that the US economy expanded 3.2 percent in the first three months of the year but many economists say that pace cannot be sustained.

At the same time companies in the NABE survey continue to try to adjust to the impact of retaliatory tariffs on American goods and to US tariffs on imports that have raised costs.

"A year after the US first imposed new tariffs on its trading partners in 2018, the recent tariffs have negatively affected more than one-fourth of respondents' firms," NABE President Kevin Swift said in a statement.

But three-quarters of goods-producing firms reported a negative impact, with 67 percent of manufacturers indicating they had faced higher materials costs and half have raised prices of their products, the survey showed.

In addition, 42 percent reported negative sales and a third said they had delayed planned investments.

With the US unemployment rate at historic lows, labor shortages continue to dog the companies surveyed, prompting nearly half to raise wages or take other steps to adjust.

Nearly 80 percent of firms said they were having difficulty finding high-skilled workers, while half face shortages of mid-skill workers.

In the manufacturing sector, 60 percent of firms have raised wages while half have lowered requirements for new hires.

'Billy' murder suspects plead 'not guilty' ahead of trial

Chaiwat Limlikit-aksorn, the former chief of Kaeng Krachan National Park, and three other defendants on Monday pleaded not guilty in the case brought against them in court in connection with the disappearance and murder of a Karen rights activist back in 2014.

The education minister has instructed a boarding school in Phetchabun's Muang district to punish students involved in the sexual assault of female pupils in its dormitory on Aug 24, if found guilty.