Chinese bank profits rise, but so do bad loans
Business

Chinese bank profits rise, but so do bad loans

SHANGHAI - Profit at China's biggest banks accelerated in the first quarter in line with a better-than-expected performance in the domestic economy, but rising bad loans may pressure authorities to ease up on pump-priming measures. 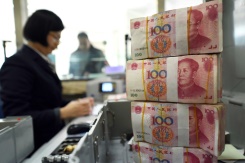 Industrial & Commercial Bank of China (ICBC) -- the world's largest bank by assets and several other yardsticks -- posted a net profit of 82.0 billion yuan in the January-March period, up 4.1 percent.

China Construction Bank logged a 4.2 percent rise to 76.9 billion yuan, while the remainder of the "Big Four" banks -- Bank of China and Agricultural Bank of China -- saw similar percentage increases.

With the economy slowing and China's stock markets among the world's worst in 2018, the government embarked on a massive stimulus programme in the first quarter, at least partly to buffer the country from its trade war with the United States.

Markets have since rebounded and the economy beat expectations with 6.4 percent first-quarter growth.

But various recent government statements have been interpreted as signs that the flow of credit will be more closely scrutinised to prevent overheating, causing the benchmark Shanghai Composite Index to drop more than five percent since closing at 2019 high of 3,270.80 on April 19.

The official caution could intensify due to rising bad loans.

ICBC's non-performing loans rose 5.2 billion yuan in the quarter, which Bloomberg News said was the largest quarterly increase in nearly three years, while bad loans at China Construction Bank rose by 6.6 billion yuan, the highest since 2016.

"The level of bad loans that we are seeing in Chinese banks, that’s coming through and hitting their income statements every year and forcing them to set aside more provisions, is really quite elevated," David Marshall, a senior analyst with CreditSights told Bloomberg Television.

"The good thing is that the economy seems to be stabilising this year thanks to the government stimulus measures," he said, though he adds credit growth "could tail off" in the second half.

Caught in a vicious currency cycle

More than 6 million internationals visited Thailand this year with a 90% surge last month alone when compared to average figures, according to officials.