Mrs Tipsuda says the capital market should prepare for a digital future. (Photo by Somchai Poomlard)

One significant change to the Act, in effect since April 17, is expanding the coverage scope for scripless transactions to cover the primary market for all types of securities.

The previous coverage applied only to the secondary market, SEC deputy secretary-general Tipsuda Thavaramara told the Bangkok Post in an exclusive interview.

"This change will have a major impact as the amended Act provides a legal basis to support [the country's capital market] the tokenisation platform," said Mrs Tipsuda.

She said fundraising through securities issuance is likely to gear towards digitisation at a greater pace in the future.

"We have two challenges: preparing for the digitised world and facilitating new players and ideas in the capital market," said Mrs Tipsuda.

Scripless transactions were previously allowed only in the secondary market. 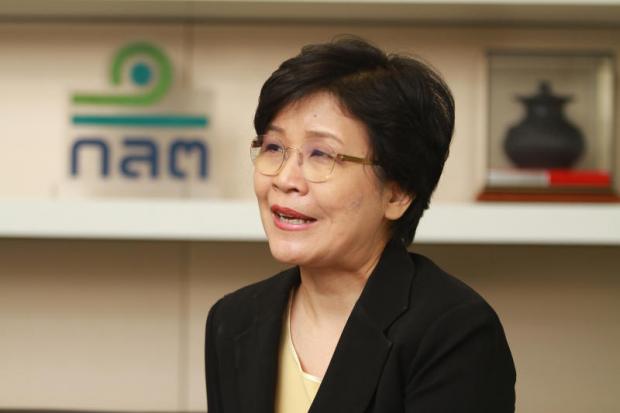 Under the amended Act, a tokenised securities depository platform and issuance of digital shares in the primary market are possible, while the legal framework facilitates a digital fundraising instrument called securities token offerings, a type of blockchain-driven financial security that gives investors some rights to the company.

Since May 14, 2018, startups or companies wanting to raise funds by issuing utilities tokens or investment tokens have been able to raise funds through tokenisation under the digital asset royal decree, which covers all aspects of the virtual trade.

Exchanges, brokers and dealers are required to apply for licences from the Finance Ministry, while ICO portals must be approved by the SEC.

Those involved in the digital asset trade have commented about unclear taxation on capital gains and returns received from digital asset investment, saying digital tokens would be a better fit if covered by the Securities and Exchange Act.

But the drawback of the decree is how the law has some technical overlying characteristics with the Act, she said.

Digital tokens are created for a different purpose, specifying the right of a individual in two main categories.

The second is the right to acquire specific goods, services, or any other rights under an agreement between the issuer and the holder. This is called a utility token. 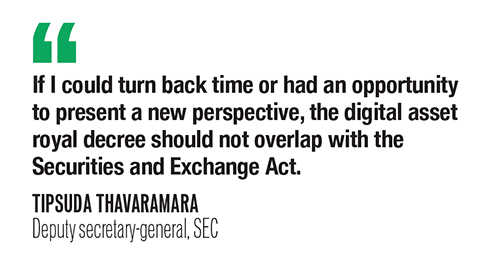 "There will be two paths to walk: securities and digital assets," said Mrs Tipsuda.

"If I could turn back time or had an opportunity to present a new perspective, the digital asset royal decree should not overlap with the Securities and Exchange Act," said Mrs Tipsuda.

Depending on their substance and relevant rights given, tokens issued under the Thai regulatory framework can fall under either the Securities and Exchange Act or the digital asset royal decree, according to the SEC.

If the token's underlying asset is deemed to be securities as defined under the Securities and Exchange Act, it will continue to be governed under the Act even if it is issued via a digital process.

If, however, the token is not deemed as having securities features, it will be governed by the digital asset royal decree.