Business leaders share experiences and turnaround stories based on dedication to data and innovation. By Nareerat Wiriyapong in Las Vegas

Business transformation is essential for companies to cope with continuous changes in the global marketplace. But transformation isn't easy. Only those that have the ability to adapt will survive and thrive.

Adobe Inc is one company that has gone through many waves of change to become a global leader in desktop software with notable products including Photoshop, Illustrator, After Effects and Acrobat. Established in 1982 by John Edward Warnock and Charles Geschke, the California company set out to revolutionise the printing business, specifically prepress operations including typesetting and preparing pages for production.

The co-founders created PostScript, the first truly international standard for computer printing. In the mid-1980s, it entered the consumer software market with Illustrator, a drawing program for the Apple Macintosh. That in turn helped popularise PostScript-enabled laser printers.

In 1993, Adobe introduced PDF, the portable document format, and its Acrobat and Reader software. More content creation and editing products followed, some developed in-house and others brought onboard through acquisitions. As more users migrated from desktop computers, Adobe stepped up investment in applications for mobile devices, and now it is heavily committed to cloud services as well.

"Along the way, Adobe continued to change the product portfolio and really looked at how we can change the business model to adapt to the new environment. Our business continued to grow through that whole period," recalled Bryan Lamkin, who joined the company in 1992 and is now executive vice-president and general manager for Digital Media, responsible for Asia Pacific. 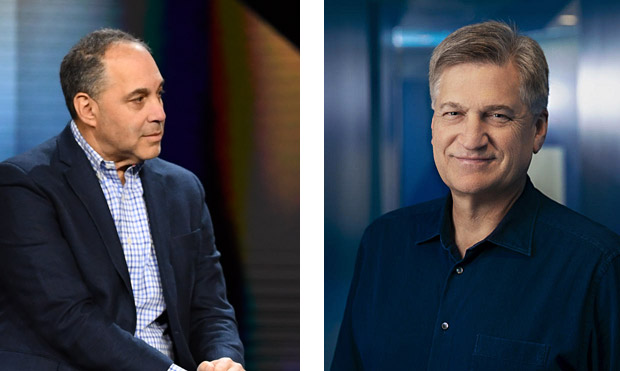 From left: Chegg CEO Dan Rosensweig has transformed the company from one built around physical textbooks to a digital learning centre; Adobe turned itself around by stepping up the pace at which it brought innovations to market, says Bryan Lamkin, executive vice-president and general manager for Digital Media.

He recalled that the financial crisis in 2008 was a major challenge for Adobe, as creative markets were hard hit. "Our business went down by 15-20%, and we took a step back and thought about why our business got hit harder than others. Some of our peers weathered that storm better than we did," he told Asia Focus.

"Then we realised that they have a higher percentage of recurring revenue. Ours was 17%. Their average was probably 35% to 40%."

Adobe knew that it delivered value to customers, he said, "but how we deliver it in a way that makes our business more predictable" became the challenge.

The big problem was that the Adobe business model was based on delivering major software upgrades every 12 or 18 months, which had served the company well for a decade. But the pace of change had picked up.

"We were profitable but we weren't growing in line with the explosion of content that was being created," said Shantanu Narayen, Adobe's president and CEO. "The product cycle was too slow to keep up with the pace of innovations that our engineers wanted to deliver.

"Then we realised that despite all our success, we had a unique opportunity to completely reimagine the creation of a product ecosystem, our business model, as well as our engagement with customers. So we decided to innovate at a faster pace to an entirely new way to reach our customer with Creative Cloud. The decision profoundly changed our relationship with our customers and how we operate our business."

The subscription model, he said, puts the customer experience front and centre, delivering a continuous stream of innovation and focusing on earning customers' trust every single day.

Mr Lamkin acknowledged that winning trust from its customers, employees and the financial community was difficult at first.

"Initially our employees questioned the wisdom of the strategy and we spent a lot of energy talking to them, walking them through the strategy, making them understand why it's good for the customers and the business," he said.

"The business started to come back. We went from a stock price at a low of US$23 to more than 10 times that today. When we started on the subscription journey (in 2012-13), our revenue from the creative business was about $2.5 billion. We have top line revenue of $6 billion now and it has grown dramatically on the creative side, and the document business has been following closely behind with very strong momentum."

At Best Buy, the Minnesota-based consumer electronics retailer, people thought its business was going to die given rising competition, especially online with the presence of Amazon. It announced a turnaround plan in November 2012, but not everyone was convinced it would work.

"We were supposed to die because people were coming to our stores, looking at the products, and buying the products online. By making our prices competitive and matching Amazon's prices, we took price off the table," recalled CEO Hubert Joly.

The first phase, called Renew Blue, "was a comprehensive strategy to involve all of our stakeholders starting with the customers, the employees, our venture partners, the shareholders and the communities in which we operated".

As a result, employee turnaround has fallen by 30% and staff are "proficient, engaged and helpful", he said.

"We partnered with key tech companies. It took almost $2 billion of cost down so we could invest in pricing and in customer experience."

After that came New Blue, which is about reinventing the company. "Our purpose is to enrich life with the help of technology," he said. "We make a difference in people's life by addressing people's needs whether it's entertainment, productivity, communication, food preparation, or security and health. We mobilised everybody and innovated in support of that.

"Data and digitisation of the company have been a key element of our transformation from Day 1," he said, adding that while Best Buy is seen as a store-based company, the customer journey goes across different touchpoints.

"We don't see ourselves as a brick-and-mortar retailer. We see ourselves as a company that obsesses with the customer and tries to serve the customers in a way that truly solves their unique problem. For example, if you are in our store, you can use the app to compare the features of different products you are looking at.

"When you are shopping, we tell you which products are available at what store so you don't have to waste your time. The stores are a wonderful asset from the customers' standpoint -- you can come, touch and experience and talk to somebody there. It has been very effective."

Another impressive business transformation has been seen at Chegg. Based in Santa Clara, California, it offers online textbook rentals (both in physical and digital formats), as well as homework help, online tutoring, scholarships and internship matching.

But before that, when Chegg went public about five years ago, Wall Street didn't like its non-digital business, viewing it as cash-intensive and built around costly textbooks.

"A competitor in Seattle launched a textbook renting business on the day we went public. So we had no choice but to transition," recalled Chegg CEO Dan Rosensweig, who is also an Adobe board member.

After its initial public offering (IPO) in 2015, the company had to transform completely again to survive. It believed it could thrive by becoming totally digital.

It has gone from being a product company renting textbooks to a digital company providing a range of learning services. Revenue has risen from about $300 million pre-IPO to $4.5 billion in the last couple of years.

"We built a company on top of the brand we have with college students," said Mr Rosensweig. "It started with listing what are the customers' pain points. We use technology to analyse and collect data -- we regularly monitor what the student does, when they do it.

"Now we can predict, for example, two weeks from now by school, which subject and which time of day they will need tutors. That is the benefit of being digital."

Mr Rosensweig notes that there are 60 million American students in high schools and 20 million in some form of higher education. Three-quarters of students go to state schools, very few go to private or boarding schools. Many struggle financially: 40% of courage students are working 30 hours a week so they cannot attend classes.

"We said we need to be on demand. We need to be peronalise-able, be able to adapt, be affordable, and we need to be available 24/7 in the cloud because they are going to do homework at two in the morning," he said.

Soldiers leaving for training in US

and has trained them on Covid-19 precautions before departure.