For the Lumpini Township Rangsit Khlong 1 project, LPN has set prices of less than a million baht a unit to target mass consumers.

Two tax measures were recently approved to resuscitate the housing sector, but they are unlikely to have much effect as mortgage rejections remain a major problem, say local developers.

"The prices of BoI-sponsored houses should be increased up to 2 million baht to keep current with rising costs," he said. "Condo unit sizes should also be decreased from 28 square metres, as land costs have risen."

Regulations for BoI-sponsored homes -- the promotions for which ended in 2014 but which developers winning promotions are still building -- call for single detached houses and townhouses to have a usable area of at least 70 sq m, with units priced no higher than 1.2 million baht. The price ceiling for condos was 1 million baht per unit.

To help boost the housing market and overall economy, Mr Prasert suggested a reduction of transfer and mortgage fees lasting for at least one year, with no pricing limits. 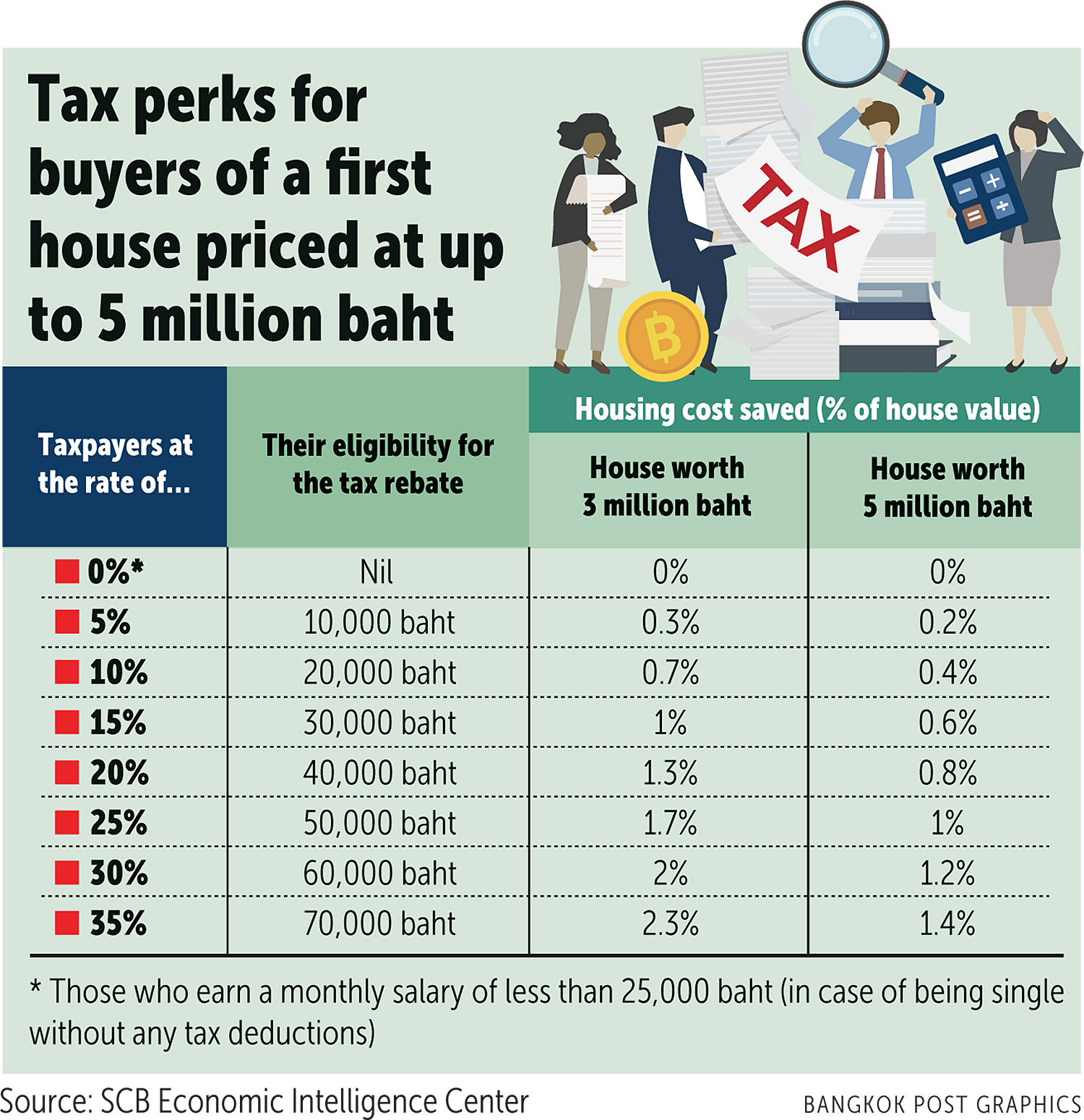 Last Tuesday, the cabinet approved additional tax perks, cutting both the housing transfer and mortgage fees to 0.01% for 12 months, from 2% and 1% respectively. The government hopes to revive buying after critics said the previous measure to offer tax deductions of up to 200,000 baht for buyers of homes and condos worth up to 5 million baht would have a minimal impact on the market.

The fee cuts will come into force after publication in the Royal Gazette and will run until May 31, 2020.

"Residential supply in Greater Bangkok for units priced lower than 1 million baht represents only 0.08% of the total housing market each year," Mr Prasert. "The impact [of the recent tax measures] will be minimal."

He said residences priced at less than 5 million baht are the majority of the market, making up 60-70% with a value of 300 billion baht. The total market value is about 520 billion baht a year.

The government is projected to lose 1.7 billion baht in revenue from the fee cuts, which will apply to low- and middle-income earners who purchase houses or condos of up to 1 million baht a unit.

There are 2.87 million families classed as low- and middle-income households that have yet to own their own home. 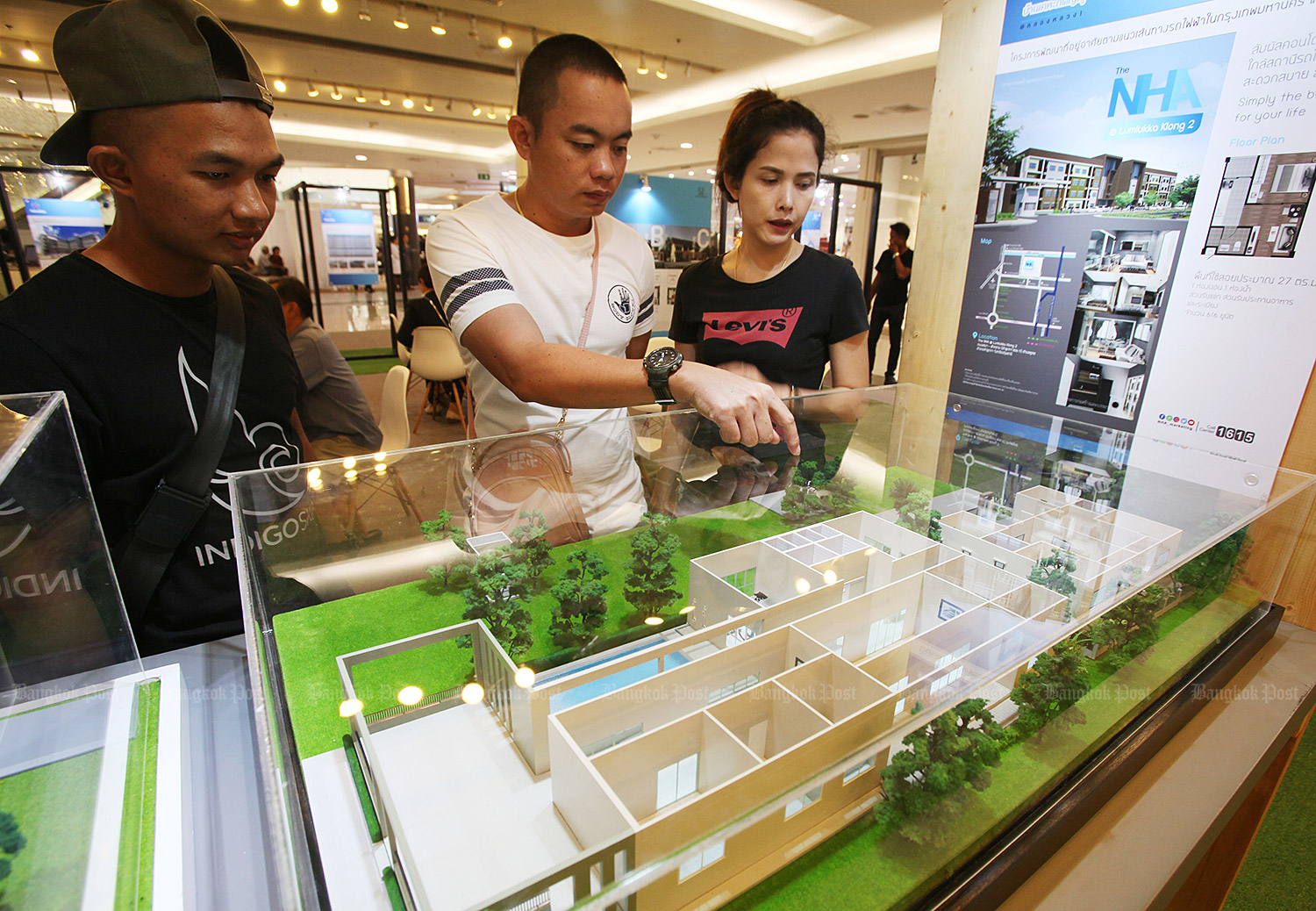 People browse housing models offered by the National Housing Authority. The NHA’s low-priced housing projects will get a boost from the recently approved tax perks. (Photo by Apichit Jinakul)

The measures should help stimulate the domestic property business, said Nathporn Chatusripitak, spokesman for Deputy Prime Minister Somkid Jatusripitak. There is a glut of houses and condos on the market worth less than 1 million baht, he said.

Issara Boonyoung, managing director of low-rise developer Kanda Property Co, said the cuts in transfer and mortgage fees may not have a strong impact on the property market or the overall economy.

"At a minimum, the measures can help boost condo sales priced lower than 1 million baht in Bangkok's outskirts, as well as townhouses in the provinces and government housing projects like Baan Pracha Rat and the National Housing Authority's Baan Ua-arthorn low-priced housing projects," he said.

According to SCB's Economic Intelligence Center (EIC), the measure for units priced lower than 5 million baht will help reduce the cost of a home purchase by an amount in line with the homebuyer's income tax base.

EIC senior analyst Nopphamas Houbjaruen said the effects from this measure in the housing market would be minimal because the measure only applies to first-time homebuyers.

She said those with a monthly salary of less than 25,000 baht who buy their first home will not see any benefit from the measure, as their salary level does not require them to pay income tax. 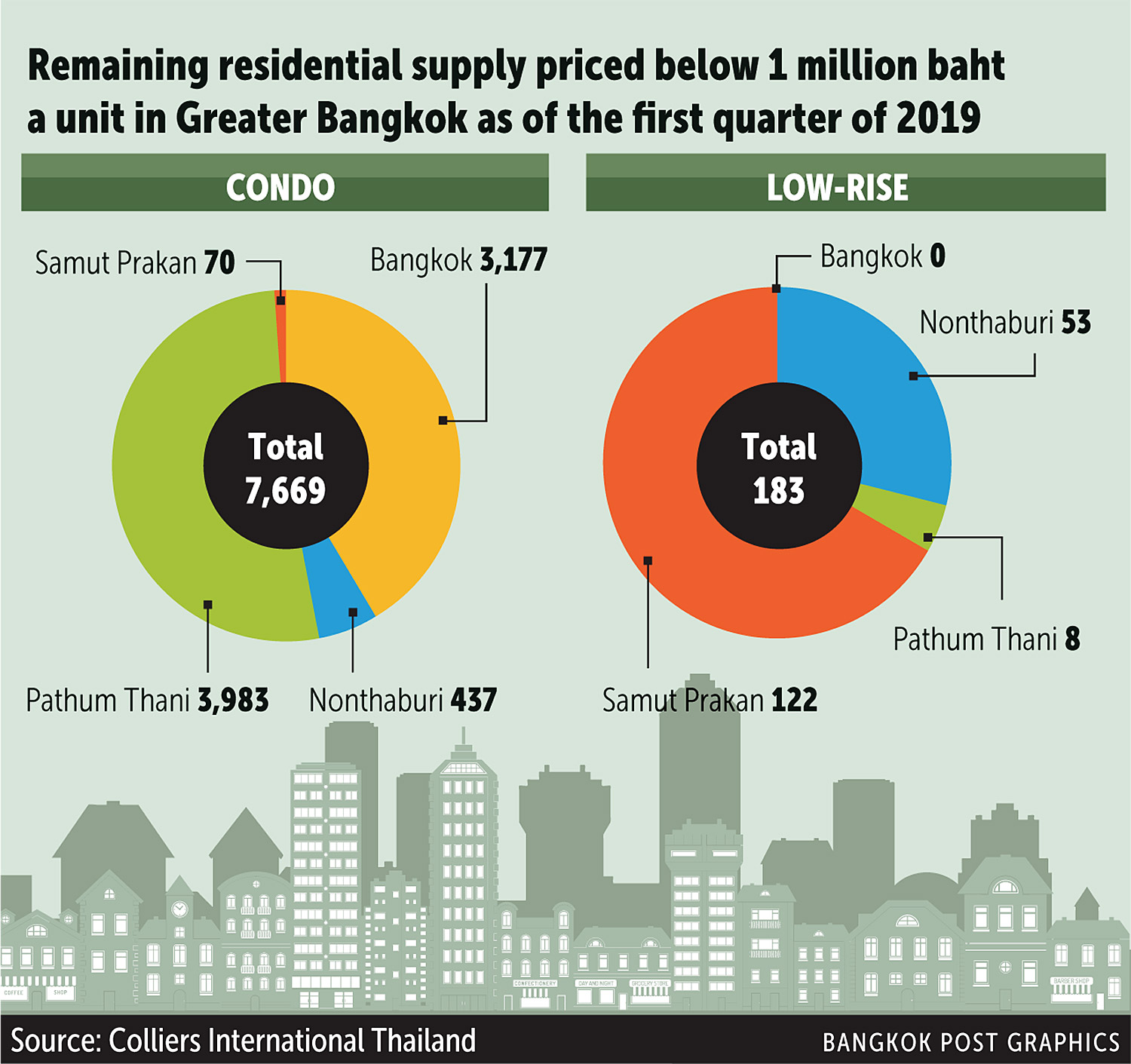 Mr Prasert, also a former president of the Thai Condominium Association, echoed the EIC, saying those who will benefit from the measure already own a house.

The EIC predicts a slight impact on the housing market from the stricter mortgage rules used by financial institutions after the Bank of Thailand applied new lending curbs from April 1, 2019.

Household debt remains at a high level, dampening borrowing capacity amid low growth in household income. As a result, the EIC is maintaining its earlier prediction of housing transfer value nationwide dropping 10% this year from 2018.

"These measures will ease the burden of buying a home," he said. "It can also facilitate a homebuyer's decision."

The fee reductions will help homebuyers save up to 19,800 baht in expenses, assuming two fees of 10,000 baht each reduced to only 100 baht, Mr Phattarachai said. The transfer fee of 2% is normally paid equally by buyers and sellers or developers.

He said the tax perks will also help reduce supply in the market as developers drain their inventory in this segment.

According to the Colliers research department, residential supply of units priced at less than 1 million baht in Greater Bangkok totalled 20,757 units as of the first quarter of 2019.

In the low-rise segment, Bangkok lacked supply because land costs were so high. The majority of low-rise units remaining unsold were in Samut Prakan, with 122 units, followed by Nonthaburi (53) and Pathum Thani (eight).

"Despite strong demand in the middle- to lower-priced segment, mortgage rejection is a major problem because of high debt," Mr Phattarachai said.

In the first two months this year, mortgage rejections in all pricing segments exceeded 50%. Figures were higher for low-priced units and tended to rise as the economy worsened.

"Though this measure may not help boost the overall market, other measures to help homebuyers who are unqualified to obtain mortgages are unwarranted, as they may become non-performing loans in the future," Mr Phattarachai said.