Regulatory support for a smart grid should be the next government's top priority for renewable energy policy, as finding funding sources for environmentally friendly projects is becoming easier in Thailand, says B.Grimm Power's president.

"I do not believe financing is our problem, as everyone wants to invest in renewables now," Preeyanart Soontornwata, president of the SET-listed private power producer and a subsidiary of Thailand's oldest industrial conglomerate, B.Grimm Group, told Bangkok Post.

The president was invited by the Asian Development Bank (ADB) to discuss "Renewable Energy Investing in Asia and the Pacific" at lender's 52nd annual meeting in Fiji last week. In December 2018, the ADB invested 5 billion baht in B.Grimm Power's maiden five- and seven-year green bonds, the first certified climate bonds to be issued in Thailand.

"The costs for grids and raw materials are also becoming cheaper, but the problem is not everyone can build a solar farm or a wind farm," Ms Preeyanart said. "They require a concession from the government, and Thailand has already limited these."

Thailand has the highest solar and wind power output in Asean, thanks to adder and feed-in tariff (FIT) policies that provide incentives for renewable energy projects. In June 2018, the Energy Ministry announced that private buildings and households which were "accepted" by the programme would be able to sell surplus solar power to the state's utilities. The condition is that the FIT was set at up to 2.44 baht per kilowatt-hour.

In 2013, the rooftop programme was launched with a total quota of 200 megawatts. The goal is to increase the country's total renewable energy power generation from 10% to 27% by 2037. To support the initiative, the Electricity Generating Authority of Thailand (Egat) in March said it would float 16 solar farms with a combined capacity of more than 2.7 gigawatts at nine of its hydroelectric dam reservoirs by 2037 -- what Egat claims will be the world's largest hybrid power scheme.

"For Thailand and its neighbours, finding financing is not a problem because of the concessions that we win from governments," Ms Preeyanart said. "In Vietnam, we had to use credit first because we had to construct too fast for the project to be financed, but once there were construction rigs, the banks were already waiting to provide the loans because there we have a concession."

Ms Preeyanart praised Thai regulators for maintaining a "good balance", because if the government did not limit incentives for solar there would be an avalanche of subsidies. This was the case in Spain and Germany, she said. 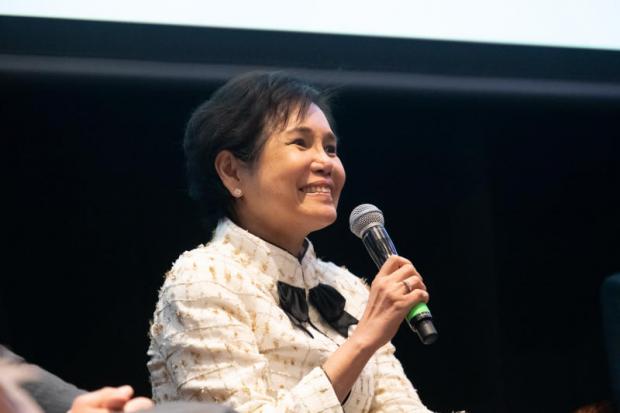 "That happened in Spain, and once the Spanish government pulled the plug on subsidies it could no longer afford, all the private companies collapsed and no one wants to invest there anymore," she said. "In Germany, the supports were set up too fast, to the point that everyone rushed towards it, and as a result, electricity prices have skyrocketed."

Ms Preeyanart said that for each megawatt of solar power, conventional energy such as gas, nuclear and coal should be built up to support it because the energy storage system for solar has yet to emerge here due to exorbitant costs.

"As long as this is the situation, moving too fast wouldn't be good for us and our electricity prices would also become expensive, which is why the government has imposed limits," she said. "The good news is that we can develop an energy storage system ourselves, but in my opinion, for Thailand, it has to be the smart grid."

A smart grid is an electric network that uses the Internet of Things to let devices communicate between suppliers and consumers, allowing energy producers to manage demand and protect the distribution network. Experts believe that this would save energy and reduce costs at the same time.

Ms Preeyanart said that while a smart grid could be developed in designated areas, building a system for the whole country is impossible. In these designated areas, there should be mixed energy production including renewables and conventional in combined cycle, such as solar rooftops and wind farms coupled with gas and coal.

"If we have combined-cycle power, energy storage will be easier to build and the government should support it because if there is a smart grid, the number of blowouts will drop because the main grid will have support," Ms Preeyanart said.

B.Grimm Power is developing a smart grid for Amata City in Chon Buri, while the industrial city was also selected by China and Japan to be the first-ever joint project between the two nations to build a pilot smart city.

"We still find it difficult to build a smart grid there with the five power plants that we have," Ms Preeyanart said. "Almost the entire industrial city is relying on us for electricity of around 750MW that we have, demand is at 800MW, which means that this is already a micro-grid that we can develop into a smart grid, but the regulations do not support us."

She suggested that consumers should be able to buy power directly from the source, and all the regulators should sit down together to streamline regulations and make it easier to build a smart grid.

"For example, if B.Grimm Power sells 90MW to Egat, Egat will in turn sell the power to the Provincial Electricity Authority, and then the PEA will sell it to the customers, that means that the consumers are not buying it directly from us," she said. "Because of this situation, once we try to develop a smart grid, there are just too many regulations to be dealt with once we follow both PEA and Egat regulations."

In an effort to avoid red tape, the company is bidding for a space in the Eastern Economic Corridor from the Royal Thai Navy to build a smart grid. Starting there from scratch would make it easier to develop an energy storage system, Ms Preeyanart said.

"We could become a pioneer in this area," she said.