The Bank of Thailand insists it has not manipulated the baht to gain an advantage in exports amid speculation Thailand could be added to the US's expanded watch list for currency manipulation.

The central bank regularly communicates with the US Treasury, telling it Thailand has not stepped into the foreign currency market to gain a trade advantage. Yet the country may still be included on the watch list simply because it has a trade surplus with the US, said Chantavarn Sucharitakul, assistant governor for corporate strategy and relations at the Bank of Thailand.

Thailand has talked with US representatives for three years ensure the US Treasury understands the need for emerging markets to manage currency fluctuation, she said.

"Thailand has not intervened with the currency to gain a trade advantage with the US. We're ready to have further discussions with the US," said Ms Chantavarn.

Commerce Ministry data reports Thailand shipped products worth US$14.5 billion to the US, while importing $8.8 billion, leaving a trade surplus of $5.7 billion for the first quarter. Southeast Asia's second largest economy had a trade surplus of $15.1 billion with the US last year.

Her comment came after Bloomberg reported the US Treasury examined its 12 largest trade partners and Switzerland, and that the expanded watch list could include Russia, Thailand, Indonesia, Vietnam, Ireland or Malaysia, all of which have large trade surpluses with the US.

Treasury issues a report twice annually on foreign currencies. In the latest report, expected this month, the number of countries whose currency practices the US examines for possible manipulation will rise to about 20 from 12, people familiar with the matter told Bloomberg. 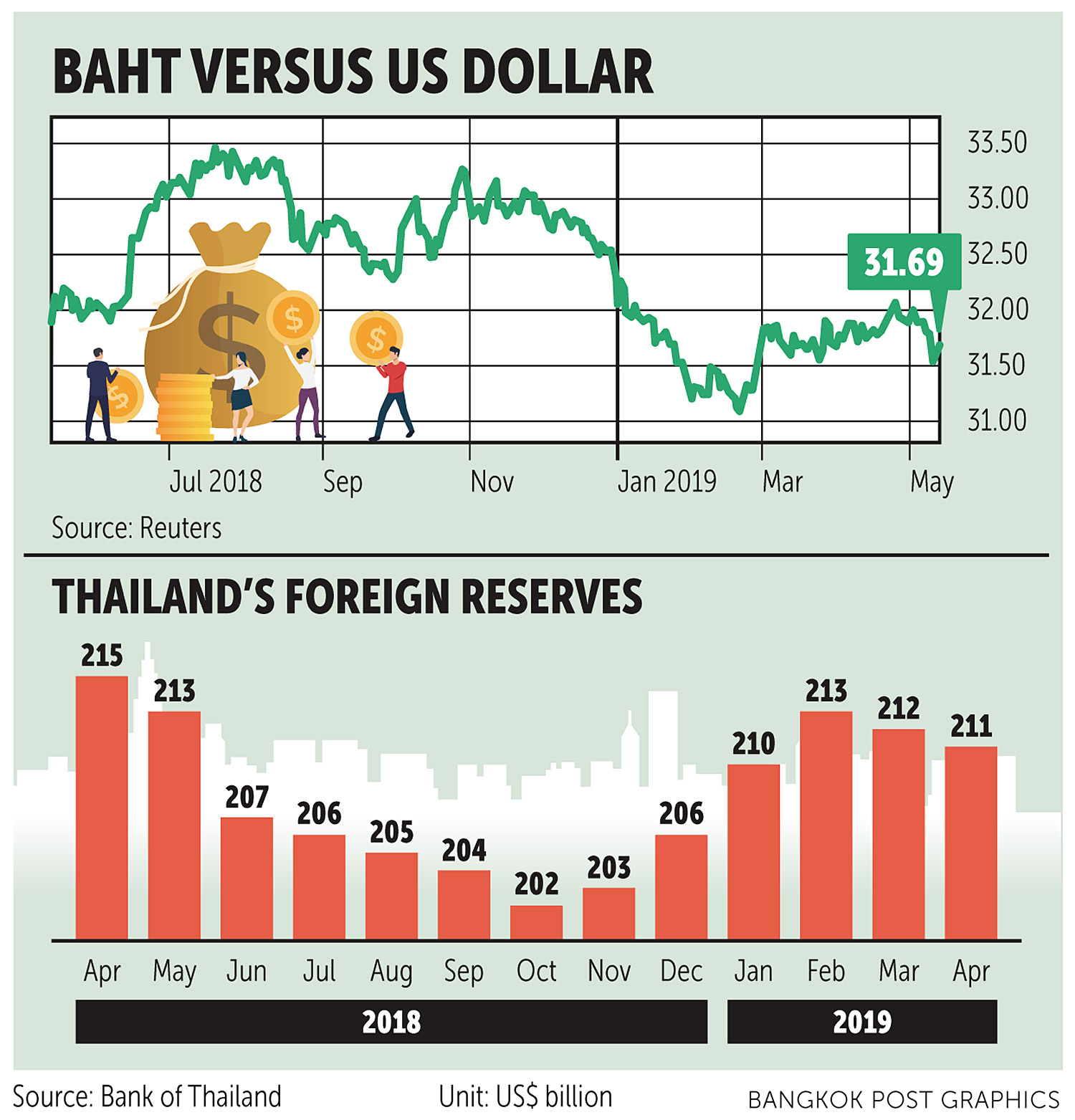 The number increased after the Treasury reduced one of the three criteria it uses to test for manipulations, the people said. That criterion is current account surplus, which captures the difference between the amount a country exports and imports. The criteria was reduced to a surplus of 2% of GDP from 3%.

Another two criteria are trading partners with a trade surplus of $20 billion or more with the US, and those with persistent one-sided intervention in the foreign exchange market.

The baht is the best performing currency in Asia, gaining 2.8% against the greenback so far this year.

Last year the baht was also the strongest currency in the region against the US dollar.

Thailand's foreign reserve, a rough proxy of the central bank's activities in the foreign exchange market, rose to $211 billion in April from $206 billion in December 2018, according to central bank data.