The telecom regulator has reduced the amount of bandwidth contained in each licence for the planned sale of three 700-megahertz licences from 15MHz to 10MHz, lowering the reserve price from 25-27 billion baht to 17.58 billion.

The National Broadcasting and Telecommunications Commission (NBTC) announced the change of terms and conditions yesterday in the final draft of the licence sale, saying the last-minute changes were due to restrictions set by the Section 44 order.

This means the total amount of spectrum for sale is 30MHz, down from 45MHz. The additional 15MHz will be sold through a traditional auction, expected by June next year.

"The change is because we [the NBTC] have to strictly comply with Section 44, invoked by the government as a part of an assistance package for digital TV businesses," said Takorn Tantasith, the NBTC secretary-general. But he did not clarify why the initially promised 45MHz was at odds with Section 44.

"Section 44 covered the range of only 30MHz of bandwidth for upload and download, not all 45MHz," he said.

However, some part of the 733-748MHz for upload and 788-803MHz range is already being used by microphone equipment nationwide. 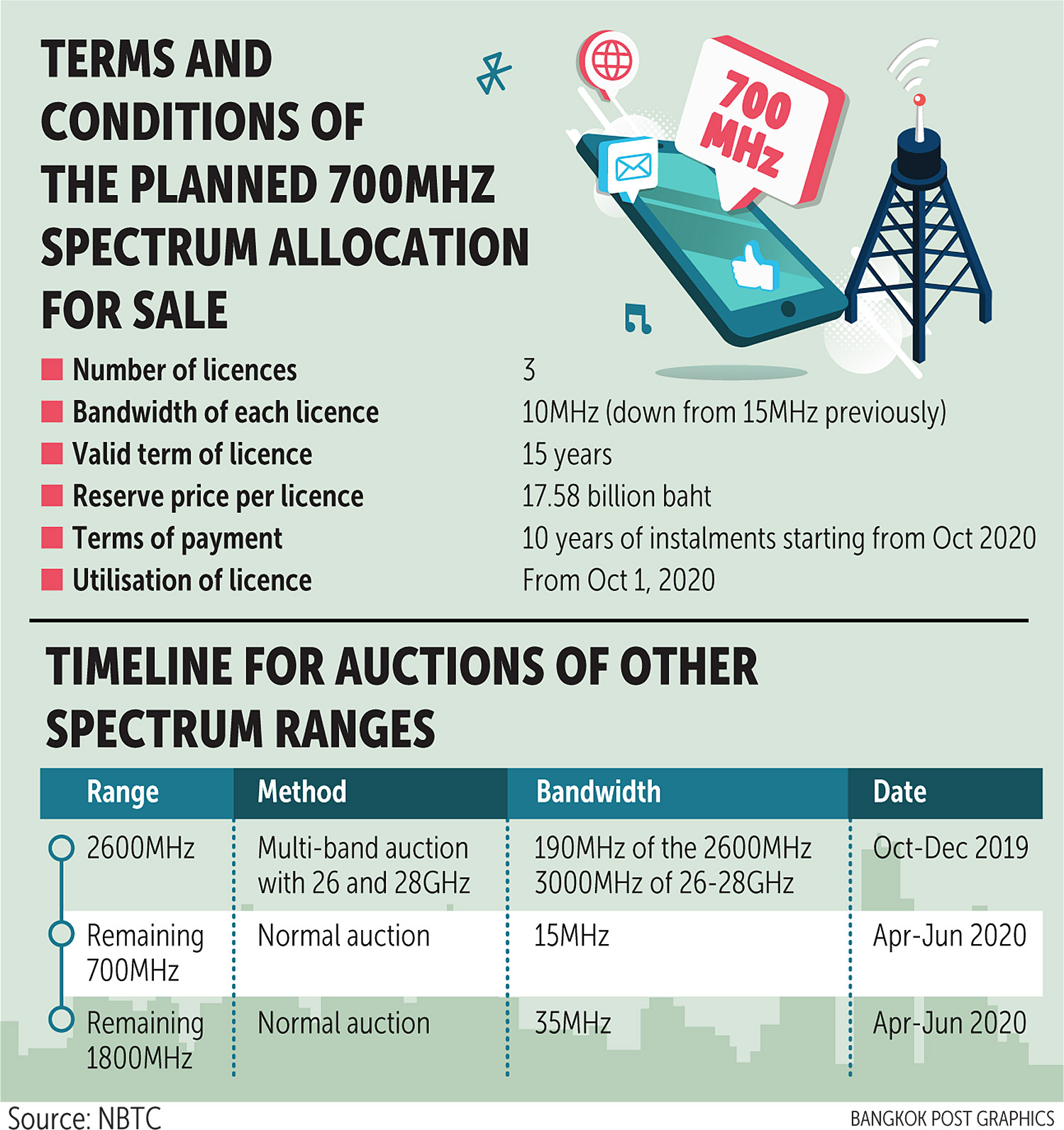 Mr Takorn said microphone usage on the 700MHz range will be transferred to lower ranges like 410MHz next year.

"The allocating of only 30MHz of bandwidth on the 700MHz is safe for both legal and technical factors," he said.

As part of the agreement to purchase licences on the 700MHz spectrum, the major operators will be allowed to extend their 900MHz licence payment terms for another five years.

The NBTC will hold a public hearing for the final draft on May 22.

Mr Takorn said the NBTC plans to auction a series of other spectrum ranges starting in the fourth quarter this year.

The 2600MHz range is now being used by state-owned broadcaster MCOT; however, MCOT is in the process of returning unused spectrum to the regulator in exchange for compensation.

Mr Takorn said the NBTC will auction the 2600MHz band together with 26- and 28GHz through what it calls a multi-band auction.

Last week, the three major mobile operators submitted proposals to reserve the right to buy the planned 700MHz licences in exchange for an extension to their 900MHz licence payments.

Somchai Lertsutiwong, chief executive of Advanced Info Service, said the company has yet to make a final decision on the 700MHz licence as it waits for advisers to come to a conclusion based on all financial factors.

Under-60s to get to book jabs soon

Individuals aged between 18-59 will be able to start booking their vaccination appointments at the end of the month, deputy government spokeswoman Rachada Dhnadirek said on Monday.

Many shopping centre operators have extended their relief measures to help enable tenants to continue with their businesses amid the unabated Covid-19 crisis.