Exports are expected to record their lowest growth in four years as a result of the EU-Vietnam Free Trade Agreement (EVFTA) and the renewed Sino-US trade war. 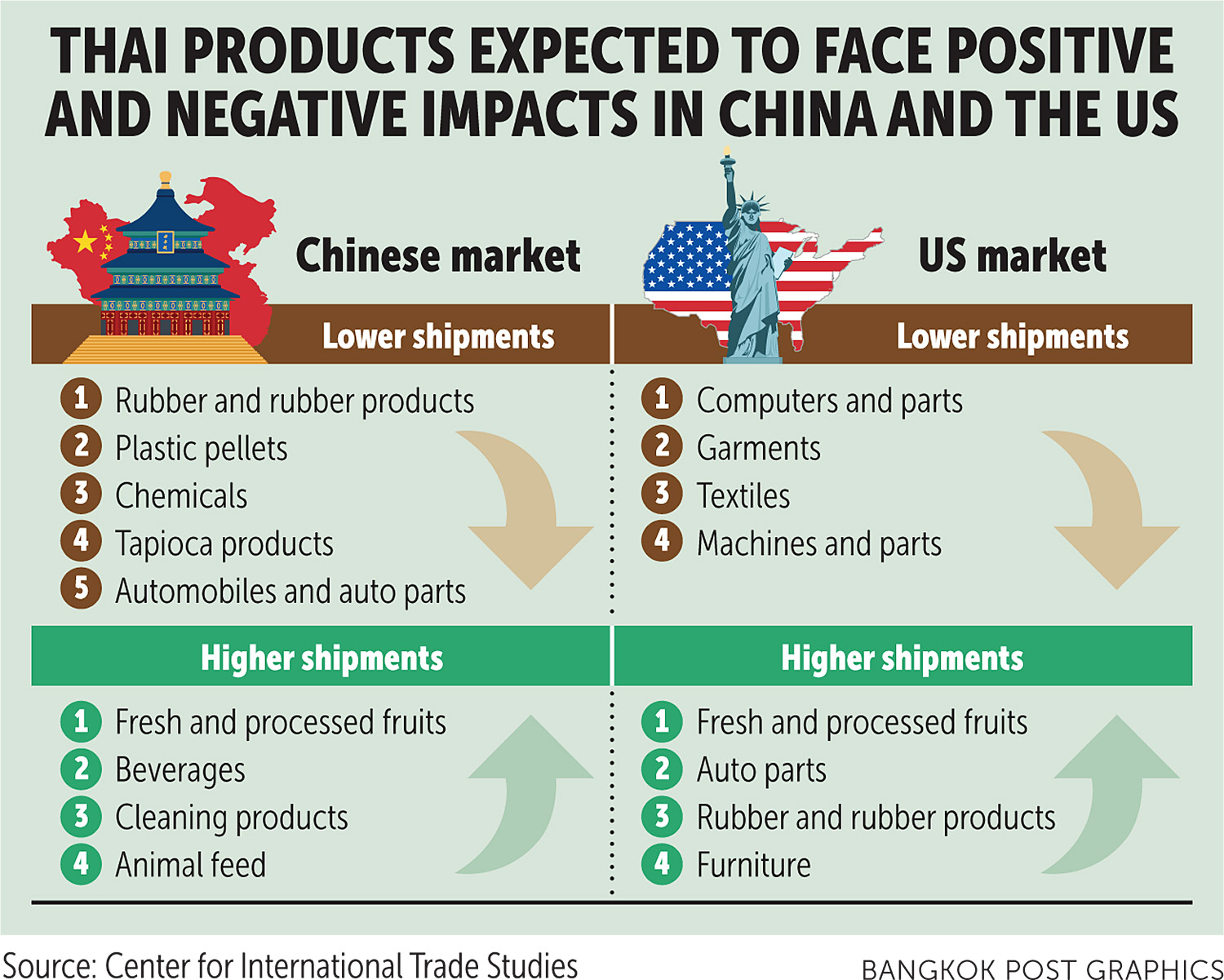 Aat Pisanwanich, director of the Center for International Trade Studies at the University of the Thai Chamber of Commerce, said the latest study puts export growth this year at 0.5-1%, compared with a 3% growth forecast made in February.

He cited the double whammy of the EVFTA, which becomes effective on June 1, and the deepening trade war between the US and China, with the former raising import tariffs on US$200 billion worth of Chinese exports from 10% to 25% last Friday. On Monday, Beijing said it would increase tariffs on roughly $60 billion worth of US goods in retaliation.

"We estimate that higher US tariffs on Chinese goods will trim Thailand's export income by 1.8% or $2.36 billion over the next six months of this year, while the EVFTA will slow Thailand's shipments by 0.3% or about $680 million in the same period," Mr Aat said.

Mr Aat said that in the worst-case scenario, with the US increasing tariffs on $300 billion worth of Chinese goods, Thailand's export growth could grow by 0.5% or even zero this year.

He proposed that Thailand speed up free trade talks with the EU and expand to new export markets, especially Brazil, Russia, India, China and South Africa. 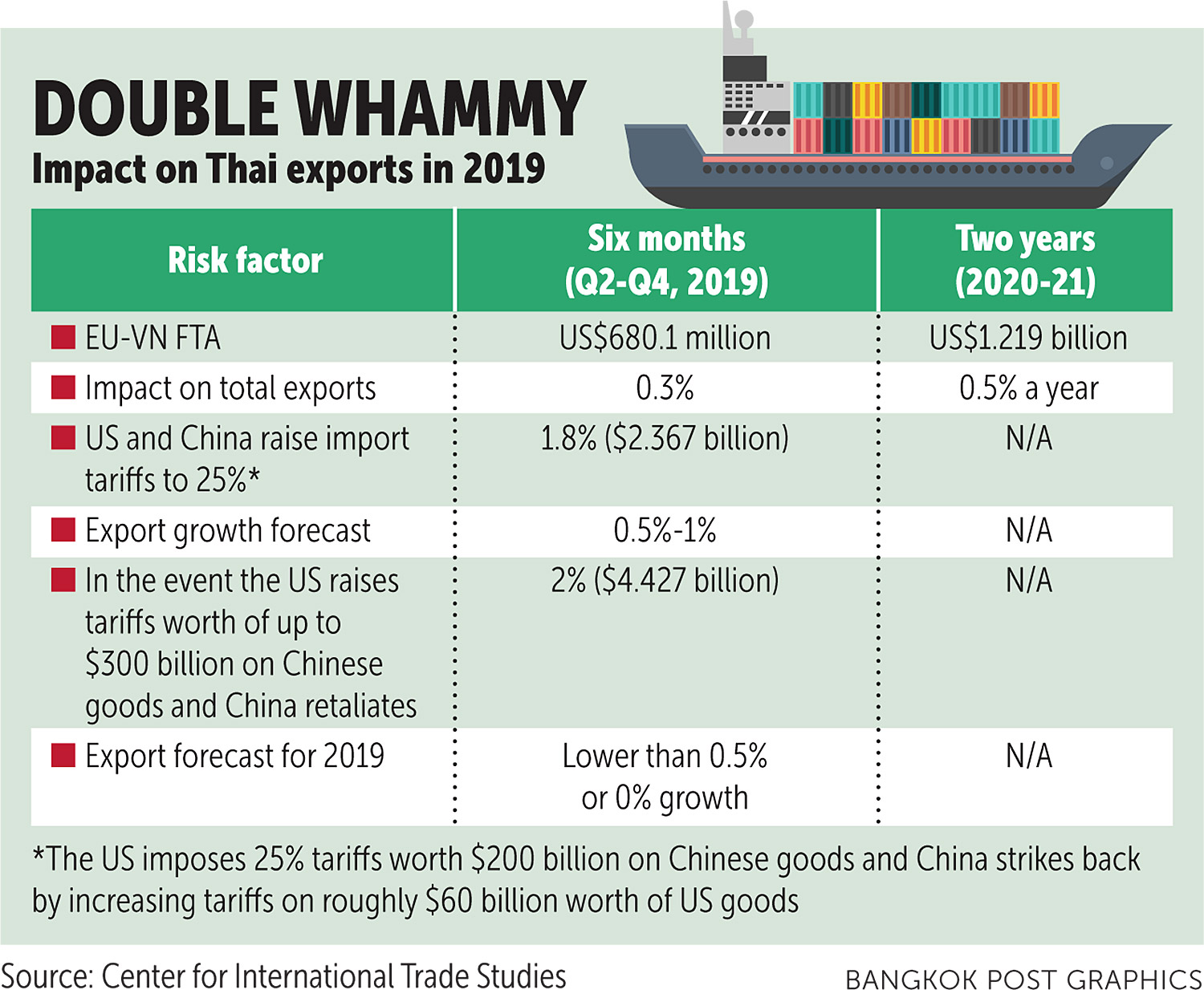 "The government should continue overseeing the agricultural sector, as trading of farm products such as soybeans, rubber and oil palm is expected to be harder hit by the escalating trade war," he said.

Pimchanok Vonkorpon, director-general of the Trade Policy and Strategy Office, said on Tuesday that the preliminary evaluation of higher import tariffs by both the US and China had found a group of Thai products which would be subject to a drop in exports, particularly electronic products and automobiles.

In a move to curb the impact, the Commerce Ministry is scheduled to call a joint meeting of commercial counsellors at overseas offices later this month to fine-tune export strategies.

In a related development, a source at the Finance Ministry said the impact from the fresh round of Sino-US tit-for-tats on Thailand's exports is expected to be minimal, noting that the country ships a small portion of products with imposed higher tariffs to the Chinese market.

Electronics is among Thailand's export sectors hurt by the US tariff rate hike on Chinese goods to 25% from 10%, the source said, adding that the effect will be limited given that electronic products account for a mere 13% of merchandise shipments to China.

Rubber and chemicals also face higher tariffs, but only 9.4% and 9.1%, respectively, is exported to China.

The global economic slowdown, particularly of Thailand's 15 major trade partners, has taken a toll on outbound shipments, the source said.

The Fiscal Policy Office (FPO) last month slashed its forecasts for export growth this year to 3.4% from 4.5% predicted in January and economic growth to 3.8% from 4%.

Whether the economy can expand at its growth potential of 4% largely hinges on exports, the source said, adding that there is no need for the government to do anything to rev up economic momentum if exports rebound in the latter half.

Siam Commercial Bank's Economic Intelligence Center said the US-China trade spat is expected to be short-lived, given that both countries will eventually resume talks because the tariff hikes affect both US consumers and Chinese producers.