Exports fell for a second straight month in April, weighed by the global economic slowdown, deepening trade tensions between the US and China, political uncertainty in the EU and downside risk in the Chinese financial markets.

The Commerce Ministry reported on Wednesday that Thailand's customs-cleared exports fell 2.6% year-on-year in April, fetching US$18.6 billion, after a 4.9% decline in March.

Exports in baht terms edged down 1.1% from April of last year to 583 billion baht.

"The contraction is largely influenced by the ongoing slowdown in the global economy and trade," said Pimchanok Vonkorpon, director-general of the Trade Policy and Strategy Office. "Fortunately, Thai exports have managed to expand in various markets such as the US, Vietnam, India, Cambodia, Malaysia, Hong Kong, Russia and the Commonwealth of Independent States."

According to the Commerce Ministry, exports of agricultural and agro-industrial products expanded for a second straight month, with growth of 3.9% to $3.58 billion. 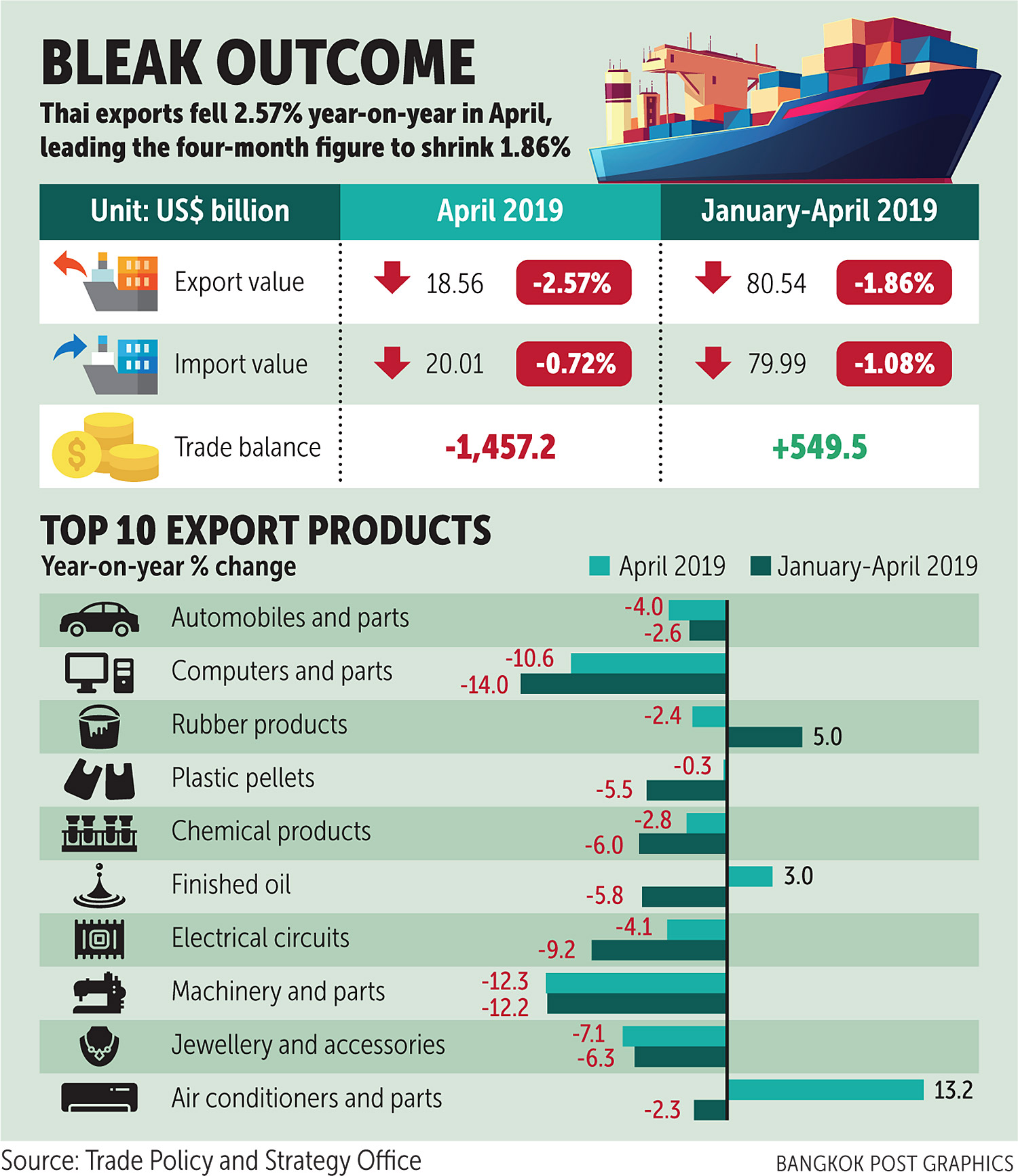 "Thailand's export trend aligns with global sentiment and that of other Asian countries," Ms Pimchanok said. "The export prospects of Thailand and several other countries remain murky due to the escalating trade war.

"We've also found that Thailand has lost the market for certain products such as automobiles. For instance, Australia has moved to import more electric vehicles from China and Germany and reduced imports of petrol-fuelled vehicles. Thailand thus needs to rev up finding partners to develop and manufacture electric vehicles in Thailand."

According to Ms Pimchanok, Prime Minister Prayut Chan-o-cha assigned the Commerce Ministry to evaluate the impact of the deepening trade war and devise aid measures as needed to offset harmful effects.

The private sector has asked the government to set up a war room chaired by the prime minister to manage the impact of the trade war.

Ms Pimchanok said her office found that higher import tariffs by the US on Chinese goods of 25%, up from 10%, would provide an opportunity for Thailand to export more to the US market to replace Chinese goods.

Greater shipments of electric appliances, electronics and chemicals to China are also anticipated.

In 2019, Thailand's exports have to brave a spate of challenging factors such as the US-China row, exchange rate volatility, trade policy uncertainty and new trade agreements that take effect this year, Ms Pimchanok said. These could affect Thailand's trade competitiveness.

Tim Leelahaphan, an economist at Standard Chartered Bank Thai, said the export contractions partly reflect the impact of the US-China trade war on industrial exports, as well as the stronger baht.

Agricultural exports in particular were hit, with rice orders weakening. Electronics exports slumped because they are part of the supply chain feeding into China.

Mr Tim noted a silver lining, as exports of some products continue to perform well as substitutes for China's tariff-snagged exports to the US. These include frozen and processed seafood products, fruits, vegetables and chicken.