Workers installing solar panels. Many companies are jumping into the solar market, as they expect both on-grid and off-grid solar power to take off. (Photo by Chanat Katanyu)

Thailand's solar power market is heating up as many listed companies plan massive investments in the sector.

Distribution channels for solar panels are also expanding to serve local demand for both on-grid and off-grid power generation.

For on-grid power capacity, the national power development plan (PDP) for 2018-37 has a revised target for its solar power portfolio over the next 20 years. The target is divided between the household rooftop scheme at 10,000 megawatts and a further 2,725MW for floating solar farms at nine dams operated by the state-run Electricity Generating Authority of Thailand (Egat).

Under the PDP, 100MW has been allotted for the household solar programme this year. Egat has begun development of floating solar panels for 46MW at Sirindhorn dam in Ubon Ratchathani.

Apart from the new solar power capacity of 12,725MW, off-grid independent power supply (IPS) firms will generate electricity without selling to the state grid, a segment that is seeing gradual expansion from businesses.

Many energy experts predict roughly 3,500MW in total solar power capacity at the end of 2019.

Most IPS projects in Thailand come in the form of solar rooftops, while other renewable power, including biomass and biogas, have combined power generation of 7,842MW as of September 2018, according to the Energy Regulatory Commission's report.

The on-grid solar model has been dropped from the latest PDP, which has shifted competition in the segment to the solar rooftop model.

Before the latest version of the PDP was approved by the cabinet in April, most listed power firms had abandoned the solar power generation sector, saying the business scale was not large enough to expand and invest further.

After the official announcement of the new version, many companies changed their minds.

Turn up the heat

New terms of reference for the auction will be issued in June, while the screening process will begin in October.

The project plans to commence operations by 2020. 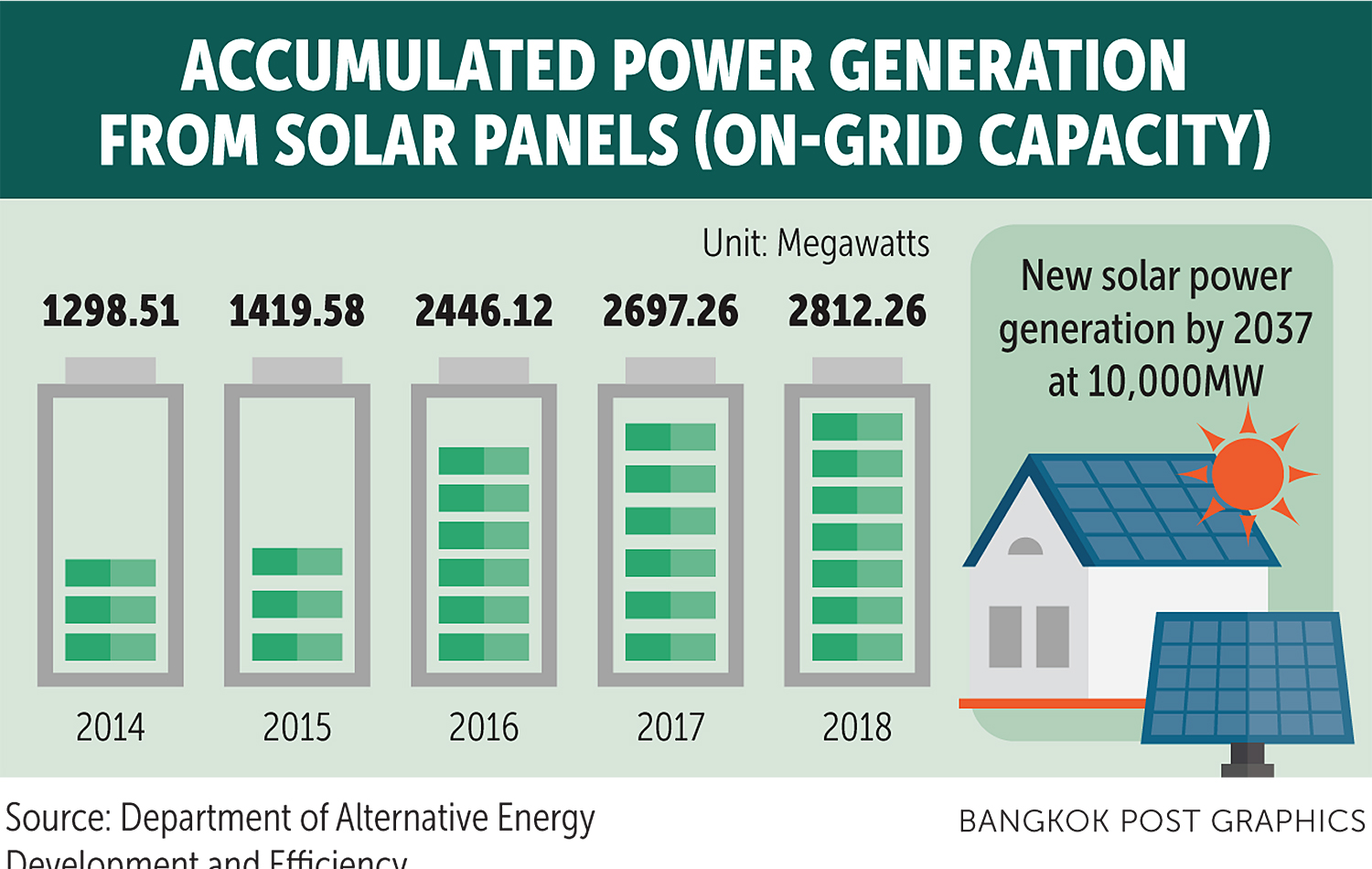 Pipat Viriyatranon, SPCG's vice-president for finance, said the company has also joined Home Product Center to set up a new distribution channel for solar panels in order to capture new demand for the household solar scheme.

He said solar farm projects in Thailand seem to be reaching peak saturation, so SPCG has to expand in Japan, where it has a strategic partner, Kyocera Corporation.

SPCG has committed to developing many solar farms in Japan: 30MW in Tottori, 480MW in Ukujima, 28.9MW in Kumamoto and 38MW in Kyoto.

Gunkul has seen a windfall from the household solar scheme under the new PDP.

"There have been roughly 100 buyers for GRoof solar panels since last year, when we generated revenue of 30 million baht," she said.

Gunkul has two financial partners, Siam Commercial Bank and Kasikornbank, to offer and facilitate home maintenance loans for buyers starting from 179,000 baht for 2.24 kilowatts and 2.33 million baht for 12kW.

Ms Sopacha said solar buyers can get a return on their investment in 8-10 years, while the solar products themselves can generate electricity for up to 25 years.

Gunkul plans to be a part of the solar rooftop community, under the government's plan to develop on-site power generation and decentralise the country's power system.

Gunkul is also a supplier and developer of solar rooftops for companies.

Earlier, the company secured 34 rooftop projects from Charoen Pokphand Foods for a total of 30MW generated by solar panels at factories nationwide.

There are many changes taking place in the country's solar power market.

Thongchai Sopon, managing director for SCG's roof business, said the launch of solar roofs is aimed at offsetting a bearish roof market in 2019, projected to slow by 2-3% from 20 billion baht in 2018. This is attributed to the shift of consumers in metropolitan areas preferring to live in high-rise condominiums rather than single detached houses and townhouses.

"Demand for solar rooftops, on the contrary, is rising as many property owners want to generate their own power," Mr Thongchai said.

SCG forecasts the total solar panel market to reach 40-50 billion baht in 2019, as there are many distribution channels for solar panels to make them more accessible and affordable.

A source from a solar installation service firm said the competition among rooftop providers is becoming fiercer, making a price war likely because roughly 400 solar trading firms are in the battlefield.

There are many learning materials on the internet that discuss the benefits of solar panels, making self-generation more accessible.

"Approachable materials means greater popularity of solar products, driven by household buyers," the source said. "Many distributors expected to cut their price tags by 30% in order to attract property owners."

The source said buyers should select and purchase solar panels cautiously. After-sale services should be a key consideration, as solar panels have life cycles of 20-40 years and need maintenance and repair.

Energy Minister Siri Jirapongphun said interested homeowners can enrol on a website to secure solar panel installation rights on a first-come, first-served basis. As of Friday, 70 households had secured a total of 393.11kW for installation.

The electricity sold to the PEA and the MEA is at a fixed rate of 1.68 baht per kilowatt-hour.

The Energy Ministry is encouraging solar panel distributors to provide inverters and electric meters for buyers.

Cambodia to mix vaccines as booster shots to fight Covid

PHNOM PENH: Cambodia will begin offering a booster shot against Covid-19, switching between the AstraZeneca and Chinese Covid-19 vaccines in an effort to fight the spread of the coronavirus in the neighbouring country.