SCENE OF THE BLAZE: Port officials inspect the fire-damaged containers on board the 'KMTC Hong Kong' vessel berthed at Laem Chabang Port in Chon Buri’s Sri Racha district. On the morning of May 25, a fire broke aboard the ship carrying containers loaded with chemicals. (Photo by Apichart Jinakul)

When containers aboard the KMTC Hongkong went up in flames last Saturday, officials at Laem Chabang Port were quick to say that the containers were loaded with “dolls and toys” and there were no chemical substances present.

The official explanation raised many eyebrows, given the health effects suffered by people in the vicinity of the incident.

The fire broke out on the early hours of May 25 on the vessel moored at Terminal A2 of the port. One container inside the ship exploded and caused others to catch fire, triggering an 18-hour firefighting operation to extinguish the blaze.

At least 228 people were rushed to hospital with burns, eye irritation and breathing difficulties.

Many others who sustained less serious injuries, bringing the total number of victims to 1,225, according to Laem Chabang port chief Yutthana Mokkhao.

It is estimated that fire caused 100 million baht worth of financial losses.

The public became particularly suspicious after authorities declared a 15-kilometre radius around the port a “red zone”. That’s a designation usually reserved for public health emergencies.

The truth finally emerged a few days later when it was revealed the containers were not stuffed with toys, but with potentially flammable calcium hypochlorite, an inorganic chemical compound widely used for water treatment.

The fact that Laem Chabang port authorities were unaware of this dangerous cargo has severely eroded public faith in safety standards at the facility.

Deputy Transport Minister Pailin Chuchottaworn, who inspected the fire site on Thursday afternoon, confirmed the finding that the chemical substance that exploded was calcium hypochlorite.

It is classified in Class 5 — oxidising substances and organic peroxides — of the nine Classes Of Hazardous Products used by the shipping industry.

These dangerous goods are subject to stringent transport regulations. No person may offer or accept these substances for transport unless they are properly classified, packaged, labelled and certificated.

The vessel carrying 676 containers had travelled from China and Mr Pailin told the media that the KMTC Hong Kong had failed to declare the chemical was among its cargo.

“The vessel appears to have flouted the regulations which require cargo ships to declare what kinds of goods they are carrying — whether or not they are to be offloaded or are en route elsewhere,” Mr Pailin said.

Port Authority of Thailand (PAT) director Kamolsak Promprayoon confirmed the ship failed to inform the authorities of the nature of the goods inside the 13 containers.

On the day the fire broke out, it was reported there were 676 containers on board upon the ship’s arrival at Laem Chabang Port. Of these, 463 were offloaded with the remaining containers, including the 13 containers that caught fire, destined for a port in Samut Prakan.

After the fire was contained and the investigation launched, more information emerged about the vessel, its cargo and a shipment plan that went drastically wrong.

KMTC Hongkong is a 16,731-tonne gross cargo carrier which sails under the South Korea flag. 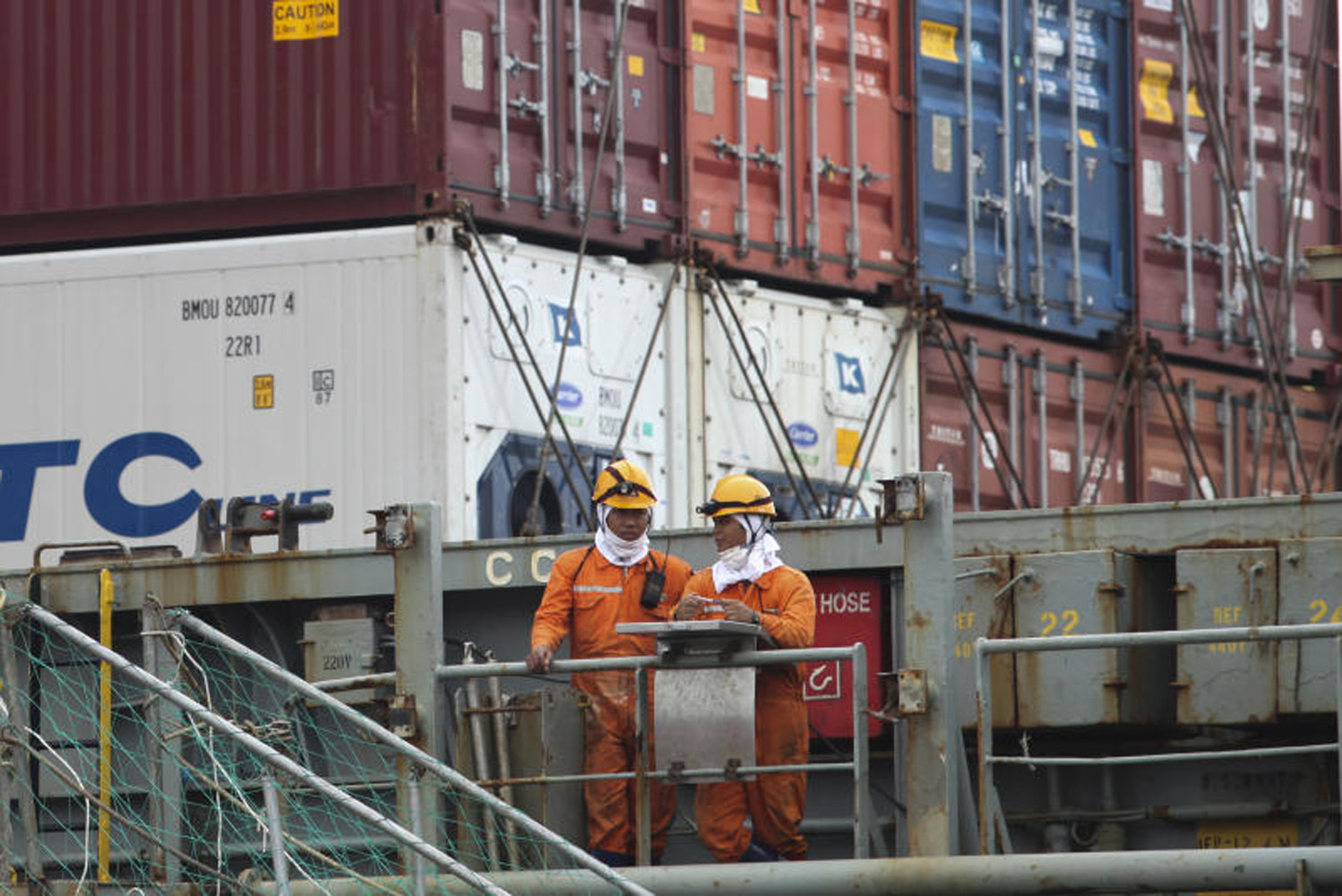 The freighter departed from South Korea and made stops at Shanghai and Hong Kong before berthing at Laem Chabang Port, according to information from Port Authority of Thailand (PAT) director Kamolsak Promprayoon.

In a document filed with Laem Chabang port authority, the cargo carrier failed to notify the port of the hazardous contents of the 13 containers that caught fire.

The investigation learned later that inside the 13 containers was 325 tonnes of calcium hypochlorite.

“We found these containers were not declared at the load port, and the vessel operator will demand compensation for damages caused from the cargo owners,” said Mr Apichart.

Some believe the owners of the containers may have deliberately not declared the goods to avoid shipment surcharges.

If that is the case, Mr Kamolsak told the Bangkok Post, the agency will go after those involved for failing to comply with the regulations.

He said the shipping vessel company must bear responsibility.

“By the book, it is the owner’s duty to declare their products. But it is the duty of the shipping company to verify the contents of containers aboard their vessels. It must know what the ship is carrying.”

However, even when the shipping companies and cargo owners properly declare the goods, questions remain as to whether the safety precautions and rules for handling dangerous goods are sufficient to prevent similar accidents from occurring.

If the shipping companies and container owners are violating the rules, critics say that the port authorities should be doing more checks of their own to ensure safety.

Currently, the handling of dangerous goods at Laem Chabang Port is carried out by a private firm under a revenue-sharing contract signed with the port authority.

There are rules and safety precautions to prevent fires or explosions and ensure safety while handling dangerous cargo.

In general, when the dangerous goods arrive at the port, there will be specialised staff to oversee that the cargo is offloaded and transferred to designated warehouses safely.

In the case of radioactive materials like Cobalt-60, the PAT has imposed strict cargo offloading rules.

For instance, the offloading area must be secured with clear warning signs to keep unauthorised people away.

The shipment and transfer of Cobalt-60 must be supervised by highway police and officials from the Office of Atom for Peace (OAP), the state agency responsible for nuclear substances.

For more dangerous goods, the goods must be relocated away from the port immediately.

The PAT bans the opening or storing containers of highly hazardous goods on the pier or in offload areas.

If the goods cannot be moved out of the port, they must be moved to a separate depot for hazardous goods.

Dangerous waste must be clearly labelled and must be stored in containers only.

Carrier operators or owners who fail to declare dangerous goods or improperly declare goods are subject to fines of 50,000 baht per vessel.

Following the container fire on KMTC Hongkong, Thanabodi Thoopthianrat, assistant director at Laem Chabang port, said all vessels mooring at the port will be required to declare the manifest sheet, which has details of the goods inside all containers on their vessels.