Major Thailand-based airlines have set modest goals for themselves by looking closer to home for a risk-limiting expansion, as the International Air Transport Association (IATA) announced a downgrade of its 2019 outlook for the global air transport industry and a decline on 2018 net post-tax profits.

At the 75th IATA Annual General Meeting and World Air Transport Summit in Seoul at the weekend, Alexandre de Juniac, IATA's director-general and CEO said the outlook for the global air transport industry is downgraded to a US$28 billion profit (from $35.5 billion forecast in December 2018). That is also a decline on 2018 net post-tax profits which IATA estimates at $30 billion.

Mr de Juniac said the business environment for airlines has deteriorated with rising fuel prices and a substantial weakening of world trade.

"This year will be the tenth consecutive year in the black for the airline industry. But margins are being squeezed by rising costs right across the board -- including labour, fuel, and infrastructure," he said. 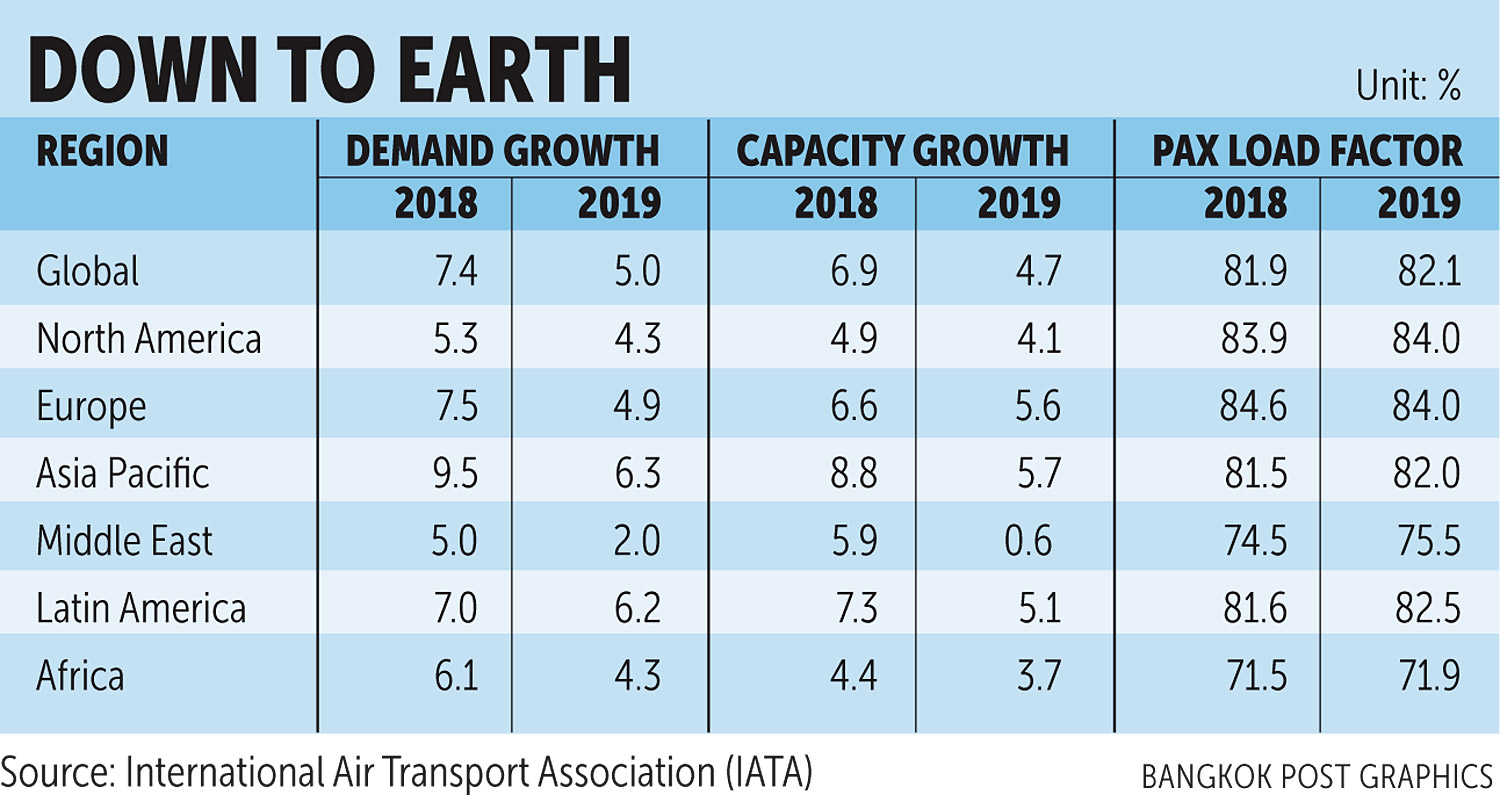 "Stiff competition among airlines keeps yields from rising. Weakening of global trade is likely to continue as the US-China trade war intensifies," the IATA CEO said.

This year, the return on invested capital earned from airlines is expected to be 7.4% (down from 7.9% in 2018). While this still exceeds the average cost of capital, estimated at 7.3%, the buffer is extremely thin.

However, the decline is bottoming out, Mr de Juniac said. A downturn in the trading environment no longer plunges the industry into a deep crisis. But he warned that under the current circumstances, the great achievement of the industry -- creating value for investors with normal levels of profitability -- is at risk.

Total passenger numbers are expected to rise this year to 4.6 billion (up from 4.4 billion in 2018). Airlines have responded to the slower growth environment by trimming capacity expansion to 4.7%.

The region is showing diverse performance. Accounting for about 40% of global air cargo traffic, the region is the most exposed to weakness in world trade, and that, combined with higher fuel costs, is squeezing the regions' profits.

Meanwhile, Thai carriers have put up a fight to weather the economic storms from a tough aviation environment. However, conditions are not conducive to ambitious growth projects, so expansion will be kept at a manageable range.

Santisuk Klongchaiya, chief executive officer of Thai AirAsia, told the Bangkok Post that since the beginning of the year, the carrier has seen a silver lining as it recovers from ameliorated global fuel prices and a slowdown in Chinese tourist arrivals from last year.

Buoyed by the strong tourism industry overall, which was fostered by an extended Visa On Arrival fee waiver by the government for citizens of 20 countries and one territory, Thai AirAsia reckoned it is well-positioned to achieve both growth and service targets.

However, Mr Santisuk noted that mitigating "unprecedented risks" would help insulate the airline from drag. One of the critical risks is over-dependence on a single tourist market as the main source of revenue.

"Thai AirAsia consistently explores new growth opportunities in the CLMV (Cambodia, Lao, Myanmar and Vietnam) as well as India to reinforce its strength and to maintain its leadership in Thailand's low-cost aviation industry," Mr Santisuk said.

"Overall, there are more opportunities than difficulties for the Thai aviation industry, given the fast recovery of inbound tourism and lowering fuel prices," he added. "Thai AirAsia should come out strong this year."

However, Bangkok Airways is less upbeat. "We have slowed plans to open new routes over the rest of the year," says its chief executive and president, Puttipong Prasarttong-Osoth.

He said air travel in Thailand has been relatively sluggish, noting a slowdown in inbound flights to Thailand in the first quarter this year. But the situation seems to have settled after the Easter holiday, when the number of Bangkok Airways passengers increased by 6% from the month before.

He has made a point of increasing frequency on existing routes, especially to Vietnam's Phu Quoc Island, which is preferred by millennials for its beaches and fish sauce factory tours.

Experts said airlines that are capable of accurately assessing risk factors and able to be "fluid" in modifying their contingency plans to reduce the chances of crisis are naturally more resilient and competitive.

They noted airlines in Thailand and many Asian countries face similar volatilities, including limited or restricted capabilities to operate and expand. Some issues are within their powers to address, which is completely different in terms of "toughness" from, for example, the carriers in Africa where high taxes push up operating costs and the funds from overseas which provide airlines their financial lifeline were blocked.