Instant noodles are the ultimate convenience food, but makers these days need to persuade more demanding diners that they can be healthy too

A staple for millions of Asian workers, students and many others living abroad, instant noodles are the region's favourite comfort food. In the cupboards of shacks and mansions alike, you'll find cups and pouches ready to be mixed with water and served. And competition in the market is fierce.

Asian countries take pride in their local noodles. In Thailand, Mama is an all-purpose word for noodles no matter what the brand, so powerful is the market position of Thai President Foods. Some other countries' favourites have made their way abroad, such as Demae Iccho from Japan-based Nissin Foods, which is popular in Hong Kong, along with Myojo and Cup Noodles from the same company.

South Korea boasts the internationally renowned Nongshim and Samyang Foods, and stir-fried Mi Goreng from Indomie in Indonesia sells briskly in Australia. Many more choices are available on the shelves including Maggi by Nestlé and Koka from Singapore.

It has been 60 years since Momofuku Ando, the Taiwanese founder of Nissin, sold his first instant noodles -- chicken-flavoured ramen -- in 1958. Last year the food was sold 103.6 billion servings, or roughly 280 million per day. Few other global foods can match that scale.

According to the World Instant Noodles Association (WINA), 10 of the top 15 markets for instant noodles are in Asia (see table). South Korea leads in per capita consumption at 74.6 servings per year, followed by Vietnam and Nepal.

Despite the huge popularity of instant noodles, eating them carries with it an element of health concern or even guilt for some people. More than one mother has told her noodle-slurping children, "Stop eating that garbage, it's bad for you". The reason is that most instant noodles contain monosodium glutamate, which has long been controversial.

MSG is basically a stable salt formed from glutamic acid. Discovered in 1908 by University of Tokyo chemistry professor Kikunae Ikeda, it delivers a taste that he described as umami, loosely translated as "savoury". It is mostly associated with a "meaty" flavour that Ikeda said could complement the four basic tastes of sweet, salty, sour and bitter. 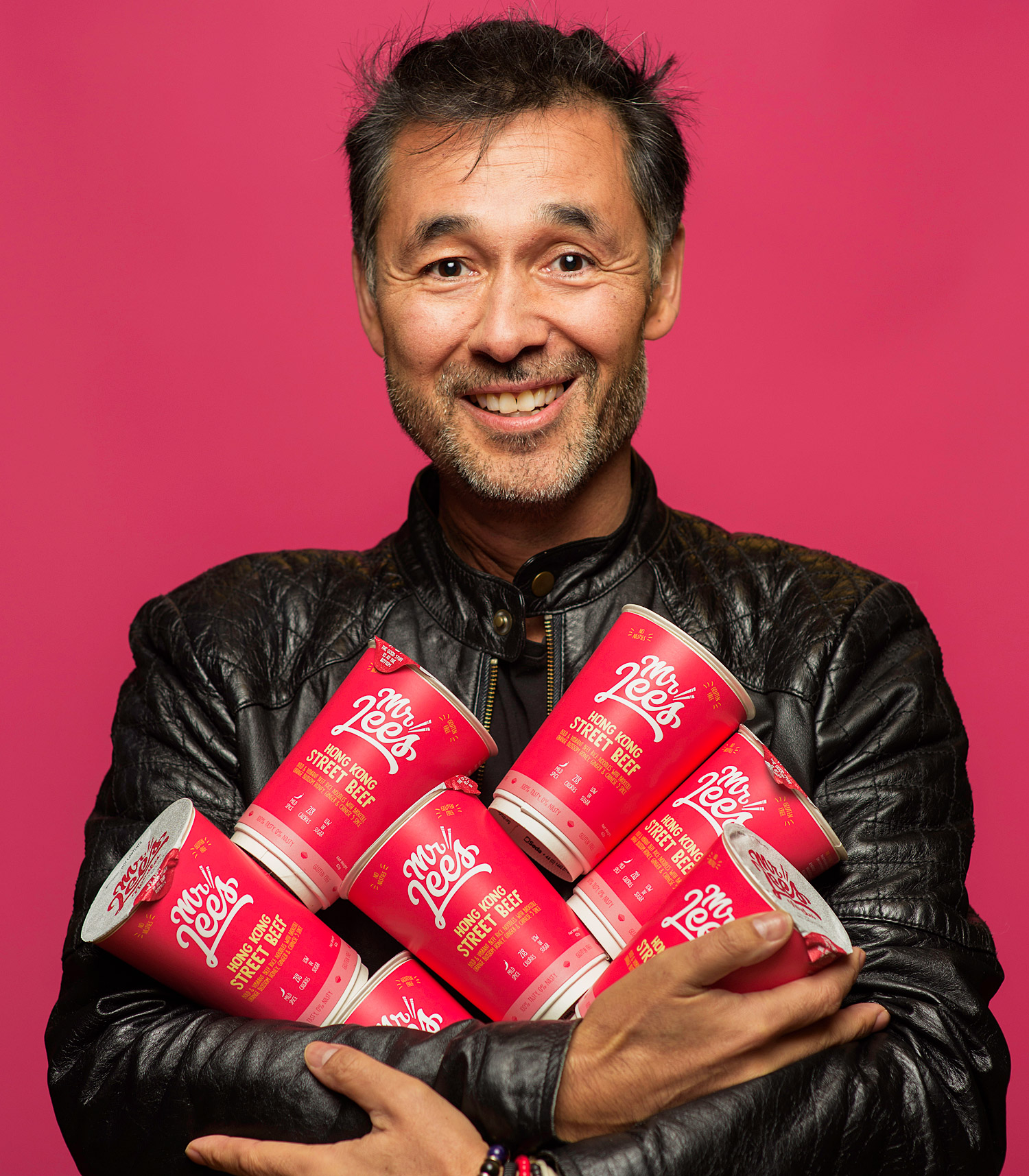 "We’ve worked hard to make sure each and every cup is authentic in taste and texture to the cuisine you’d expect from any top noodle bar" - DAMIEN LEE, Mr Lee’s Pure Foods

But as MSG started to become more widely used, it started to attract criticism. Its notoriety grew after the authoritative New England Journal of Medicine published a letter in 1968 from Dr Ho Man Kwok suggesting that MSG was the main cause of "Chinese Restaurant Syndrome". Every time he ate at a Chinese restaurant in the US, the recent Chinese immigrant said, he felt a strange numbness at the back of his neck that then spread to his arms and back, coupled with general weakness and heart palpitations.

A year later, American psychiatrist John Olney reported that injecting large doses of MSG in newborn mice led to the development of patches of dead tissue in its brain. But 19 other studies on monkeys failed to replicate the symptoms that Dr Olney believed to have been caused by MSG in both mice and monkeys including stunting, obesity and sterility in their adulthood.

Countless experiments have since taken place, including human trials, and most of the hysteria surrounding the substance has been debunked. The US Food and Drug Administration (FDA) in 1995 commissioned a study by an expert panel of biologists, who concluded that MSG is safe for most humans except those with serious asthma difficulties.

Some reactions were reported when people were given three grammes or more of MSG in water, without food. That's a highly unlikely way to consume it, given that most people would get only around 0.55 grammes per day of MSC in food.

"Although many people identify themselves as sensitive to MSG, in studies with such individuals given MSG or a placebo, scientists have not been able to consistently trigger reactions," the FDA says on its website.

Regardless of the facts, public suspicions about MSG persist, and as consumers worldwide grow more health-conscious, the makers of foods that use the product are thinking twice about how they can adapt.

Mintel, a global market research company, has identified three trends that "will lead the momentum of global food and drink innovation in 2019 and beyond". First is "evergreen consumption", a circular view of sustainability that spans the entire product life cycle and will require action from suppliers to consumers.

The other two are a "through the ages" trend, with food and drink makers looking to offer more solutions for healthy ageing, and "elevated convenience", which seeks to meet the premium expectations of consumers in the on-demand age with upgraded versions of convenient staples.

Achieving a "truly circular food and drink economy" will require efforts that include not only improving access to recycling, but also creating products with ingredients that are grown in accordance with regenerative agriculture practices, according to Jenny Zegler, associate director of Mintel Food & Drink.

"Expect to also see food and drink manufacturers look to the beauty and personal-care industry for inspiration for healthy ageing product development. More food and drink will address longevity-related health concerns," she added.

So where does all this leave instant noodles? Consumers who are no longer willing to compromise on health and quality for the sake of convenience have already pushed most instant noodle brands around the world to offer the non-MSG version or healthier options.

Mama notes on its labels that its products also contain iron and vitamin A. Full breakdowns of ingredients (palm oil makes up about 10% of volume in many products) can be found on its website. Nissin Cup Noodles is now advertising that its original instant ramen in a cup has reduced the amount of sodium with no added "MSG or artificial flavours". 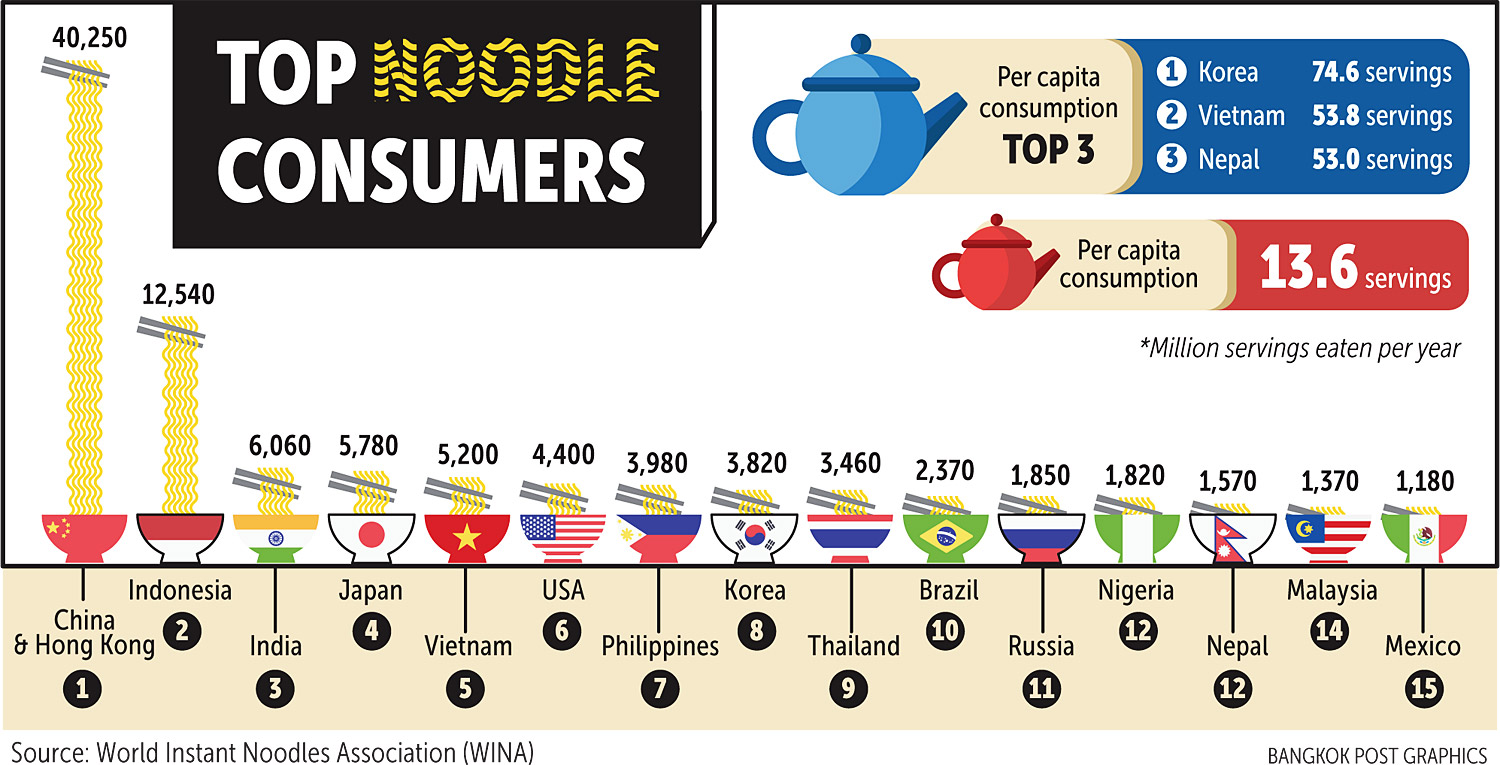 The new approach seem to be working. A business viewed in China, its biggest market, as a sunset industry and seen as unhealthy for many years is now making a turnaround.

According to WINA, four out of the five top consuming countries for instant noodles recorded a year-on-year growth last year, with Indonesia the only one to see a decline.

Mintel also noted that the instant noodle industry in China saw improved growth rates in 2018. Daisy Li, a Mintel Food & Drink associate director specialising in the China market, said this indicated "an opportunity for instant noodles to make a revival in the country".

She provided an example of Master Kong, a Chinese brand that partnered with Aerospace Industry Partners of China in 2017 to reinforce a new image with healthier ingredients and innovative processing methods.

"This move helped the company establish a reputation of producing safe, nutritious and high-quality products," she wrote in a blog post.

Instant noodle brands are also looking to shed their reputation as junk food and move upmarket in some cases, she said. The Mintel Global New Products Database notes that more product launches these days are "more focused on healthy and clean label formulations, all in a bid to introduce premiumisation to the category".

Examples include Master Kong's stewed beef instant noodles, which offer separate packaging for the noodles and the meat, using imported real beef, providing consumers with a non-fried and nutritious option. The other is Cereal Ways' vegetarian instant noodles, which include four different types of vegetables to appeal to consumers seeking a non-meat option.

Another contender in the healthy-noodle space is UK-based Mr Lee's Pure Foods, which is looking to expand to Asia in the near future.

"The idea to create a healthier instant noodle came from my love of instant noodle products and the understanding that most, if not all of them, were full of nasties," company founder Damien Lee told Asia Focus.

"After recovering from late stage 4 cancer, I knew I wanted to bring the world a new kind of instant noodle that would be guilt-free and good for you, full of the finest freeze-dried ingredients that would keep our noodles high in nutrition, entirely gluten-free, and with absolutely no nasties," he added. Mr Lee's Pure Foods now has six healthful noodles.

Mr Lee believes his company's products suit the needs of a health-conscious clientele by providing options that do not compromise on nutritional and physical integrity. But at the same time they do not sacrifice taste or convenience.

"We've worked hard to make sure each and every cup is authentic in taste and texture to the cuisine you'd expect from any top noodle bar," he said.

Currently the company is selling its products only in the UK, and on some flights of Australia's Jetstar Airways. Mr Lee sees the latter as an opportunity to fill a gap in airline meals, many of which feature "cold snacks poor in nutrition". The Jetstar venture could also help the firm build a profile in Asia.

"Flying across Asia Pacific with Jetstar, we expect to gain more traction across the Asian region, partnering with additional Asia Pacific carriers, and launching our products into retailers, independents, and with our high-tech, 24/7 Noodle Kiosk vending machines," he said. 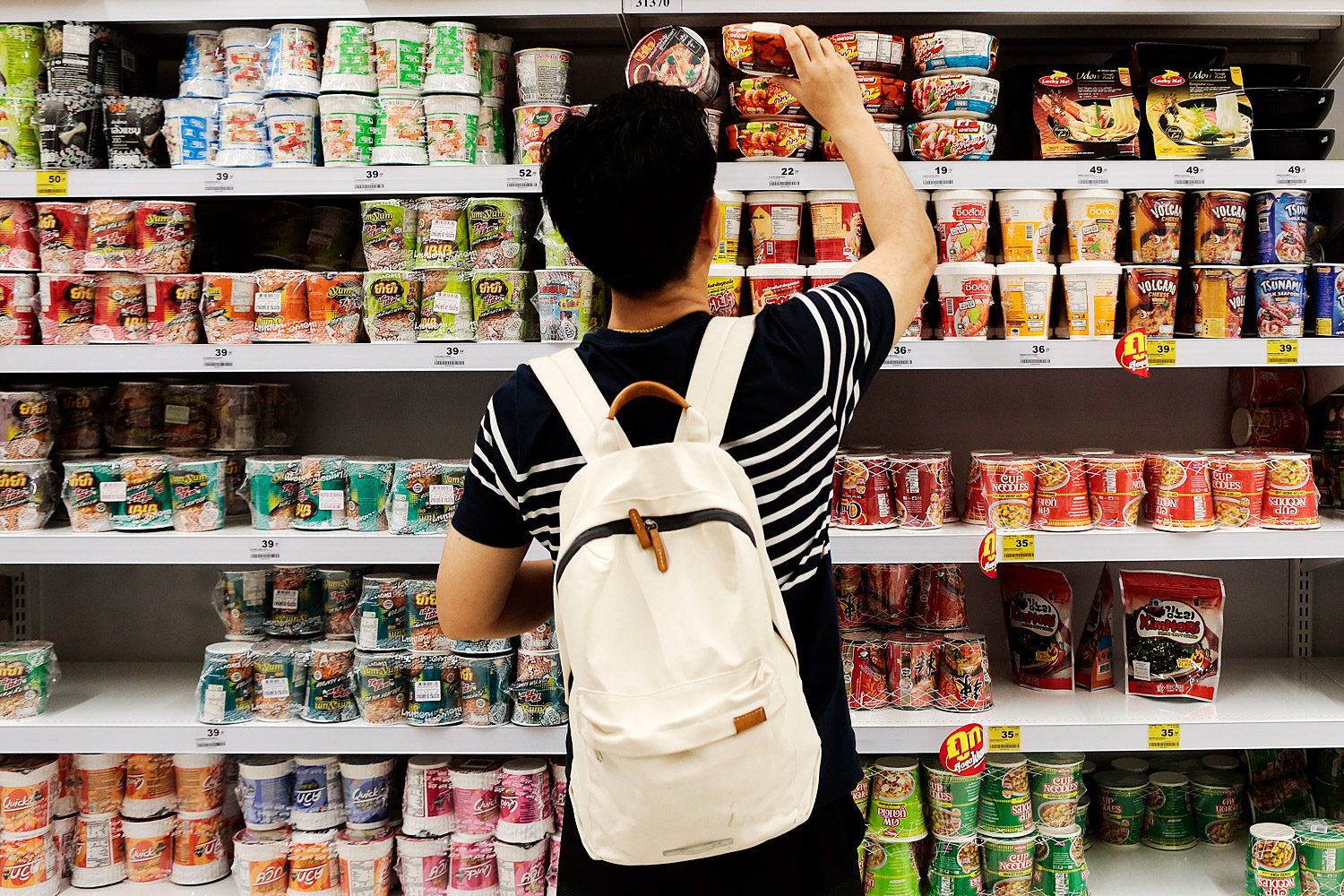 "My main ambition is to go global and sell back to Asia, a proven market for our sector, such as Thailand which is serving 3 billion instant noodles per year."

Given the high level of competition, Mr Lee intends to stress his products' very low salt, sugar, fat and calorie count with "absolutely" no added MSGs, additives, colours or flavouring.

The product range is entirely gluten-free with two vegan flavours, while using whole pieces of premium freeze-dried ingredients that are "as convenient and quick to prepare as all the other brands".

Mr Lee says his company's market research has shown that consumers are happy to pay a higher price for a healthier option, a reflection of the company's premium status and "trust in European brands".

"With the knowledge that consumers are more educated about what goes inside their foods, we hope that they will continue to look for more high-quality, healthier alternatives such as ourselves, seeking real, honest foods over the nasties," he said.

"We hope to use these awards to kick-start our push into the Asian region and make an impact on people's diets with accessibility for healthful meals across the market," he said.

With Thai consumers already warming up to the idea of Korean instant noodles that can cost more than 40 baht per package, compared with 6 baht for Mama, healthier instant noodles may well have a promising future.