The Commerce Ministry is calling on retailers to mark up prices of cooking palm oil to reflect higher costs, in part to help boost domestic oil palm prices. 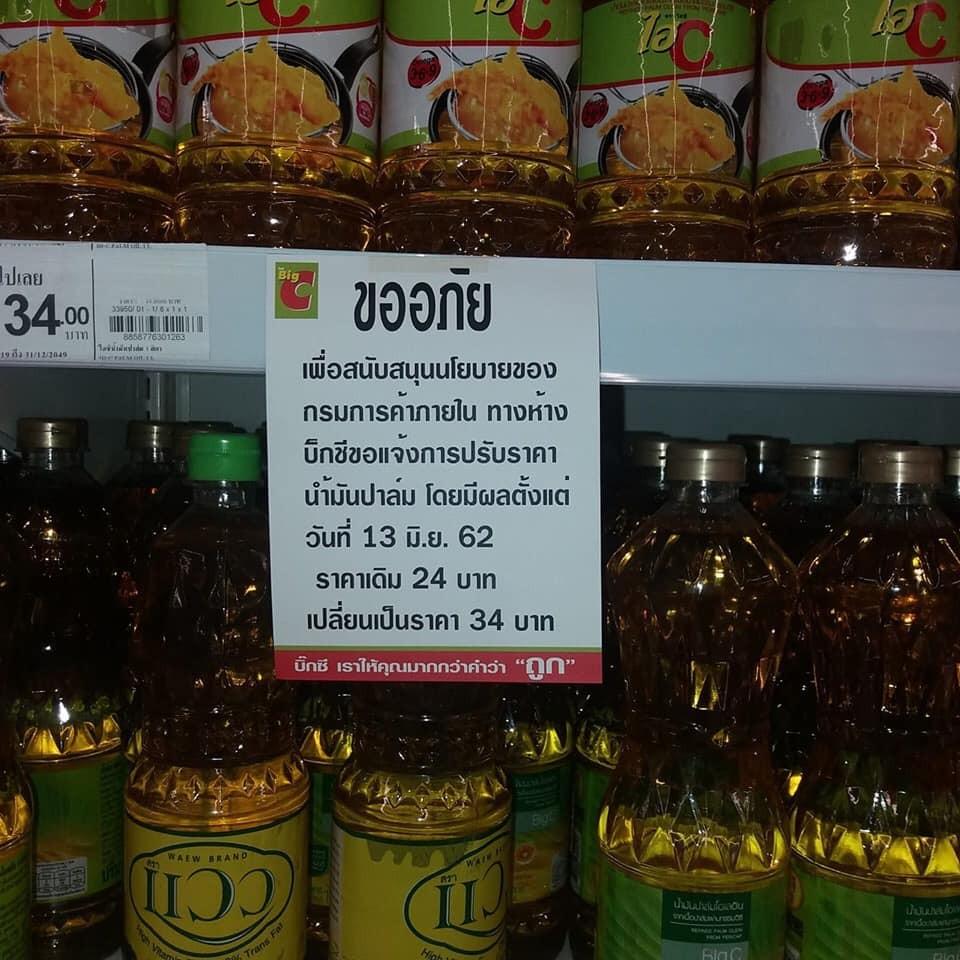 Whichai Phochanakij, director-general of the Internal Trade Department, said the request for cooperation aims to raise the prices of fresh palm nuts and increase the income of palm growers who have long suffered from slumping prices.

Due to massive supply, the price of domestic fresh palm nuts hit a 10-year low in April of 1.80 baht per kilogramme, far below growers' production costs averaging 3.45 baht per kg last year and four baht per kg in 2017.

"Many retail stores have raised the price of a one-litre bottle of cooking palm oil to 34-35 baht from 25-26 baht over the past few weeks as requested by the department to reflect higher crude oil palm prices, which stand at 19.50-20 baht per kilogramme, up from 14-15 baht," Mr Whichai said. "Higher crude oil palm prices have drawn up accordingly the domestic prices of fresh palm nuts to 3.50 baht from 2-2.50 baht per kg in the last two weeks, which gives farmers 3.01 baht per kg, or slightly above their production costs."

Nonetheless, there are certain retailers, especially in modern trade, that remain unwilling to cooperate with sales promotions for cooking oil.

According to Mr Whichai, promotional programmes are fine as long as sales prices under the programme are not below production costs.

Mr Whichai said the department has scheduled a joint meeting with palm oil makers and distributors on Monday to elaborate the purpose of the department's request for cooperation.

"We want to clarify to the public that the department has not ordered retail stores to raise cooking palm oil prices, but requests they impose prices in line with higher production costs and realise the impact on farmers who have been hard hit for so long by the price declines," he said. "The government has spent about 2 billion baht to shore up prices and ease farmers' hardship."

According to Mr Whichai, the higher prices of domestic palm oil are also due to lower crude palm oil stocks, which stand at only 250,000 tonnes from 300,000 tonnes earlier, thanks to the government's measures.

The government has bought 160,000 tonnes of crude palm oil for power generation at the Bang Pakong plant of the Electricity Generating Authority of Thailand and is extending the amount to 200,000 tonnes.

The government is also promoting the use of biodiesel B10 and B20 in big trucks and the use of pure biodiesel (B100) in agricultural machinery, Mr Whichai said.

"The sales promotion for goods below the market prices is considered irregular. The promotions should run only for the short term, 1-2 weeks," he said. "In the event that modern trade channels run a promotion campaign selling the cooking oil prices below costs for a continuous basis or alternate sales promotion for bottled cooking palm oil of various brands below cost on a continuous basis, they are liable to violate the Trade Competition Act, facing a penalty of not more than two years in jail or fines of not more than 10% of sales in the year they violate or both."

A source from the Thai Oil Palm and Palm Oil Association who asked not to be named said the association agreed with the move, noting that modern trade has never given information about its bottled cooking palm oil stocks, though the crushing mills and refineries have all reported their stocks in a collaborative move to stabilise domestic prices.

In the past, certain modern trade channels have sold bottled cooking palm oil at a loss to draw customers to their stores and made their own house brands, resulting in price competition and the price slump, the source said.

Yesterday, share prices of companies associated with the palm oil business rallied after the Commerce Ministry's call for retailers to help mark up prices of cooking palm oil.

Trade volume, however, remained slim because the companies are small firms with low trading liquidity.