Palming off the problem
Business

Palming off the problem

A bunch of oil palm fruits. (Photo by Assawin Phakkawan)

An oversupply of fresh palm nuts has prompted authorities to boost prices by marking up the price of cooking palm oil, much to the dismay of retailers.

While such a move could boost palm nut prices, it could also impact food prices and the cost of living.

Indonesia is expected to produce the biggest share at 40.50 million, followed by Malaysia at 20.50 million. The two countries account for 84.4% of global production. Thailand ranks third, producing 2.90 million tonnes a year or 4% of global output.

"The government is on the right track in tackling the palm price slump now that it needs to manage the crude palm oil supply to maintain it at the country's safety zone at an average of 150,000-200,000 tonnes," said Aat Pisanwanich, director of the Center for International Trade Studies at the University of the Thai Chamber of Commerce.

"If stocks stay below that level, crude palm oil prices will rise sharply and directly affect the prices of bottled cooking palm oil for consumers and the production costs of the processing industries."

Manat Puttharat, chairman of the Oil Palm Growers Federation, said palm growers support the government's policy to help shore up fresh palm nut prices and call for cooperation from retailers to refrain from launching any sale promotions for bottled cooking palm oil, as such programmes would push down farm prices for fresh palm nuts.

"Growers have been calling on retailers to stay away from any sales promotions that suppress nut prices, but their calls have been ignored so far," Mr Manat said. "Even worse, modern trade have their own house brands, resulting in price competition and a price slump." 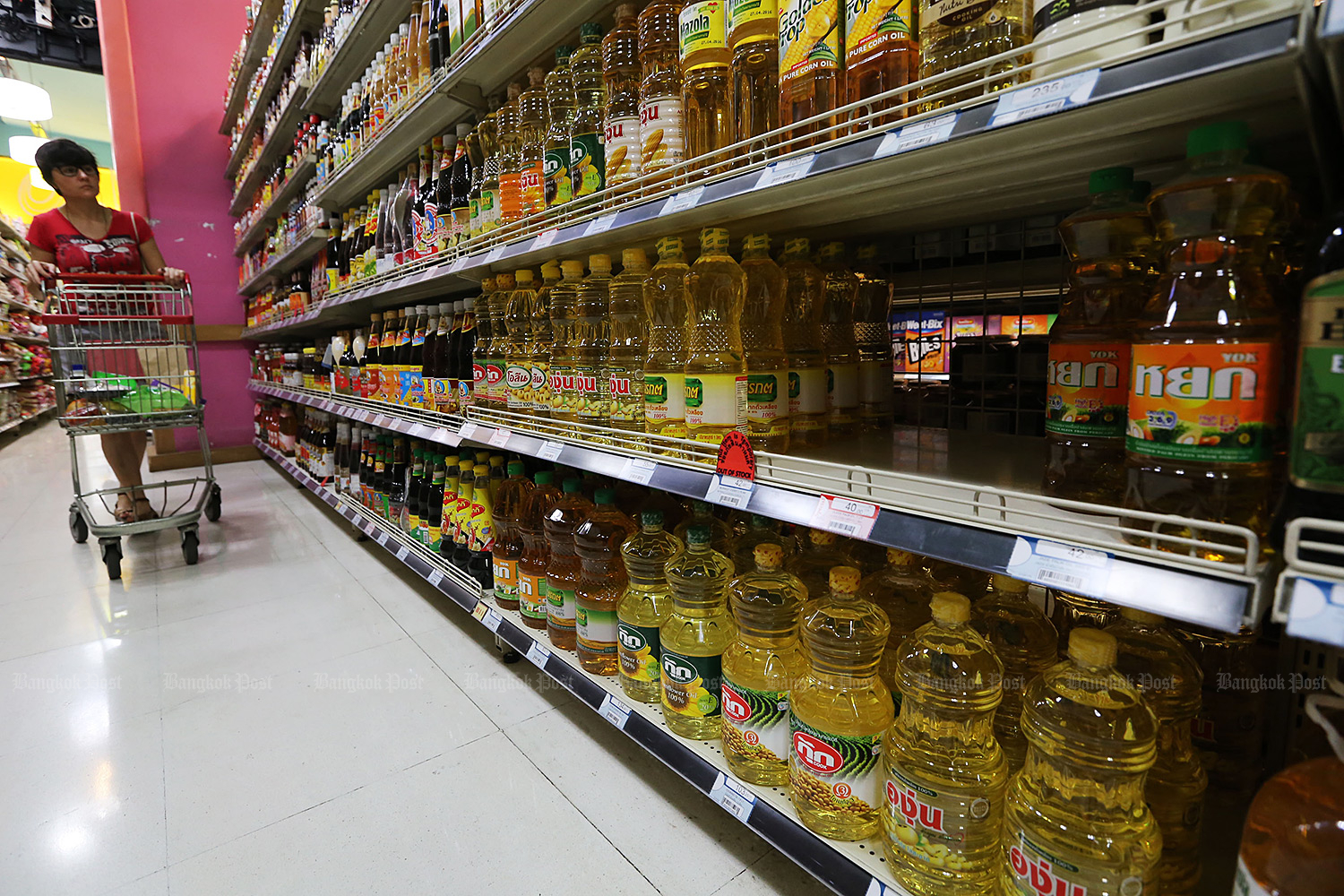 Cooking palm oil from different brands is available at a supermarket. (Photo by Jiraporn Kuhakan)

For almost a year, farmers have suffered because of falling prices. They have lost an estimated 15 billion baht worth of combined income during the period, according to Mr Manat.

Due to massive supply, the price of domestic fresh palm nuts hit a two-decade low in April at 1.60-1.80 baht per kilogramme, far below growers' production costs and the average 3.45 baht per kg last year and four baht per kg in 2017.

The government has spent about 2 billion baht to rev up prices and ease farmers' hardship.

Higher prices of domestic palm oil are also due to lower CPO stocks, now at 250,000 tonnes, down from 300,000 tonnes earlier, thanks to government measures.

The state has bought 160,000 tonnes of CPO for power generation at Bang Pakong power plant of the Electricity Generating Authority of Thailand (Egat) and is extending the volume to 200,000 tonnes.

According to Mr Manat, fresh palm nut prices have edged up closer to the production costs of small-scale growers, which stand at an average 3.80 baht per kg, thanks to the government's measures.

Growers will also be entitled to profit if prices can be driven up to four baht per kg, he said.

Somchai Pornratanacharoen, president of the Thai Wholesale and Retailing Association, said the government has yet to get to the point in tackling the palm oil problem.

Focusing on the modern retail channel cannot provide a solution in the long run, he said, noting that state measures aimed at helping to shore up the prices of farm products could hurt consumers.

"The Commerce Ministry has to solve all aspects of the issue, from palm growers and palm-refining factories to retailers," Mr Somchai said.

He suggested the government introduce an appropriate rate or a reference price for cooking palm oil sold at retail stores, adding that prices should be changed in line with the price of domestic fresh palm nuts each season. 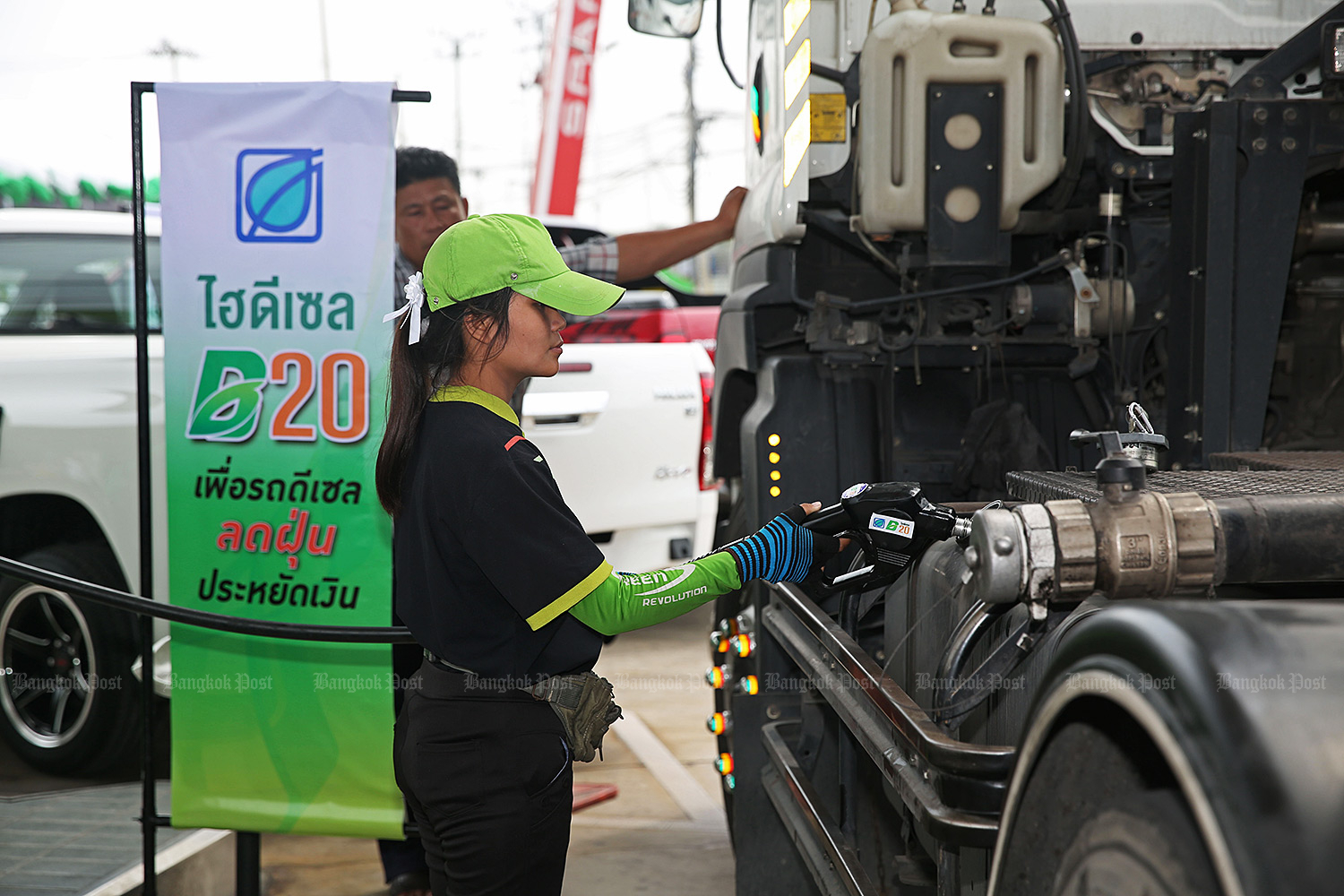 B20 fuel for diesel vehicles helps expand the use of palm oil. (Photo by Varuth Hirunyatheb)

The Public Health Ministry should simultaneously take part in inspecting the quality of cooking palm oil, since quality varies according to the refining process.

"The prices of different brands of bottled cooking palm oil vary, depending on the price of fresh palm nuts the refineries obtain from farmers and the refining process," Mr Somchai said.

On the other hand, Whichai Phochanakij, director-general of the Internal Trade Department, said it's not proper practice for retailers to launch sales promotions, selling bottled cooking palm oil below cost to entice customers while the farmers face hardships from the drop in farm product prices.

"Palm oil for consumption amounts to about 1.1 million tonnes a year or about 40% of CPO consumption," he said. "Any price competition will definitely hurt farmers."

Another key measure devised by the government to absorb surplus fresh palm nuts is to blend CPO with diesel fuel.

This biodiesel, also known as B100, is produced from vegetable oil, animal fat and used cooking oil.

Before blending with diesel and used as fuel for vehicles, the production process converts smaller molecules to ethyl ester and methyl ester. The finished oil can replace regular diesel. 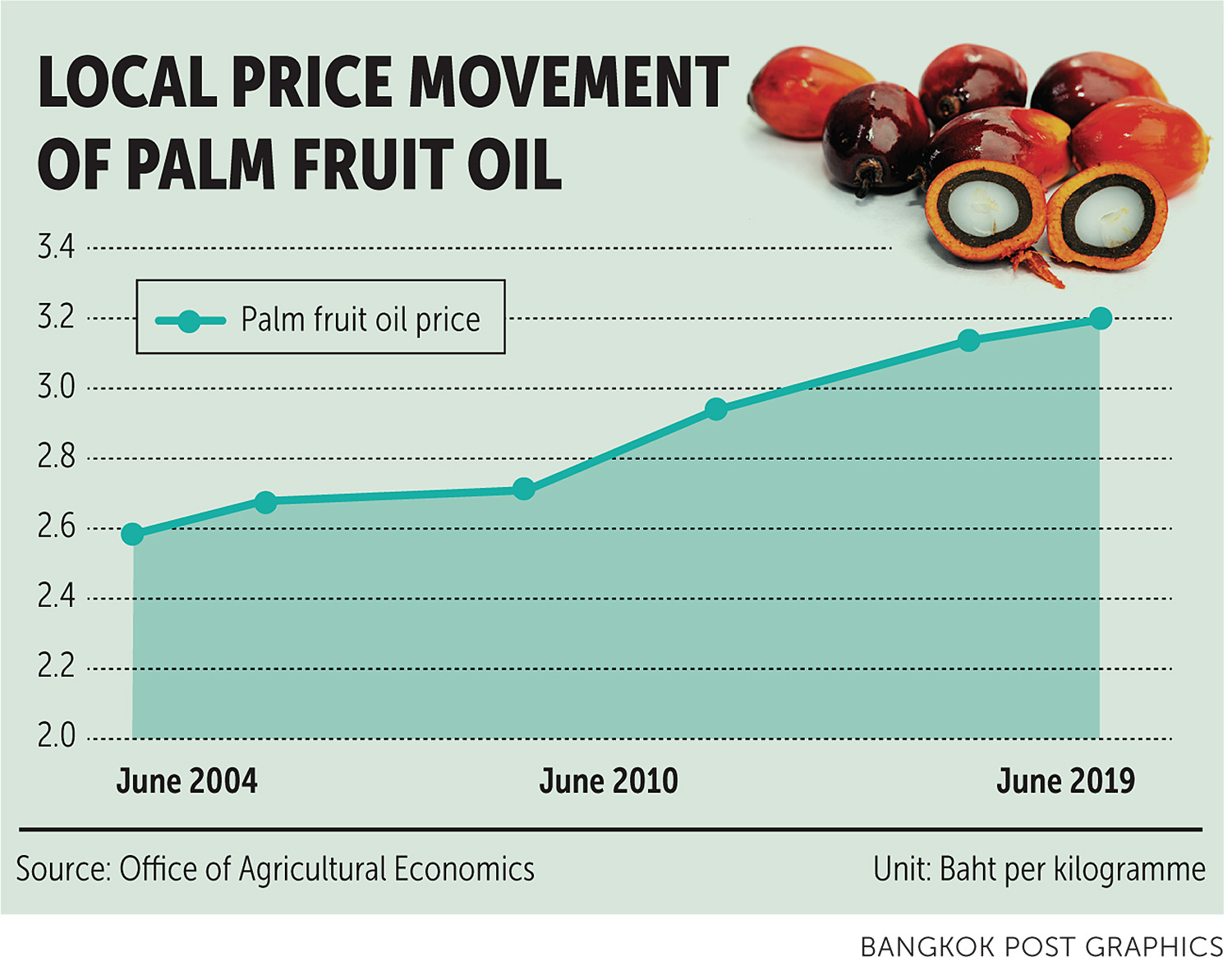 The government raised the content to 10% (B10) and 20% (B20) in April 2019 in a bid to absorb the surplus volume of CPO and increase the price of fresh palm nuts to stay above three baht per kg.

At present, the production of biodiesel is mainly for domestic use, while the import of biodiesel remains under the control of the Energy Business Department.

Energy Minister Siri Jirapongphan said policymakers are trying to handle the massive surplus of CPO, which is occurring again in 2019, and come up with a sustainable solution to mitigate the problem.

"We plan to mandate B10 as traditional diesel, replacing B7 in 2020, while B20 is planned as the alternative diesel with a subsidised price," Mr Siri said.

Policymakers have also ordered the state-run Egat to use CPO for its power generation at the Bang Pakong power plant in Chachoengsao province.

Egat has agreed to purchase two batches of CPO. The first completed purchase agreement was for 160,000 tonnes. The second order, at 200,000 tonnes, is being processed.

Both measures from the energy and power sectors have increased the price of fresh palm nuts to 3.20 baht per kg since mid-June from 1.80 baht in April.

The price of CPO has risen to 20 baht per kg in June from 16 baht in April.

"Currently, total crude palm oil purchased by Egat has reached half of the total output that the cabinet approved," Mr Siri said, adding that once the price of fresh palm nuts is lower than 3.50 baht per kg, Egat will be required to purchase CPO for power generation.

Many small and medium-sized enterprises in the palm plantation business view poor management and regulations of crude palm oil imports as loopholes because no law restricts the practice of smuggling in CPO from Malaysia and Indonesia, the other two major growers of fresh palm nuts.

Those two countries prohibit the import of palm oil products.

Chayodom Suwanwattana, a local palm tree grower, said Thai farmers are calling for strict control from the government to stamp out the smuggling of CPO from Malaysia and Indonesia.

"This smuggling is also a reason for the huge surplus in the country," he said. 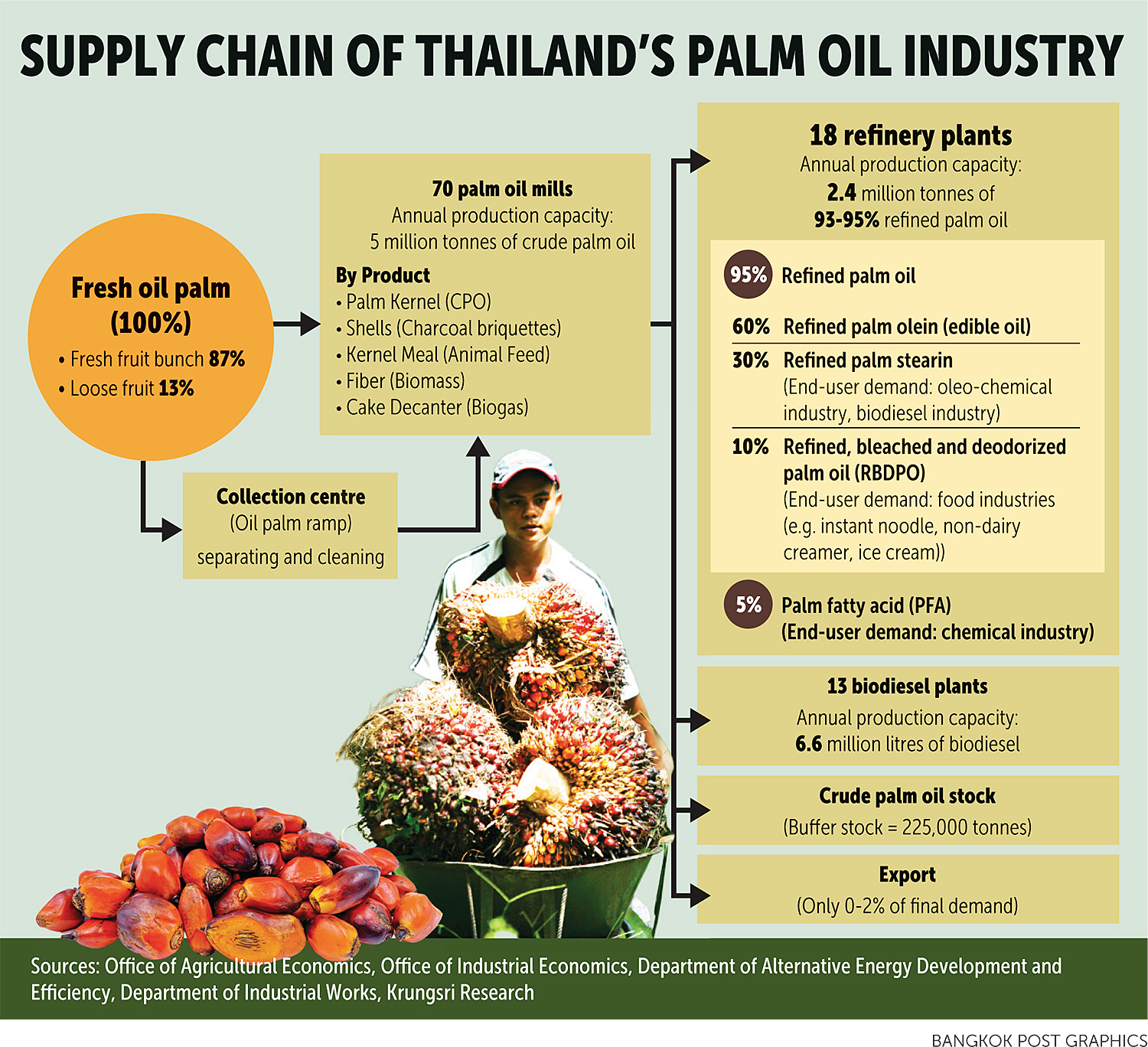 According to the European Commission, the cultivation of palm oil, mostly in Indonesia and Malaysia, results in excessive deforestation. It should therefore not be eligible to count towards the EU's renewable transport targets for national governments.

Palm oil production is one of the key drivers of rainforest destruction, as well as swamp and peat land drainage in Southeast Asia and increasingly in South America -- soy being the other oil crop directly associated with deforestation.

More than half of all the palm oil imported into Europe ends up in the fuel tanks of cars and trucks.

Mr Chayodom said the situation could worsen over the next couple of years because Europe will ban the import of B100 if exporting countries cannot declare that the plantation areas do not result in deforestation.