The region's infrastructure needs are vast and complex, and require more creative approaches to collaboration and financing. By Tanyatorn Tongwaranan in Cebu, Philippines

Infrastructure is one of the major catalysts for sustainable economic and social development in rapidly growing Asia. But financing the region's massive power, water, transport and telecommunications needs is becoming a growing challenge.

Urbanisation is one of the biggest drivers of infrastructure demand. The United Nations has projected that the world could add another 2.5 billion people to urban areas by 2050, with close to 90% of this increase taking place in Asia and Africa.

"Cities generate over 80% of gross domestic product (GDP) in many countries across Asia and the Pacific. They are engines of economic growth that have lifted millions from poverty," said Robert Guild, chief sector officer for sustainable development and climate change at the Asian Development Bank (ADB).

"But as cities swell in size, they are under increasing strain, requiring the need to improve infrastructure, services and resilience." 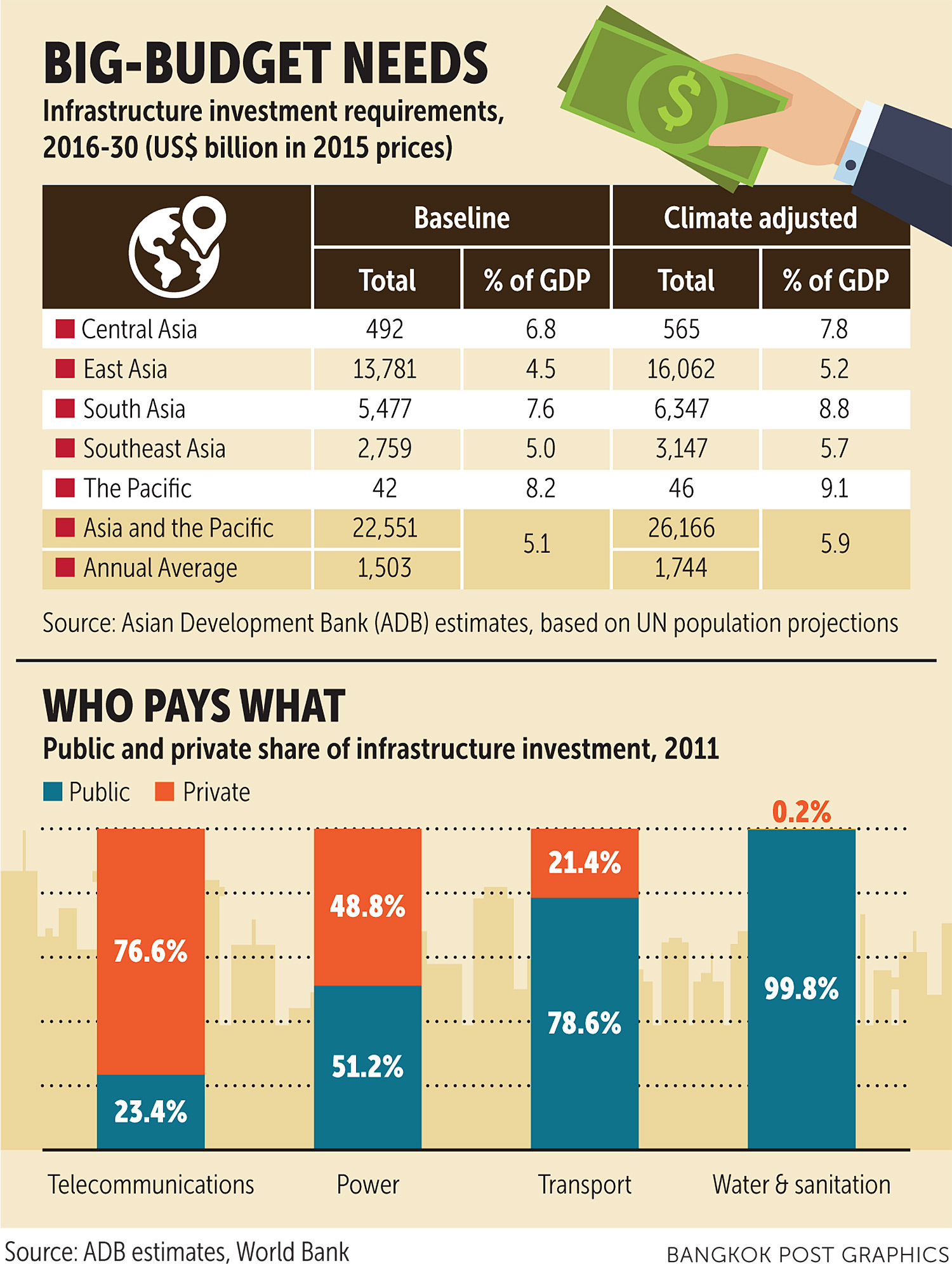 The ADB estimates that Asia will need to invest US$26 trillion before 2030, or about $1.7 trillion a year, to meet its infrastructure needs, said Rana Hasan, director of the Economic Research and Regional Cooperation Department at the ADB.

A new dimension to the challenge lies in the relationships between climate change and infrastructure, he pointed out. "The challenge is how we can ensure stronger climate-proofing (resilient infrastructure for future natural disasters) and climate mitigation (avoiding a 2-degree rise in global temperatures)."

"Countries that have better infrastructure are also the ones with higher GDP per capita. In cases of extreme poverty (people earning $1.90 per day or less), there is also a very close inverse correlation," he said.

A handful of ambitious infrastructure projects are taking shape across the region, led by China's Belt and Road Initiative (BRI), which could expand world GDP by $7.1 trillion annually if all projects come to fruition.

In Southeast Asia, work is under way on an Asean Smart City Network that would connect 26 cities with a focus on innovative technologies and urban planning. Indonesia has announced $327 billion worth of infrastructure upgrades in various stages of planning or construction, and the Philippines has made the $180-billion "Build Build Build" programme the centrepiece of its national agenda. But many countries in Asia are still investing less than 3% of their GDP in infrastructure.

With the exception of Vietnam, where investment in infrastructure is 5.7% of GDP, the figures in Southeast Asia range from 1.6% to 2.6%, which is considered minuscule for developing countries. 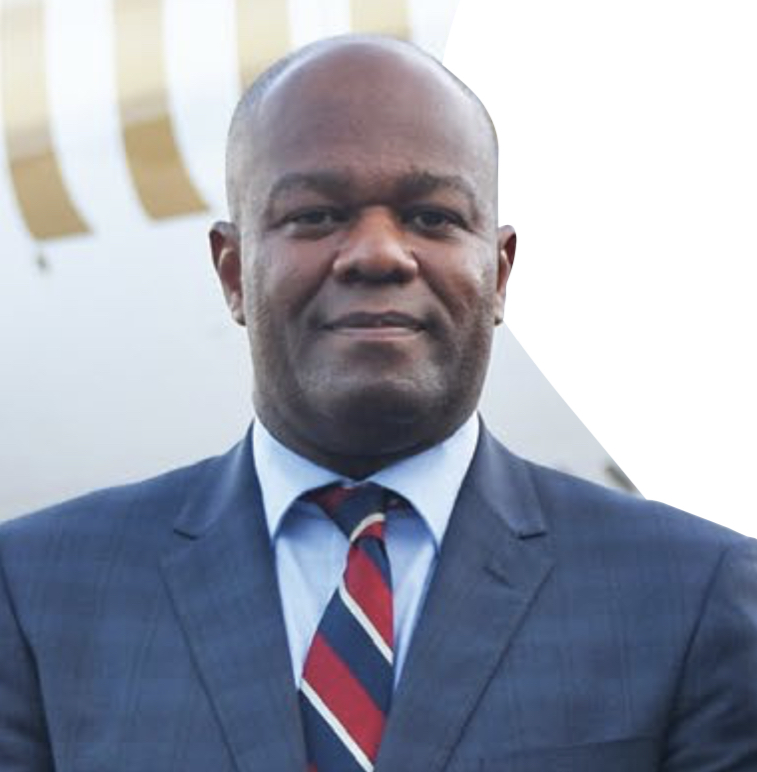 "An airport is an economic engine of growth. We are in a tourism-driven economy and we aim to use tourism to help generate economic growth and activity." — Andrew Harrison, GMR Megawide Cebu Airport Corporation

"In the last decade, Asean countries have been taking big steps to catch up on strengthening and developing infrastructure, supported by investments from Japan and China," he said. "However, these efforts are still not sufficient.

"Increased urbanisation and a surge in rural-urban migration has made infrastructure development in Asean countries even more critical."

Investment needs are greatest in the transport (42.1%) and power sectors (37.8%), followed by telecommunications (14.8%) and water and sanitation (5.3%). The gap between what the region has been investing and what it needs is around 4-5% of projected GDP.

There is also an imbalance in the public and private share of infrastructure investment in each sector. The telecom and power sectors are more attractive to private finance (see chart), where the contributions are 76% and 48% respectively, while in water and sanitation the private component is less than 1%.

The three major investor groups in infrastructure are central and subnational governments, state-owned enterprises and the corporate private sector. In the past, infrastructure projects were owned or guaranteed by governments but this model is proving to be unsustainable or, in some cases, impossible.

"Historically, infrastructure was owned or guaranteed by governments, but governments don't have an unlimited budget or are unable to provide a guarantee for new projects," said Seth Tan, executive director of the Singapore government unit Infrastructure Asia.

Bridging the funding gap is possible, however, through the creation of a network of authorities, investors and industry specialists for infrastructure investment, he said.

To sustainably develop, finance and carry out infrastructure projects, the region needs to mobilise private capital and bring policymakers, investors and industry specialists together to promote efficiency and transparency in projects that are socially responsible and commercially viable.

"To meet this gap, Asean economies will have to undertake fiscal reforms to generate additional revenues for raising public investment, promote private sector participation in infrastructure and improve planning, design and execution of infrastructure projects to increase the efficiency of investment expenditure," said Mr Hasan. 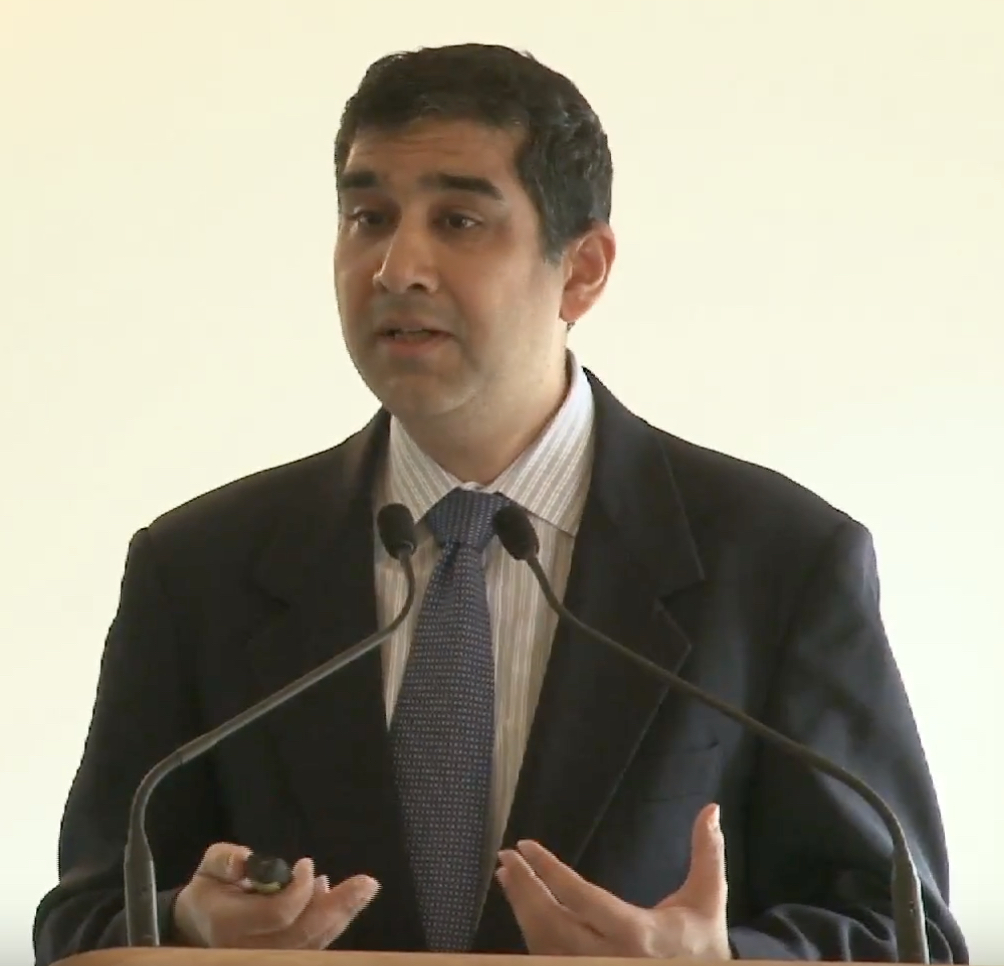 Climate change is becoming a new factor that must be considered when planning infrastructure, says Rana Hasan, director of the Economic Research and Regional Cooperation Department at the ADB.

Fiscal reforms, he said, could include a cascading tax system based on rationalised rates, as well as subsidy reduction in areas where the middle and upper class are the main beneficiaries instead of the poor.

Mr Guild said history shows that economic development progresses more effectively when the public sector involves the private sector and makes use of its labour, capital and resources to increase business efficiency, lower production costs and increase returns on investment.

Mr Guild says people need to look at public infrastructure not only as an input to production, but as a sustainable means to raise the productivity of private capital and labour.

Mr Chin noted that some countries in Asean have strengthened their public–private partnership (PPP) policies and regulations in line with accelerated infrastructure development.

"Public-private partnerships, as well as funding from organisations such as the ADB, JICA (Japan International Cooperation Agency) and AIIB (Asian Infrastructure Investment Bank), are keys to helping governments in this regard."

However, he noted that the PPP model comes with political risks, as seen in last year's election results in Malaysia.

"Governments should note that while PPPs are important, not all projects can or should be delivered as PPP projects," he said. "Governments can increase investor appetite by developing well-designed PPP programmes with clear project pipelines, transparent bidding and contracting models."

"These lenders are able to spot on-the-ground opportunities, and they possess local knowledge and project finance know-how to process infrastructure financing proposals in partnership with development organisations," he said. "They can structure, underwrite and syndicate significant sources of private funds." 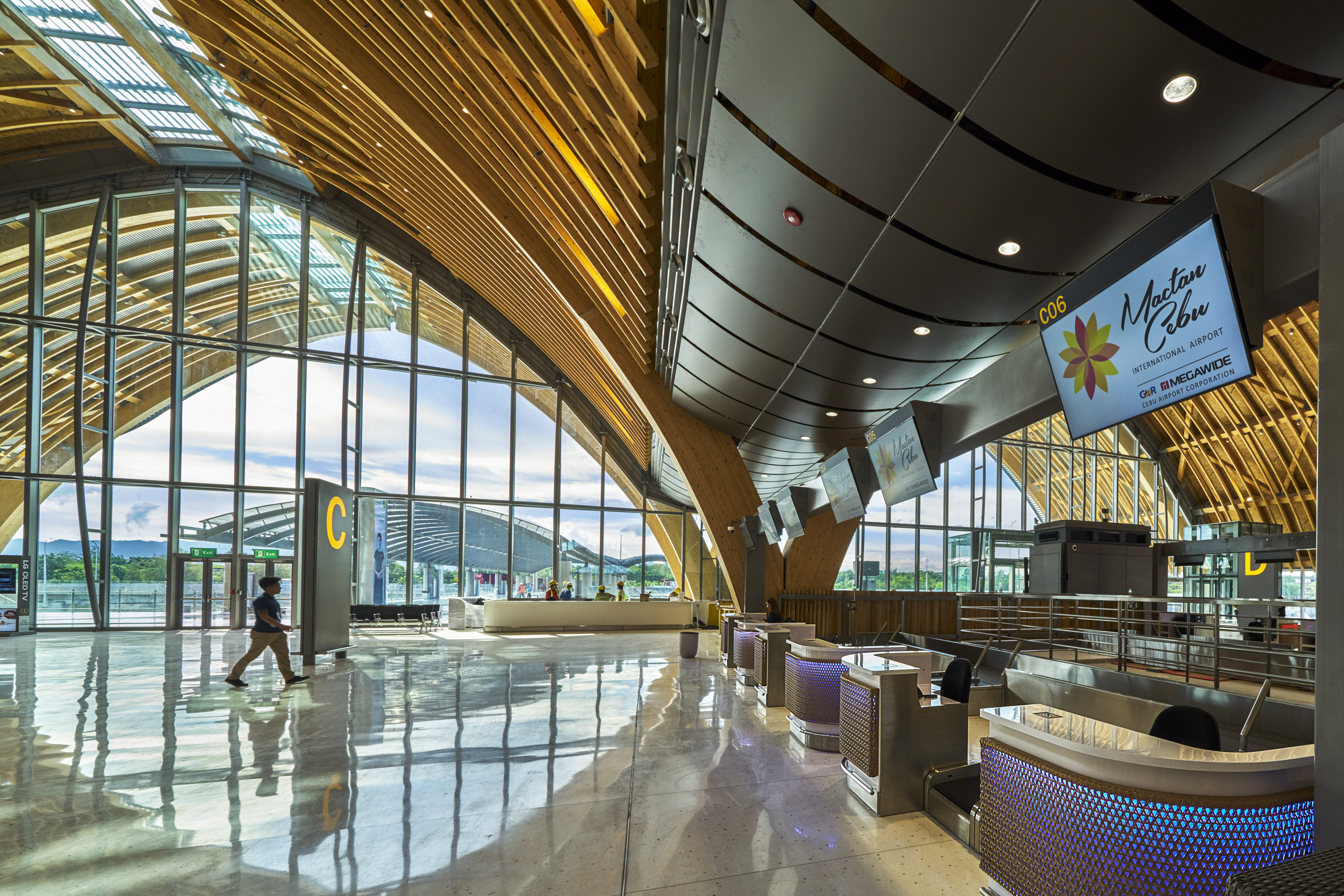 "Commercial banks are the fabric that binds all these parties together by ensuring that projects are structured appropriately and efficiently from day one," he said.

One vivid examples of a successful outcome from public-private collaboration is the ongoing Mactan-Cebu International Airport (MCIA), a $17.5-billion expansion project funded by the ADB to transform the passenger travel experience with innovation and efficiency.

"MCIA is one of the flagship projects under Philippine President Rodrigo Duterte's 'Build Build Build' infrastructure programme. It's the first and only PPP airport project in the country and successfully demonstrates the warmth and friendliness of the local culture through its unique design," said Andrew Harrison, chief executive adviser at GMR Megawide Cebu Airport Corporation (GMCAC), a Filipino-led joint venture.

Megawide is a Filipino construction company specialising in precast concrete structures designed for the region, and India-based GMR is an international operator specialising in airport development, operations and management.

"MCIA is the most beautiful airport in the country today and without doubt, this project will become a catalyst for inclusive countryside development in the region," Mr Duterte said during the inauguration of Terminal 2.

"By serving millions of passengers annually, this new facility will address growing passenger demand in Metro Cebu. It will also promote tourism, stimulate commerce and spur economic activity in the Visayas," he said.

Cebu, which is a part of Central Visayas, has become a hub for international and domestic travellers, making the region the most preferred tourist destination in the country.

According to government figures, tourist arrivals in Central Visayas last year reached 8.1 million, a 16% jump from 2017. Tourism receipts reached $860 million with estimated daily spending from foreign tourists averaging $130 per head and from domestic tourists at $24.

"An airport is an economic engine of growth. We are in a tourism-driven economy and we aim to use tourism to help generate economic growth and activity," said Mr Harrison.

By way of example, he said that in 2014 when the airport project started, the going rate for an entry-level job in customer service in the area was 9,600 pesos ($188) per month. GMCAC decided that the starting salary for the people it employed would be 15,000 pesos.

"Many people believe that it's the job of the government to provide for the economic needs of the people, but in reality the private sector has a big responsibility to play in terms of helping people to achieve greater skills and career advancement," said Mr Harrison.

The establishment of MCIA Terminal 2 is also expected to contribute to greater trade and development facilitation.

Cebu is a large furniture manufacturing hub but many companies used to export their goods via Manila, which required transporting them via road and then freight service from Manila airport.

"The old model was extremely inefficient, congested, time consuming and expensive. Through this new Terminal, we are able to bring in direct route that allows locals to export goods directly from Cebu," he said.

Four Seasons Resorts in Florida, for instance, sources most of its furniture and accessories from the award-winning Filipino furniture designer Kenneth Cobonpue. Thanks to the additional direct routes, shipping out the products has become much more efficient.

"There is a global impact to this local furniture manufacturing as the airport allows connectivity between Cebu and the rest of the world," Mr Harrison said.

Lastly, a well-constructed airport also helps bring in more revenue from tourism, the business sector and leisure and hospitality businesses, he added.

Mr Chin of BCG said that there is no one-size-fits-all model for infrastructure development, so governments across the region can think beyond traditional forms of partnerships.

"An integrated developed approach can deliver significant benefits for regions, as illustrated by the Trans-European Networks and the Central American Electrical Interconnection System," he said.

Similarly, he said, Asean can benefit from greater regional connectivity, and the China-led BRI provides an opportunity for Asean to do so over the next decade.

Credit Suisse Cuts Business With SoftBank and Its Founder, Son