Hemmed in by US pressure, the Bank of Thailand has made little effort to weaken the baht despite protestations from export-reliant players

Fear and loathing of the baht's rapid gain have been on the rise, especially among Thai exporters, as the local currency is perceived as a conduit for speculators to reap short-term gains.

The baht's value hit a six-year high in mid-June of 31.05 against the US dollar as rate-cut signals by the US Federal Reserve prompted an influx of offshore inflows into both high-risk and safe-haven assets.

With a 6.03% year-to-date appreciation, the baht has effectively cemented its status as Asia's best-performing currency against the greenback in 2019.

The main reasons the baht is perceived to be a safe-haven asset are Thailand's large foreign reserves, continued current account surpluses and relatively low public debt.

The "blame" for the surging baht has once again been placed on the Bank of Thailand and its perceived feeble management of foreign exchange as the currency's value continues to edge up, much to the dismay of exporters.

"Some of these offshore inflows are hot money moving into short-term [Thai government] bonds and equities," said independent academic Somjai Phagaphasvivat. "If the central bank keeps the benchmark interest rate on hold, this will attract further capital inflows. Doing nothing will eventually spur an impact on Thai exports." 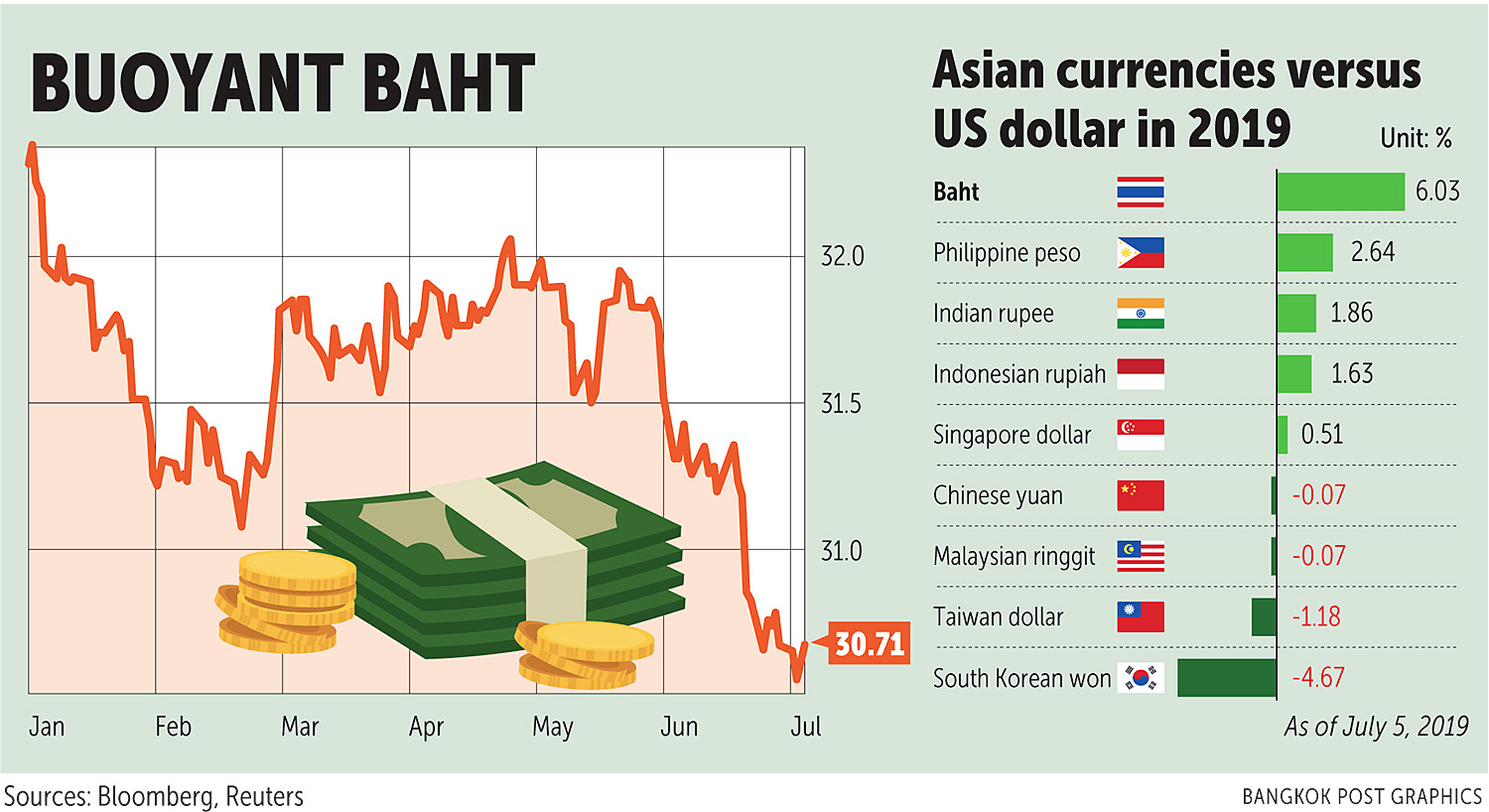 "Hot money" remains a debatable topic among economists and policymakers. The term is characterised as speculative capital flows aimed at earning a short-term profit on interest-rate differences or anticipated exchange-rate shifts.

Despite differing views on offshore capital inflows, one thing economists agree on is that the baht will retain its upward bias in the coming months and that rate cuts are the central bank's most effective instrument for reining in the strengthening baht.

"The Bank of Thailand has not put a huge effort into taking care of the baht, for fear of being added to the US watch list for currency manipulation, and this has led to the baht's rapid rise," Mr Jittipol said.

The local currency's value against the dollar could briefly depreciate soon over concerns about Thailand's economic slowdown, according to a KTB forecast.

Still, baht appreciation is expected to recur, hovering in a band of 30.00-30.25 to the dollar later this year, Mr Jittipol said.

"If we don't axe the policy interest rate, our rate will become higher relative to the Fed funds rate after [the latter's imminent] cut," he said. 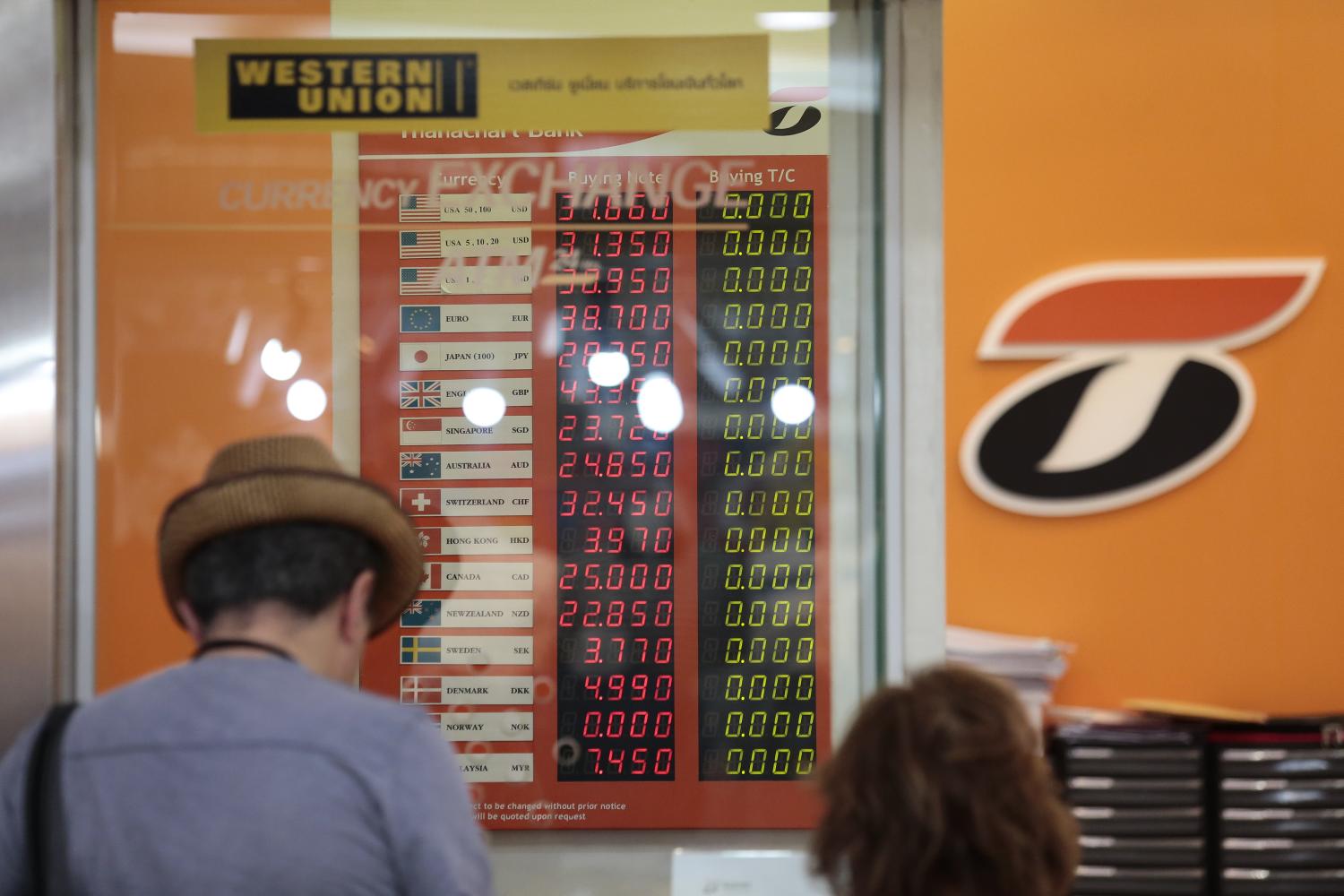 The central bank's rate-setting panel is expected to cut the policy rate by 25 basis points in December to 1.50% and by a further 25 basis points in the first six months of 2020 to 1.25%, matching the previous record low set in 2009, according to CIMBT.

The Bank of Thailand will begin with its softest measures before resorting to rate cuts as the final tool, Mr Amonthep said.

He pointed to Thailand's economic structure -- with massive tourism income representing 14% of GDP along with a high current account surplus and foreign reserves -- as the culprit in the baht's appreciation.

While a rate cut is an option to rein in the baht, policymakers have to think long and hard on the pros and cons of such a move, as it could jeopardise policy space for future manoeuvres.

Lowering the rate by a quarter-point may not induce a desirable outcome, as the baht's value could depreciate by a mere 10-20 satang, said former central bank governor Prasarn Trairatvorakul. 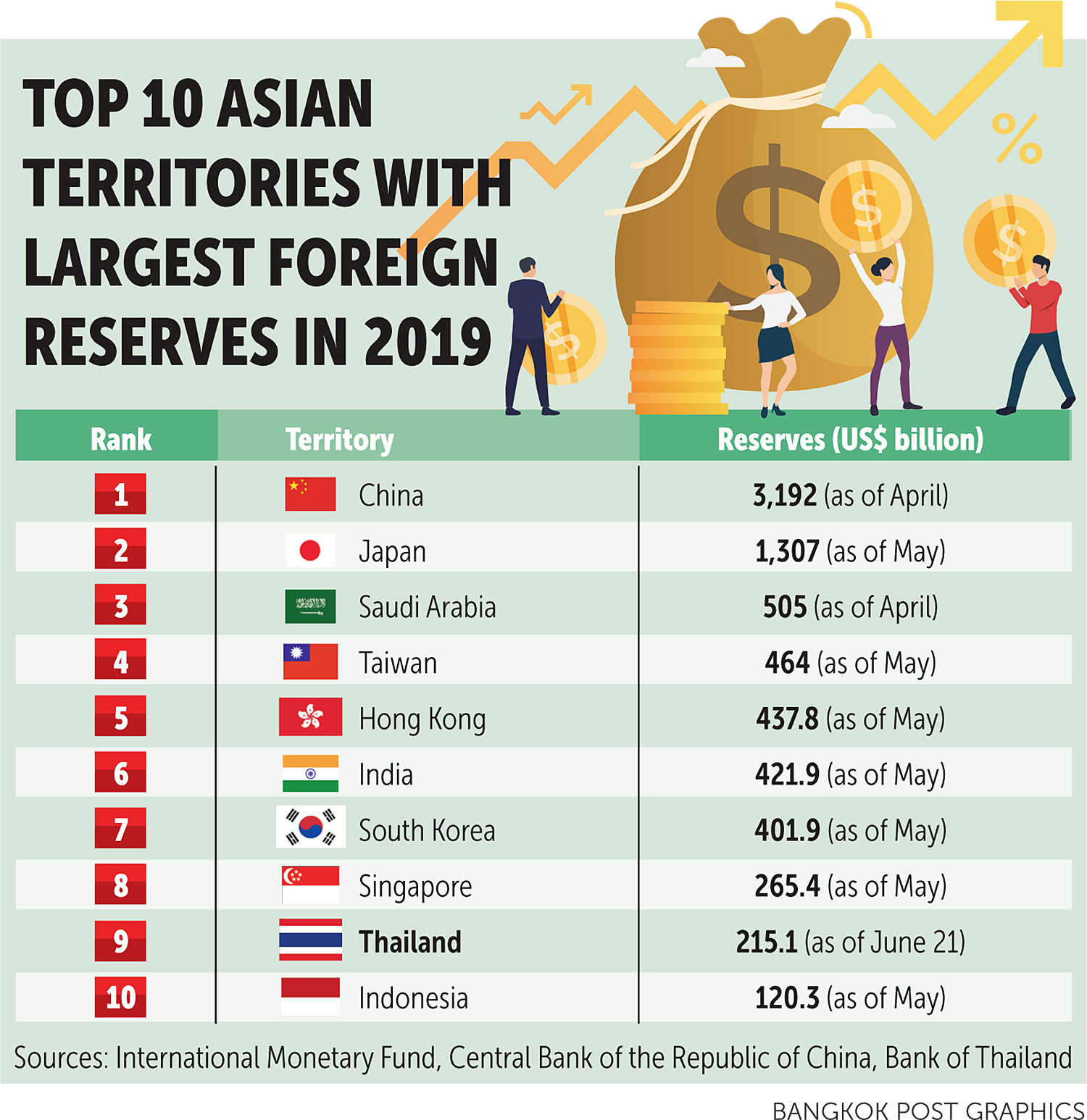 Besides the existing limited policy space for the Monetary Policy Committee to act in, domestic financial stability is another point to ponder, Mr Prasarn said.

Thailand's household debt in the first quarter rose to 12.96 trillion baht, making up 78.8% of GDP on a seasonally adjusted basis, up from 12.83 trillion baht in last year's fourth quarter.

"Cutting the policy interest rate is one of the tools [to curb the baht appreciation], but benefits from such a move remain opaque," Mr Prasarn said.

Seen as an attempt to rein in the baht's value, the Bank of Thailand is tapering 60 billion baht out of its July issuance of three-, six- and 12-month bonds, in a move likely aimed at curbing hot money and the baht's rapid gain.

Designed in an attempt to rein in offshore capital inflows, the move has yet to prove effective in preventing further appreciation of the baht.

There were foreign outflows from Thailand's bond market during the first four months of 2019, but offshore funds began to return in May, according to the Thai Bond Market Association.

Year-to-date net foreign outflows into Thai bonds with a maturity of less than one year stood at 49.3 billion baht as of July 2, while net inflows into longer-maturity debt securities totalled 52.5 billion baht.

One factor supporting the influx of offshore funds into Thai bonds is the JPMorgan index, the global benchmark of bond indices, which now includes the 20-year Thai government bond, Mr Tada said.

Passive fixed-income funds, which have an investment policy to track this bond index, have had to increase Thai bond weighting accordingly, he said. 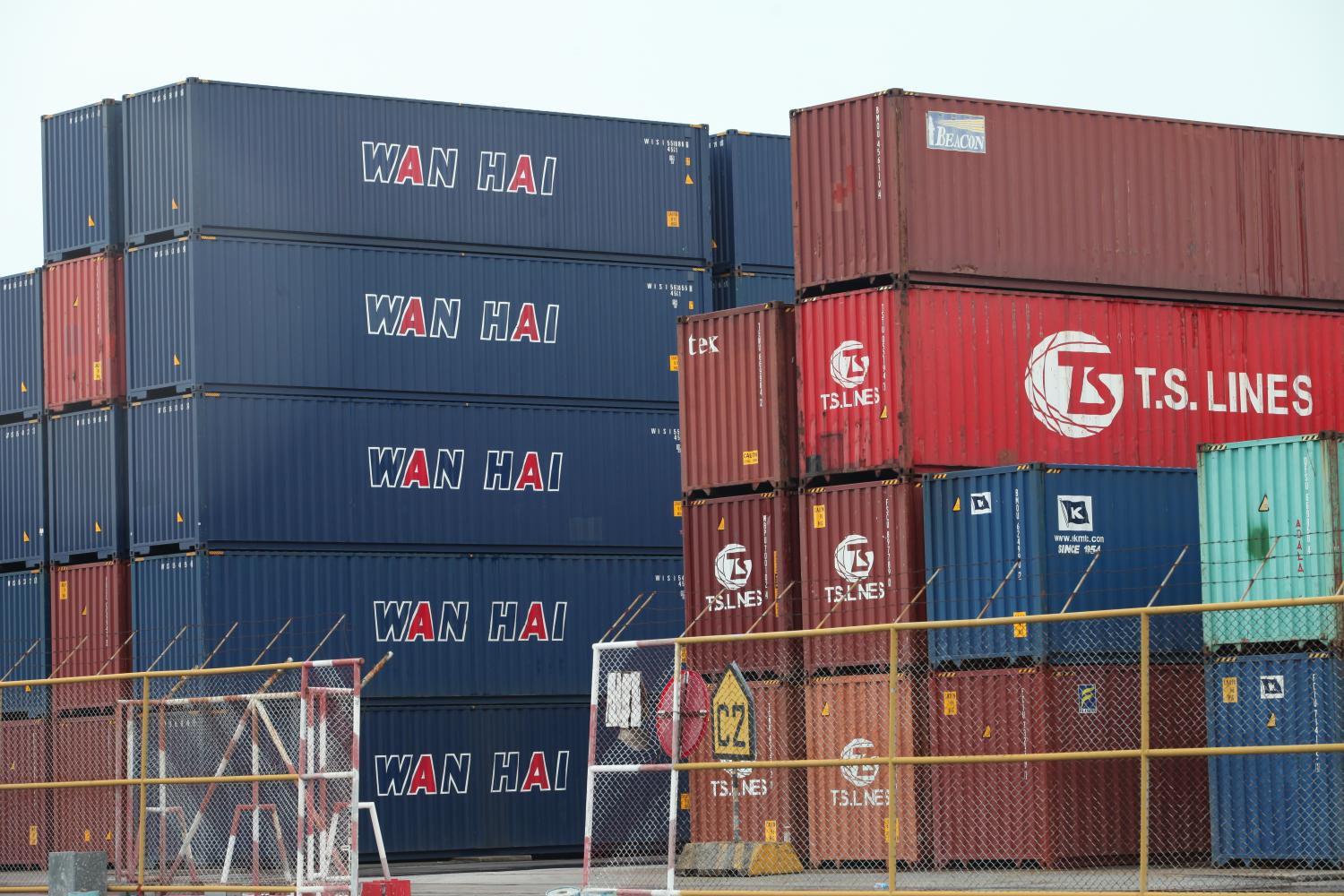 Exports are the sector hit hardest by the strengthening baht. APICHART JINAKUL

Bonds issued by the government and the Bank of Thailand are the only two kinds of debt securities favoured by foreign investors because of high liquidity, Mr Tada said.

The yield curve of short-term Thai bonds, defined as those with a maturity between three months and three years, is currently lower than the policy interest rate because of hefty demand in short-term debt securities.

"This implies that the policy interest rate is not used as a reference for pricing right now," Mr Tada said. "It is believed that central bank executives will consider other monetary measures if a huge influx of foreign funds still moves into Thai bonds."

As exports make up about 70% of GDP, the strengthening baht has proved a nuisance affecting exports of local products and causing Thai merchandise to become more expensive overseas.

If the baht continues to appreciate, several industries may feel the pinch. Many companies are already starting to book losses because of the strengthening baht, said Ghanyapad Tantipipatpong, chairwoman of the Thai National Shippers' Council.

And the adverse repercussions don't stop there. Banks could reduce credit lines for exporters amid continuous revenue losses, and entrepreneurs will eventually have problems caused by a lack of working capital.

"We don't want to see the baht strengthen further," Ms Ghanyapad said. "We want a weaker baht because it translates into our income. If the baht's value becomes weaker, farmers will be able to sell agricultural products at a better price and obtain more income."

During January-May, exports fell by 2.7% from the year-earlier period while imports dipped nearly 1%.

The soaring baht was also identified as one of the contributors to the slowdown of inbound tourism during the first half.

The baht's appreciation, together with prolonged US-China trade tensions, helped trim tourism growth during the first six months to 2% year-on-year, according to the Tourism Authority of Thailand.

The number of international arrivals fell to some 19.9 million, generating 1 trillion baht worth of income.

As the baht continues to edge up against major currencies, including the yuan, it has curbed arrivals from mainland China, with the number of visitors contracting by 3% year-on-year during the January-June period.

International arrivals coming in groups and received by members of the Association of Thai Travel Agents fell by nearly 12% to 2.3 million visitors in the first half.

The China market, which controls as much as 70% of Atta's total clients, plunged 15% to 1.62 million visitors.

The decline was evident regardless of the waiver of the 2,000-baht visa-on-arrival fee given to China and 20 other countries since mid-November of last year.

Kasikorn Research Center cautioned that if the baht's value continues to surge amid sluggish global economic growth, this will deter tourists' travel plans, especially for those who come in groups or for families with a limited budget.