Guy Ryder, director-general of the International Labour Organisation, speaks during an exclusive interview with the ‘Bangkok Post’. (Photo by Alisa Suwanrumpha)

One hundred years ago, Thailand was one of the founder members of the International Labour Organisation (ILO), a UN agency with a mandate to set labour standards, develop policies and devise programmes promoting decent work for all women and men.

Yet the kingdom has yet to ratify 66 ILO conventions, including the crucial ones allowing freedom of association (form unions) and collective bargaining. Only 2% of workers are union members in a country that a 2018 Credit Suisse report said is now the most unequal on earth, with 66.9% of the wealth held by 1% of the population.

You might expect ILO director-general Guy Ryder, who met Prime Minister Prayut Chan-o-cha and Labour Minister MR Chatu Mongol Sonakul during a visit to Thailand last week, to have had harsh words.

You would be wrong.

In an exclusive interview with the Bangkok Post, Mr Ryder revealed himself as the consummate diplomat, stressing the positives while gently but persistently addressing the negatives, while exhibiting an impressive grasp of facts and figures. A more extreme contrast with the brash bluster of Britain's new prime minister Boris Johnson is hard to imagine.

Mr Ryder was keen to congratulate Thailand on its launch of the Decent Work Country Programme in April and on being the first Asian country to ratify two ILO conventions: one promising protection to the victims of forced labour and sanctions for the perpetrators last year, and the Work in Fishing Convention this year. In January the EU lifted its yellow card warning on illegal, unreported and unregistered (IUU) fishing. Some fishing vessel owners have called for enforcement to be relaxed, but after visiting a Port-In-Port-Out report centre in Samut Sakhon, he remained positive.

"The industry was very sceptical. They felt this was going to impose extra costs and competitive disadvantage. But in the conversations I've had today with the people running the programmes, they think this attitude is beginning to change, they think the industry is seeing the logic behind ratification.

"The message from the international markets is: unless there are acceptable conditions of work in fishing, acceptable sustainability procedures in place, the markets won't take fish and seafood from Thailand. The industry stands to lose a lot more money by trying to push these issues to one side, and much more to gain by simply embracing what are simply good international practices."

Mr Ryder was also appreciative of the country's efforts to combat human trafficking.

"In the fishing industry, people internationally were first alerted to problems in the fishing and seafood by well-publicised incidents of forced labour and child labour. That has now been addressed in a very effective way.

"We estimate there are 25 million forced labourers in the world. It's not unique to Thailand, although there is a concentration of these problems in this part of the world."

Debate is ongoing about how quickly to introduce the 400-baht minimum wage, a key election pledge of the Palang Pracharath Party. "Everyone has been asking me about this since I've been in Thailand -- the prime minister, the minister of labour, employers, trade unions -- so it's clearly an issue that's at the top of the policy agenda.

"The minimum wage is particularly important where other modes of for determining wages is weak. If you have no effective collective bargaining channels open, then intervention for a decent minimum wage becomes all the more important.''

It was the on issue of organised labour that Mr Ryder was most critical, although his tone never rose above diplomatic.

"The rate of unionisation in Thailand is around 2%, you have only about 600 000 organised workers. Inequalities at work, inability to have a fair share of growth and prosperity, are societal problems. Thailand has not ratified the two key conventions -- the right to organise and the collective bargaining convention. We have been urging the government to seriously consider ratification for a very long time -- a matter of decades. The new government should give very serious consideration to this." 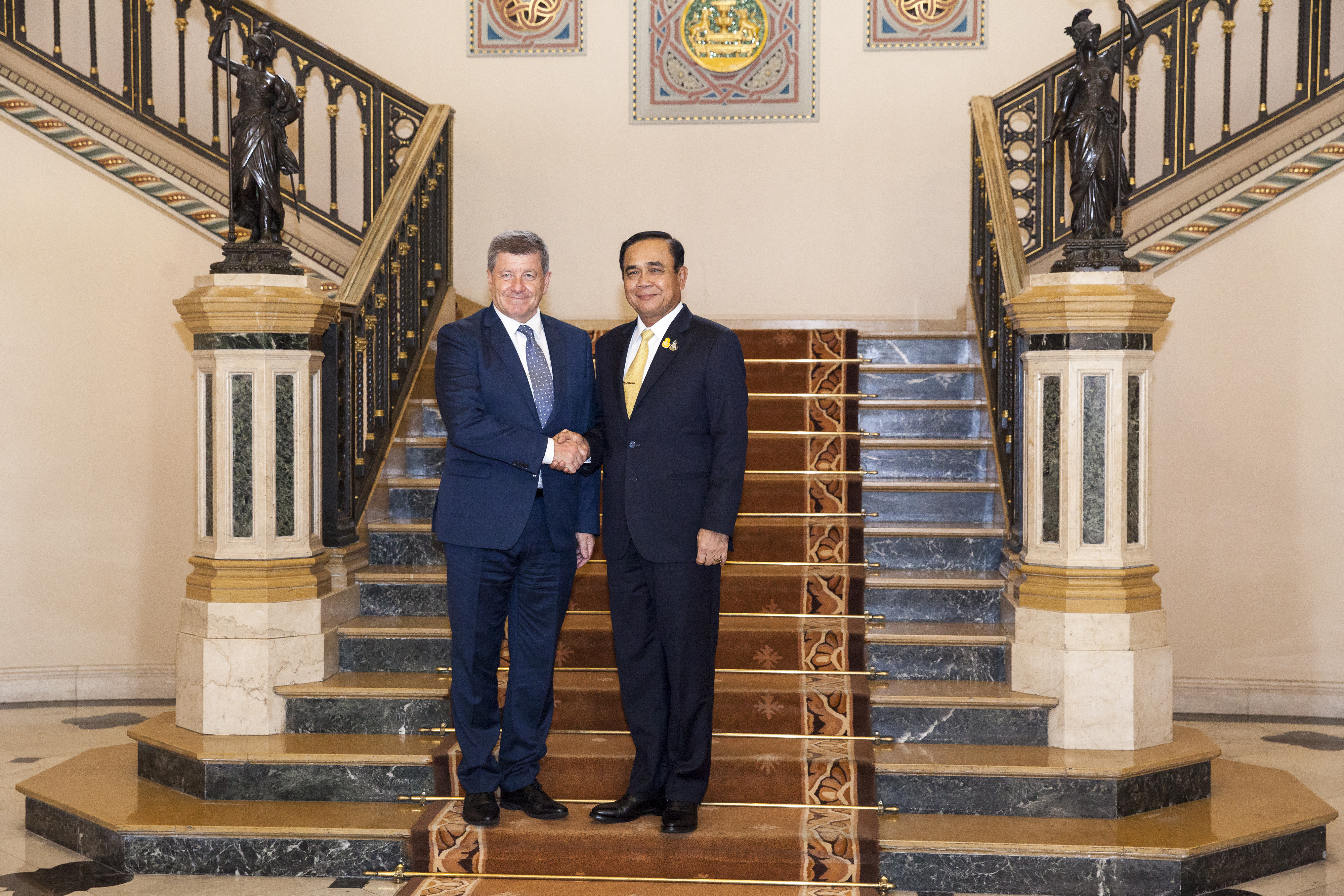 Mr Ryder was also keen to stress the importance of improving the lot of female workers. "One hundred years after the ILO proclaimed the principle of equal pay for work of equal value the gender pay gap around the world still averages about 20%. That's despite equality legislation in almost every country in the world. So what's gone wrong? Why aren't we breaking through?

"We have to dig out the hidden structural obstacles to equality. They are to be found in the lack of facilities for women, for example, proper care facilities.

On March 8, International Women's Day, the Women Workers' Unity Group demanded the ratification of Convention No 183, which calls for 14 weeks of maternity leave and cash benefit.

"This maternity convention is a particularly important one. Women take on the primary burden for family responsibilities. Care for children, care for older relatives. They work a lot more than men, in the house or at work, yet they're paid so much less. We regard the professionalisation and the monetisation of the care economy, the alleviation of women's unfair double burden at work, as key."

Increasing the skills of the female workforce is one of the ILO's ongoing projects in Thailand -- Women in STEM (science, technology, engineering and mathematics). Overall, the ILO estimates that over 17 million jobs -- 44% of the total -- face the risk of automation in Thailand.

"We have to embrace technological innovation as something positive, but we have to manage it. We certainly can't turn our backs on it. One of the things the ILO is focusing on is how to help countries put in place systems for lifelong learning, the renewal of skills throughout working life, because it's clear the current pace of change in labour markets means the skills we acquire at the beginning of one's working life -- their half life will be much shorter than one's working life.

Asked how Thailand could actually accomplish this, Mr Ryder cited other countries.

"France is looking at individual accounts, whereby each worker will be entitled to retraining and have a personal financial account they can draw upon to retrain throughout working lives. the individual will control that account, but it is financed by the state or by the employer. Other countries, Sweden is a good example, they have payroll taxes to create a fund to be used for retraining when workers are displaced.

"This is one of the most crucial debates."

Thailand is highly unlikely to ratify the outstanding ILO conventions any time soon -- they're perceived as too expensive and in some cases threaten entrenched interests. But Mr Ryder seems like a master of the long-term political gamesmanship required. He's a patient but persistent man.

"Seldom does the ILO act most effectively when we come and wag our finger at a country. What we have to do is stretch out our hand.

"If these things are taken as impositions from an international community that is hostile to national interests, they will quickly run into political obstacles. I want Thailand to view the ILO as a friend, as an ally, in pursuing shared objectives which ultimately help Thailand's growth and wellbeing."