Phuket, the popular tourism destination in southern Thailand, is struggling against a host of unfavourable factors that could weaken its tourism revenue and its long-term reputation as the Pearl of the Andaman.

Hotel room rates in the province dropped significantly in the first half of this year, leading revenue per available room (RevPar) to plummet. The situation shows no signs of improving, at least over the next few years, when 15,348 new hotel rooms will be added to existing supply.

Furthermore, tourism on the island is still haunted by the deadly boat accident last year that led to a drop in the number of Chinese tourists.

Phuket's hotel room rates are likely to face the darkest cloud in the rainy season after the second quarter showed signs of a gloomy outlook. Average room rates for the first six months this year dropped 5% compared with the same period last year, according to the Thai Hotels Association (THA).

From April to June, the rates slid further by 8%, worse than expected as the Songkran holidays did not bring a respite to the province.

According to C9 Hotelworks, a Phuket-based hospitality and property consultancy, RevPAR, a performance metric in the hotel industry, in Phuket declined by 12% from January to May.

Suksit Suvunditkul, chief executive of Deevana Hotels and Resorts and vice-president of the THA's southern chapter, said the first half of the year saw the hotel room rate plunge to its lowest on record. The poor showing stemmed from weaker occupancy, which prompted hoteliers to use a price strategy to draw back guests.

Things started to go awry for the resort destination after the Phoenix boat capsizing that claimed 47 Chinese lives in July 2018.

The Chinese market fell dramatically before seeing a small recovery in the high season after a string of efforts to remedy the effect. During the first half of this year, 5.6 million Chinese visited Thailand, down 4.7% year-on-year.

Average occupancy for the second quarter stood at 65%, an extraordinary low for the destination, as the Chinese market fell 70% from the same period last year.

In addition to safety concerns harming the reputation of Phuket, the effects of the economic downturn in China, the trade war with the US and the depreciation of the yuan, plus the stronger baht, have dented Thailand's appeal.

While there was a dip in Chinese travellers, who tend to favour closer and cheaper destinations, other markets in East Asia saw double-digit growth. Japan boasted an 11.7% increase and Taiwan a more than 60% rise in May.

Hotel oversupply on the island is a key concern. There are 93,941 hotel rooms available around the island, excluding villas and hostels. As long as supply grows faster than demand, it will be hard to raise the daily rates to a reasonable level.

According to Bill Barnett, managing director of C9 Hotelworks, more than 15,000 new keys will come on the market within the next five years. The surge in room numbers is not only hurting the revenue of hotel operators, he said, but also causing damage to natural resources.

Mr Barnett said RevPar in Phuket has fallen dramatically because of the lower occupancy rate, providing a lesson on depending too much on one particular market. Many hotels are reeling from the declining Chinese market, and emerging markets like India cannot immediately replace China, which is one of the top five markets for Phuket.

The competitive rates that hoteliers in Phuket have offered since the beginning of this year aim to attract Indian tourists, banking on the expansion of low-cost carriers such as GoAir, which launched the first scheduled direct flight from two destinations in India, and IndiGo, which offers direct flights from Delhi.

The Tourism and Sports Ministry also reported a 24.1% increase in the Indian market to 978,785 travellers in the first six months, thanks to the school break in May and June that stimulated the family segment. 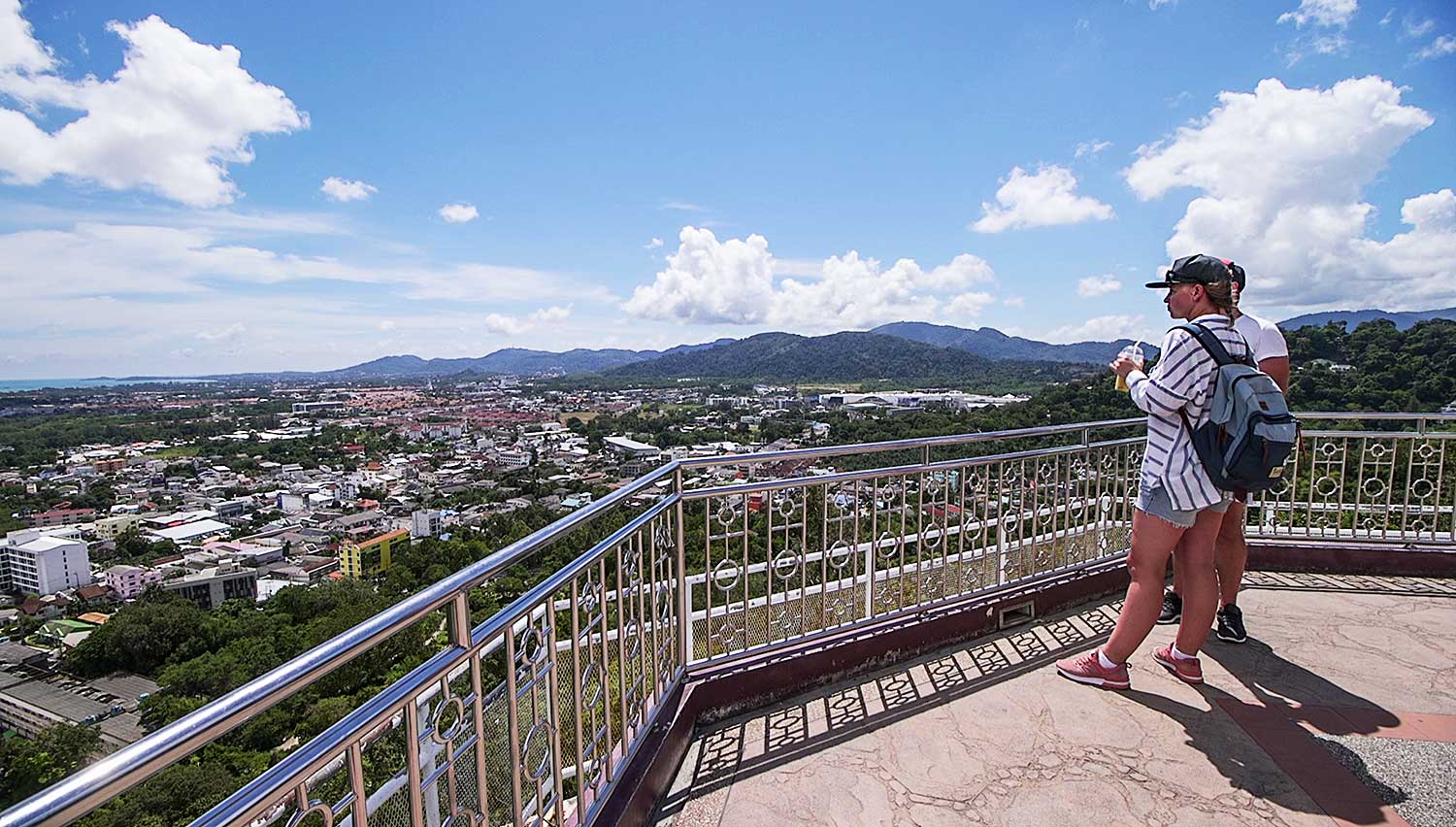 Phuket is facing an oversupply of hotels. (Photo by Chairity Yonpiam)

Despite the impressive surge in Indian tourists, their overall numbers still lag behind those of their Chinese counterparts, so hotels and accommodations in Phuket have lowered daily room rates in the initial stage to build up Indian customers' recognition and keep the momentum in the long run.

"Room rates offered to the Indian market are not as high as for the Chinese market because the portion is still small and we're in the competitive stage across all segments, especially in June when the average room rate dropped 18%," Mr Suksit said.

"Guests can stay at five-star hotels for only 3,000 baht," he said. "We also expect a stagnant room rate for the rainy season in the third quarter before the situation improves during the high season at the end of the year."

Aswin Yangkirativorn, chief executive of Thai Lion Air (TLA), said Thai airlines fully operate under the bilateral agreement quota, but there is plenty of room for Indian carriers to expand; thus it's the right time to seize the opportunities from international rivals.

"Six Phuket routes that link with China have suffered since the second half of 2018," he said. "Cabin factor dived to its lowest at 69-70%, but we hope the situation will improve by the end of this year."

In the first six months of 2019, performance regained momentum to reach a 77-78% load factor.

TLA is pinning hopes on the family segment to boost the market during the school break in July and August. Despite steering past the lowest point, forward booking tends to show up slower than before, making it harder to predict the Chinese market.

After international arrivals in Phuket declined by 1.8% in the first half, one remaining positive sign for the Tourism Authority of Thailand (TAT) is that overall revenue in the period still rose by 3.1% to 200.2 billion baht.

Expenditure on hotel rooms may not be as strong as before. But the growth of independent travellers, with the Chinese now making up 60%, has helped to distribute money to other service sectors such as restaurants, spas and theme parks in the province. 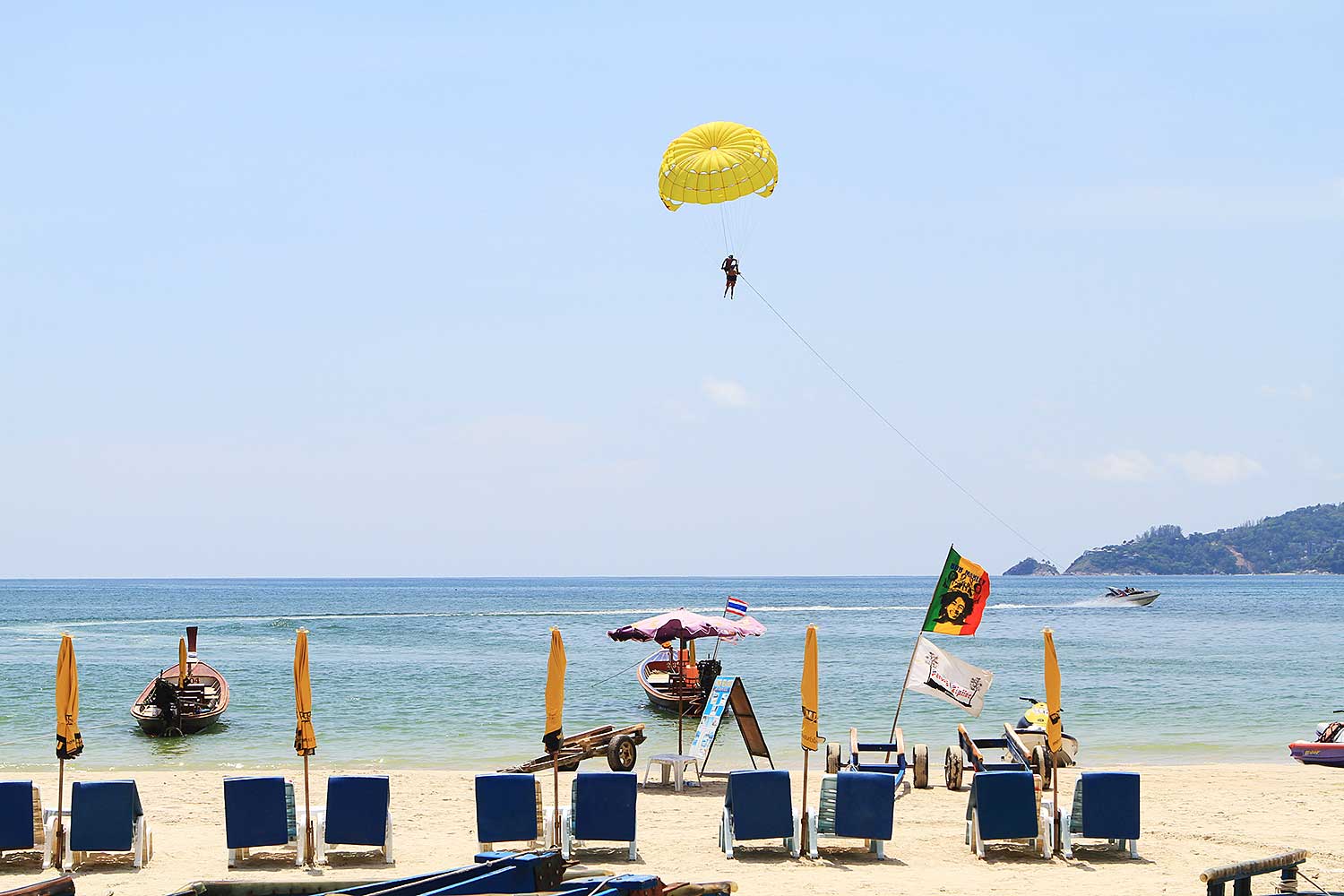 "This year, the TAT has set a growth target of 12% in tourism revenue from the international market," said Kanokkittika Kritwutikon, director of the TAT's Phuket office. "Although in terms of number it's still a challenge, the more reliable target we must preserve is at least a 2-3% increase in revenue, the same as in the first half."

In order to achieve that goal, the TAT must partner with other authorities to tackle serious problems pulling down spending, especially the amount of hotel supply that has grown rapidly in recent years.

Another key is increasing available slots for airlines. The TAT is ready to talk with Airports of Thailand about launching new international routes to Phuket, focusing on India and neighbouring countries in Southeast Asia.

For the promotion side, the TAT will turn to the qualitative spending segment, targeting travellers who are concerned about the environment. This project is driven by cooperation with the private sector, which is spearheading introduction of sustainable tourism to the targeted market.

One of the efforts to create awareness of Phuket as a sustainable destination is the Phuket Hotels for Islands Sustaining Tourism 2019 conference, slated for Sept 23 at the Hilton Phuket Arcadia Resort & Spa.