Fanning the flames of fear
Business

Fanning the flames of fear

The global economic context is becoming riskier, especially for Thailand

The recent yuan softening and monetary policy easing by regional central banks are the latest moves stoking fears of an emerging currency war, with Thailand positioned in the middle of the crossfire.

Quantitative easing, a practice to increase money supply in an economy via large-scale asset purchases, and interest rate reductions by major central banks in developed economies were used as a response in the wake of the US subprime financial crisis that started in 2007, then used again during the 2008 global economic crisis.

The yuan's weakening against the US dollar on Aug 5 sparked fears that the Sino-US trade war would evolve into a full-blown currency war, resembling the global monetary easing trend used to rev up economic growth over a decade ago.

The yuan fell below the 7-per-dollar mark for the first time in more than a decade, leading US President Donald Trump to officially accuse Beijing of being a "currency manipulator".

While China's central bank was quick to deny the accusations, the label could pave the way to possible sanctions against China. The last time the US put China on the currency blacklist was in 1994.

"Global central banks are expected to embark on further monetary policy easing to shore up economic growth and make exports more competitive, but the global economy will collapse if the currency war is protracted," said independent academic Somchai Phagaphasvivat. 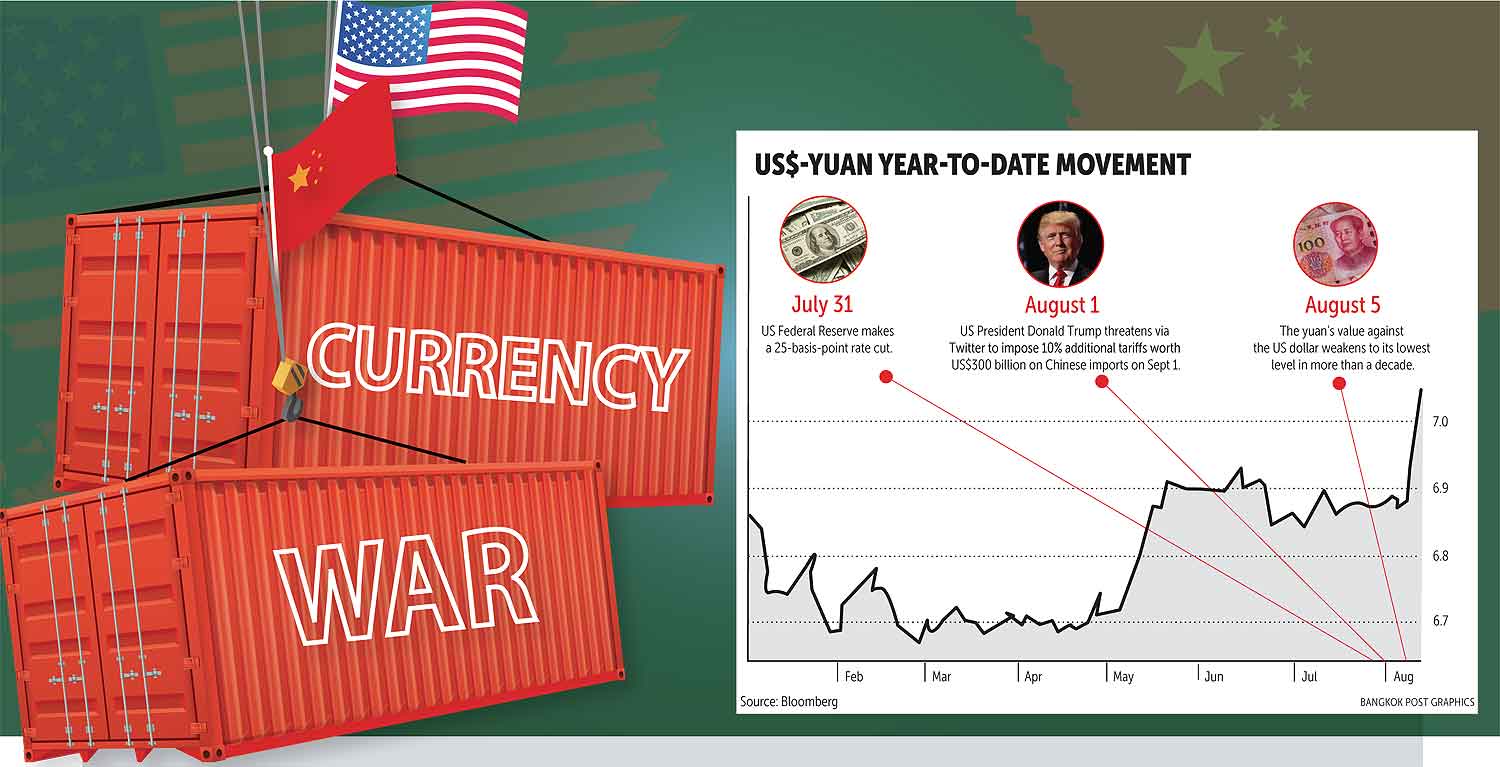 WHO HAS THE EDGE?

With the tit-for-tat tariffs by both China and the US and no signs of backing down, the Sino-US trade war is full of depressing repercussions.

Total US tariffs applied to Chinese goods are worth US$250 billion, while total Chinese tariffs on US imports are valued at $110 billion.

Despite sporadic truces between the two largest economies, Mr Trump's latest threat of imposing a fresh 10% tariff on a further $300 billion in Chinese goods, possibly on Sept 1, is chasing away hopes of an end to the trade dispute.

As tariffs begin to pile up, global trade and economic growth have been experiencing a slowdown and the International Monetary Fund now forecasts global GDP growth of 3.2% in 2019, down from 3.3%.

The US had already stepped up tariff impositions with sanctions against Chinese tech giant Huawei over national security concerns. What transpires next remains a mystery, and opinions are divided over which country has an edge over the other.

In Mr Somchai's view, the US has an edge over China because higher US tariffs could squash China's annual GDP growth to below 6%, a rate that Beijing cannot afford with its massive population.

China is also expected to shun selling the dollar and its holdings of US treasury bills, which would have the drawback of devaluing foreign reserves, he said.

Added to the ongoing feud with the US, the prolonged protests in Hong Kong are pressuring Chinese authorities. Such domestic problems risk instability going forward, Mr Somchai said.

On the other hand, Jitipol Puksamatanan, chief markets strategist at Krungthai Bank, suggests that China has the upper hand in terms of fiscal and monetary policies.

China's central bank has far more room for monetary easing compared with the US Federal Reserve, while fiscal stimulus from China is superior to Washington's as the US continues to face the yearly spectre of a federal government shutdown, Mr Jitipol said.

The recent impasse was brought about by Mr Trump's demand for $5.7 billion in federal funds for the US-Mexico border wall.

In any case, the yuan's value is poised to fall further going forward on a gradual basis because the move is being used to offset the impact from US tariffs, Mr Jitipol said.

"The trade war will not come to an end easily," he said. "It could linger into next year." 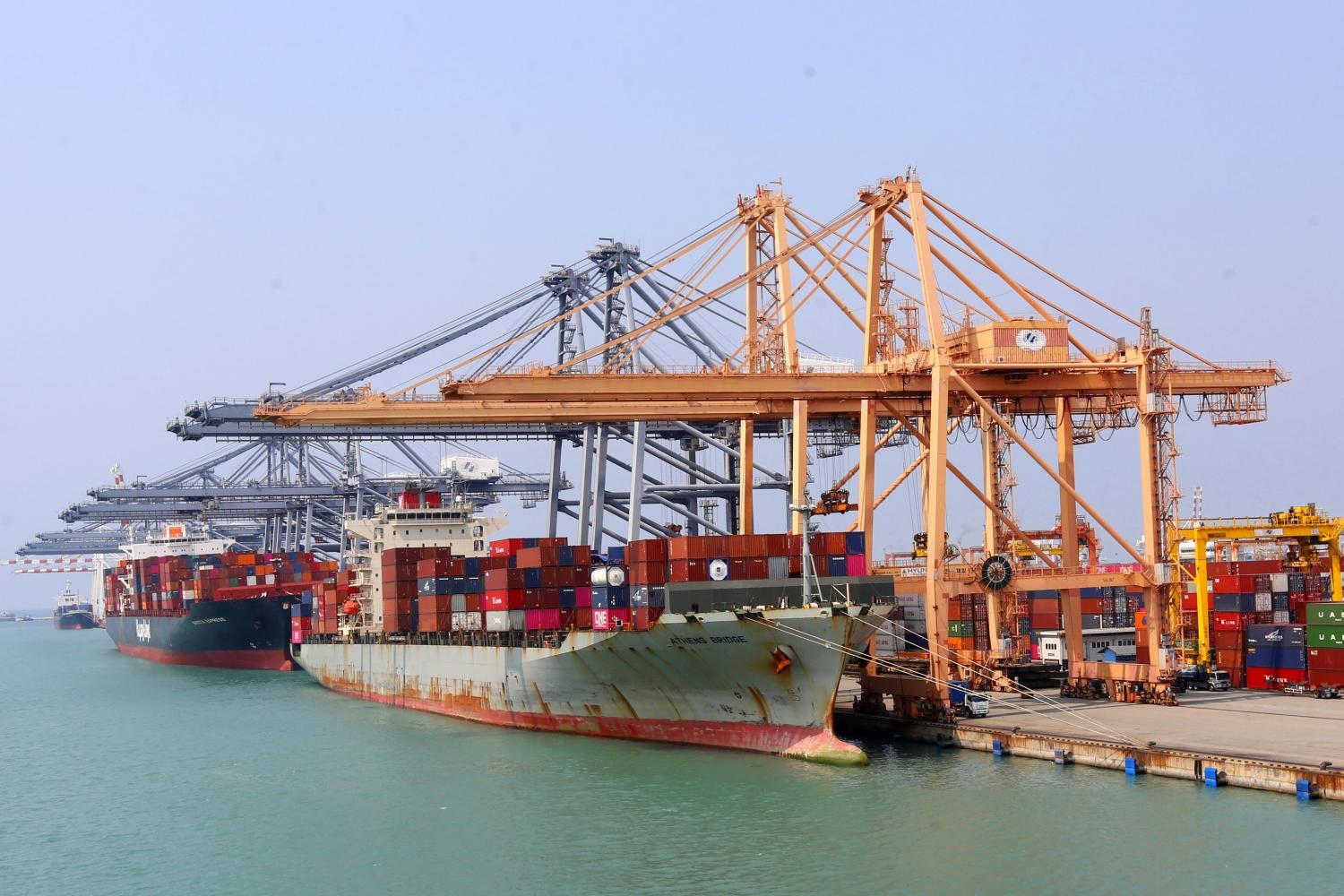 The baht has cemented its status as Asia's best-performing currency on a year-to-date basis, up nearly 6% as of Friday.

Although currency appreciation is good news for importers, the strengthening local currency has caused jitters among exporters and the tourism sector, with exports accounting for about 70% of Thailand's GDP.

For the first six months of the year, overall shipments were down 2.9% from the same period last year to $113 billion. The trade surplus for the period amounted to $3.94 billion.

In a surprise move, the Bank of Thailand's Monetary Policy Committee (MPC) last Wednesday opted to cut the policy interest rate by 25 basis points to 1.50% to shore up economic growth momentum amid intensifying Sino-US trade tensions.

Since the last rate hike in December 2018 -- the first since 2011 -- the MPC had left the policy rate unchanged, saying monetary policy remained accommodative.

The recent rate cut by the US Federal Reserve fanned a trend of global monetary policy easing, with the central banks of India and New Zealand following suit last week.

"The Bank of Thailand will closely monitor developments of exchange rates and capital flows, as well the necessity of additional measures to manage the local currency," said MPC secretary Titanun Mallikamas.

The MPC's policy rate cut by a quarter point last week was not based on direct baht management, he said. However, monetary policy is closely relates to foreign exchange movements.

While several countries have embarked on monetary policy easing, the MPC considered the domestic economy in the policy rate decision, based on a data-dependent approach, Mr Titanun said.

"Theoretically, the Bank of Thailand could lower its policy interest rate by more than 50 basis points, but such a move is not expected to be implemented," Mr Jitipol said.

The current rate is only 25 basis points higher than the Bank of Thailand's record low of 1.25% during the 2009 global financial crisis.

Apart from a rate cut, other measures that the central bank could use to curb the baht's appreciation are foreign exchange interventions, a withholding tax on offshore capital inflows and a modified policy interest rate, in the vein of approaches taken by the central banks of Europe and Japan, Mr Jitipol said. 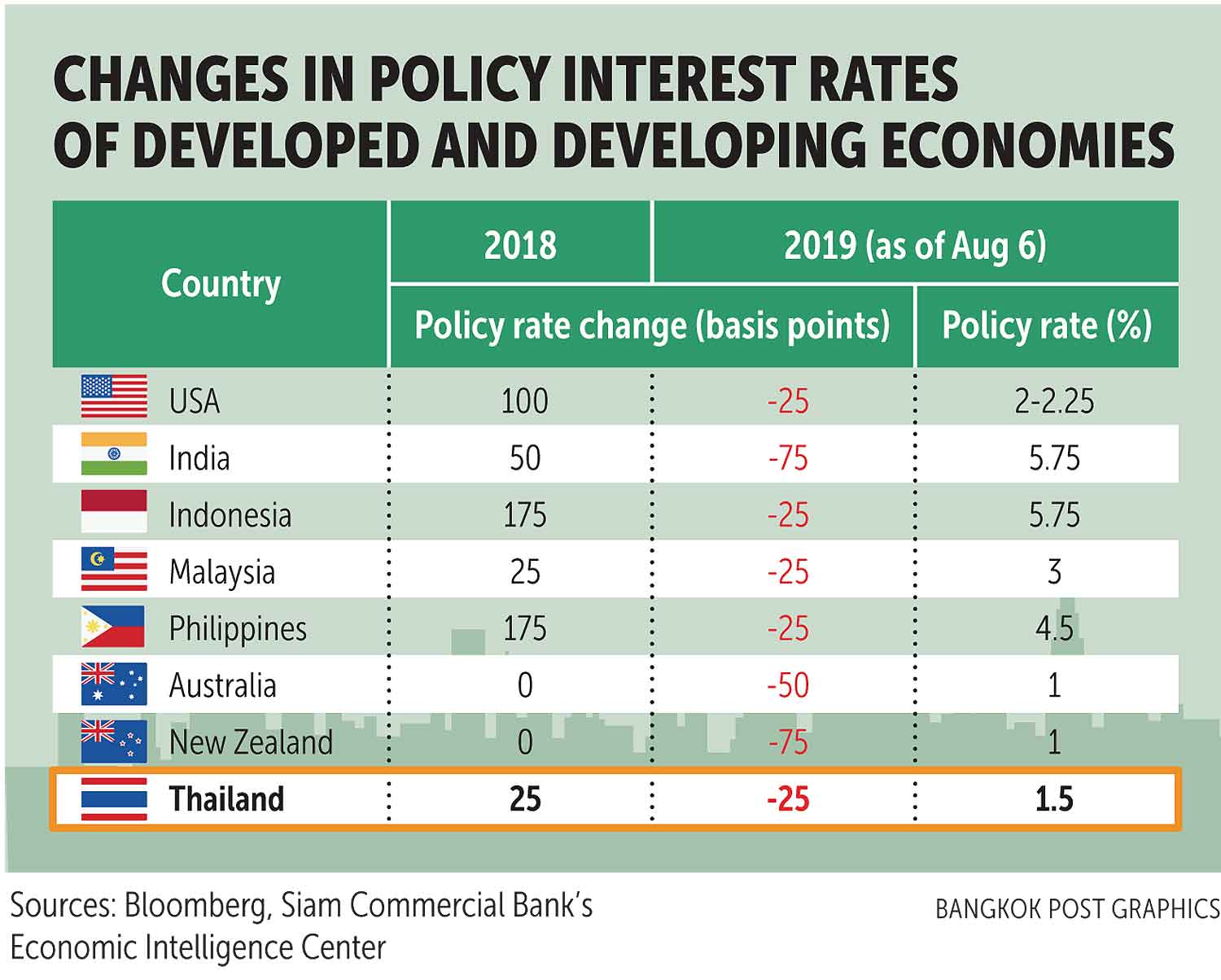 Thailand's economy is standing at a junction, enduring the backlash as economic titans feud, but the country could stand a chance to grab an opportunity amid the hostile trade backdrop.

The Board of Investment (BoI) is studying a "tailor-made investment policy" to entice foreign investors, according to Deputy Prime Minister Somkid Jatusripitak.

The BoI is also setting up a special team to lure companies looking to relocate from China to Asean countries.

"Existing measures to promote foreign investment by the BoI are less competitive compared with those offered by other countries," Mr Somkid said.

The BoI offers a corporate income tax exemption for 3-8 years and a reduction of import duties on machinery.

The Finance Ministry also has the authority to offer a corporate income tax exemption for up to 13 years on projects that the government aims to promote.

While Thailand stands to lose export competitiveness from the trade war and volatile foreign exchange, Southeast Asia as a whole, by contrast, could become a new destination for foreign investors to move their production facilities from China, said Kriangkrai Tiannukul, vice-chairman of the Federation of Thailand Industries.