Government raked in only B23bn from digital TV licensees
Business

Government raked in only B23bn from digital TV licensees

The state has earned slightly less than half of the 51 billion baht it is due after holding an auction for 24 digital TV licences in 2013.

The state has earned slightly less than half of the 51 billion baht it is due after holding an auction for 24 digital TV licences in 2013, mainly because of a series of assistance and subsidies from the government, says the National Broadcasting and Telecommunications Commission (NBTC).

The original 51 billion baht has been diluted by aid for digital TV channels, especially Section 44 invoked by the government in April to waive the remaining licence payment worth 13 billion baht, remaining rental fee of the broadcasting network at a cost of 13 billion baht, as well as costs of the operation in connection with the must-carry rule, worth 2 billion baht.

"This is not a failure of the digital TV licence auction in 2013 because the broadcasting business has changed rapidly thanks to digital disruption driven by over-the-top [OTT] platforms. No one realised this trend at that time," said Mr Takorn.

The licensees are obliged to air TV programmes via digital terrestrial TV technology.

"Even though the digital TV channels realised the changing trend and the need to shift their business models in the face of other innovative platforms, they need to shoulder the burden from their licence terms regarding payment and operation," said Mr Takorn. "This was a major problem."

TV industries in many other countries are encountering the same fate and foreign governments also gave assistance to these operators, he said.

Section 44 also included assistance to TV channels that needed to exit the sector.

Seven digital TV channels through six operators submitted letters of intent to exit the sector to the NBTC on the May 10 submission deadline, in accordance with the government's assistance initiative under the Section 44 order. 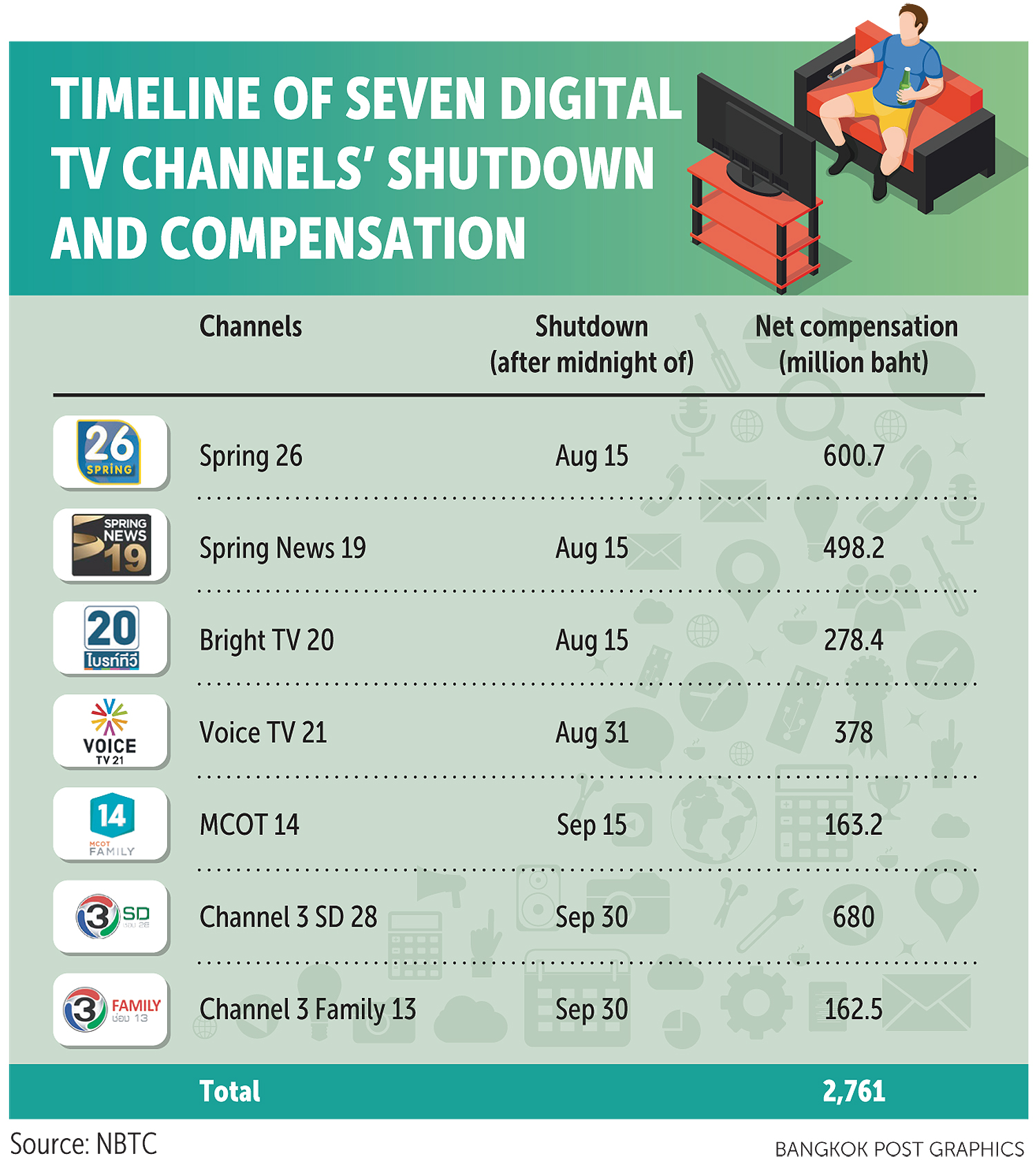 The seven TV channels will get compensation that will differ depending on the winning price of each licence auction and the exact date when they are allowed to go off air.

The compensation will mainly be in exchange for the spectrum the channels will return to the NBTC, for which they have already paid licensing fees up to 2029.

The net compensation for the seven channels is a combined 2.7 billion baht.

In related development, Mr Takorn said yesterday the first three channels will receive a combined compensation of 1.378 billion on Aug 16, the shutdown date of the three channels under the Section 44 assistance.

Spring 26 will receive 600 million baht in compensation, while Spring News 19 and Bright TV 20 will receive 498 million and 278.4 million, respectively.

Mr Takorn said the three channels have to sign agreements with the NBTC to ensure they must pass some of the assistance money to employees from the exit in line with labour laws.

If the seven TV channels fail to comply with the labour law requirement of paying compensation to affected employees, the NBTC may confiscate the bank guarantees they placed with the regulator since they were awarded licences, he said.

"The NBTC could provide compensation within 60 days after the shutdown date, but the NBTC decided to pay it as soon as possible or even on the shutdown date to help affected employees," said Mr Takorn.

Mr Takorn said another four channels will shut down and get compensation pending the NBTC's approval. 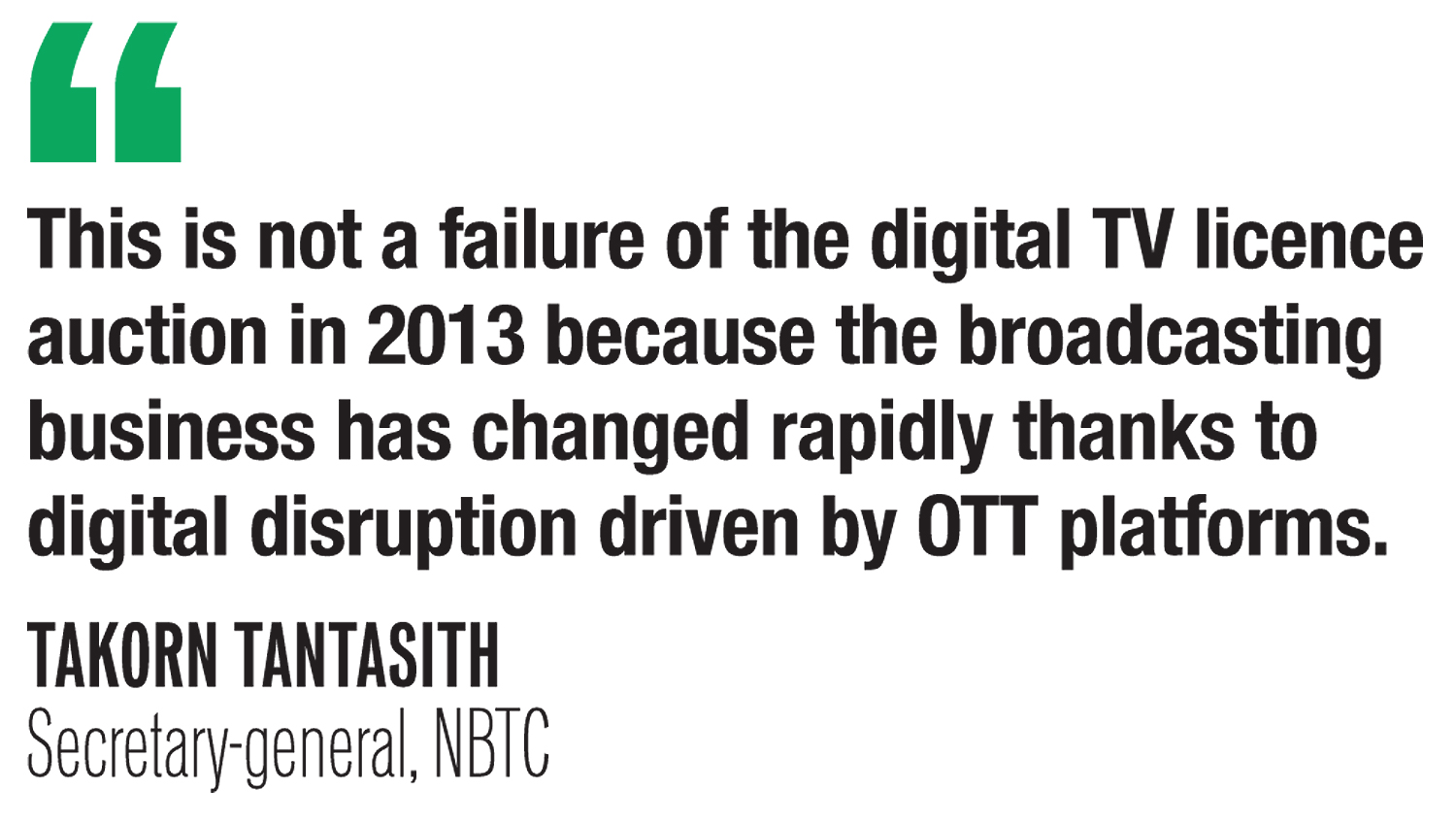