Digital TV operators will continue their financial struggles despite the closure of some channels due to stiff competition, the Economic Intelligence Unit (EIC) has predicted.

Three digital TV channels — Spring News, Spring 26 and Bright TV — went off the air on Friday after failing to attract sufficient ratings and advertising revenue. They received financial compensation of 1 billion baht in total from the National Broadcasting and Telecommunications Commission (NBTC) as they exited the airwaves. 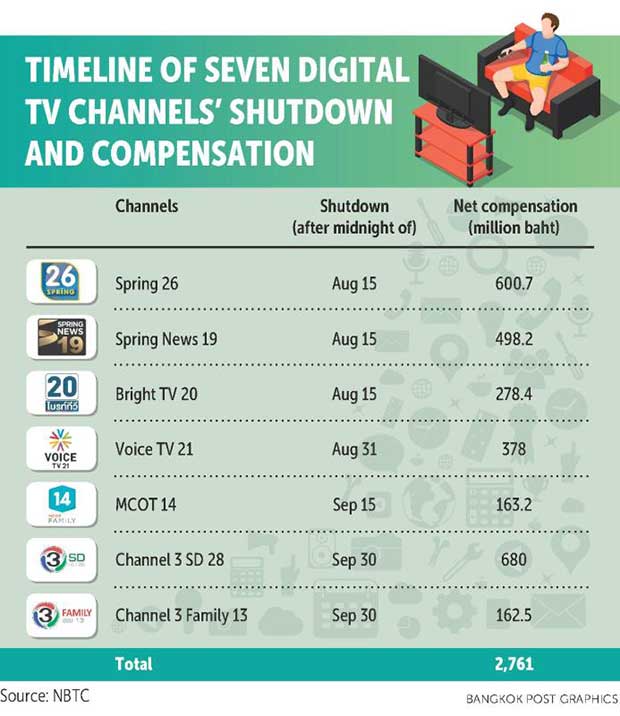 A total of 24 digital TV channels began broadcasting in 2014 after fierce competition for expensive licences were auctioned off in a medium that was tipped as the future of the industry. From Oct 1 this year, only 15 channels will remain after the departure of other loss-ridden operators.

The EIC still expects a bumpy road for the remaining broadcasters because the prevailing global and local economic uncertainty has prompted advertisers to rein in their budgets. Ad spending on digital TV stations is also declining in general, it added.

The three broadcasters who went black on Friday and four who will shut down later are not big players in the industry, the research house of Siam Commercial Bank Plc said.

"The return of the licences of seven channels will have little impact on the digital TV industry overall because they had a combined share of less than 5% of total ad revenue in the past five years," Kamonmarn Jaenglom, an analyst at the EIC, said in a research note.

The EIC assessment is in line with that of Media Intelligence, which expects a drop in TV ad spending this year and next year.

Spending on TV is projected to drop to 47.3 billion baht this year, down from 47.7 billion last year. A much  more significant drop — to 40.5 billion baht — is expected next year. 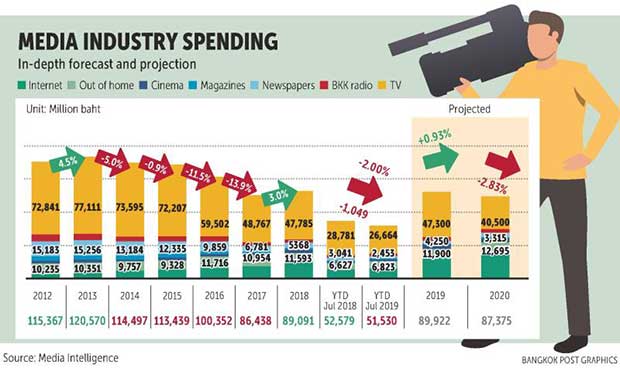 NBTC secretary-general Takorn Tantasith on Tuesday blamed the problems of digital TV stations on new technology that disrupted their operation.

"This is not a failure of the digitalTV licence auction in 2013 because the broadcasting business has changed rapidly thanks to digital disruption driven by over-the-top platforms. No one realised this trend at that time,” said Mr Takorn.

SONGKHLA: A Cambodian woman was killed and 11 other migrant workers and the driver hurt when their passenger van rear-ended a parked water truck in Bang Klam district on Tuesday morning.

The Thai embassy in Tel Aviv has advised Thais to postpone planned trips to Israel after the health ministry there imposed a 14-day house quarantine on visitors from Thailand and three other countries.

Canada reportedly says 32 citizens aboard stricken Diamond Princess have tested positive for coronavirus; 1,868 dead, but most of 72,436 infections found 'mild'.