All eyes are on this week's meeting of the Asean Telecommunication Regulators' Council (ATRC) in Bangkok, watching for clues as to whether it will usher in joint guidelines that will get tough on over-the-top (OTT) operators, particularly where taxation is concerned.

OTT refers to digital applications or services operated over internet networks. The rise of OTT services, especially online video and TV content, is cause for concern over how to properly regulate them.

In the past few years, regulators worldwide have struggled to find suitable ways to handle OTT operators. But 2019 could be a turning point in which new approaches are attempted.

At the forefront of the movement is France, which recently passed a law to tax digital giants on revenue accrued within the country. The tax will snare several US tech firms, including Google, Apple, Facebook and Amazon.

France is the first major economy to approve such a law. The country has expressed confidence that the other G7 nations (Britain, Canada, Germany, Italy, Japan and the US) will reach a consensus on the issue. 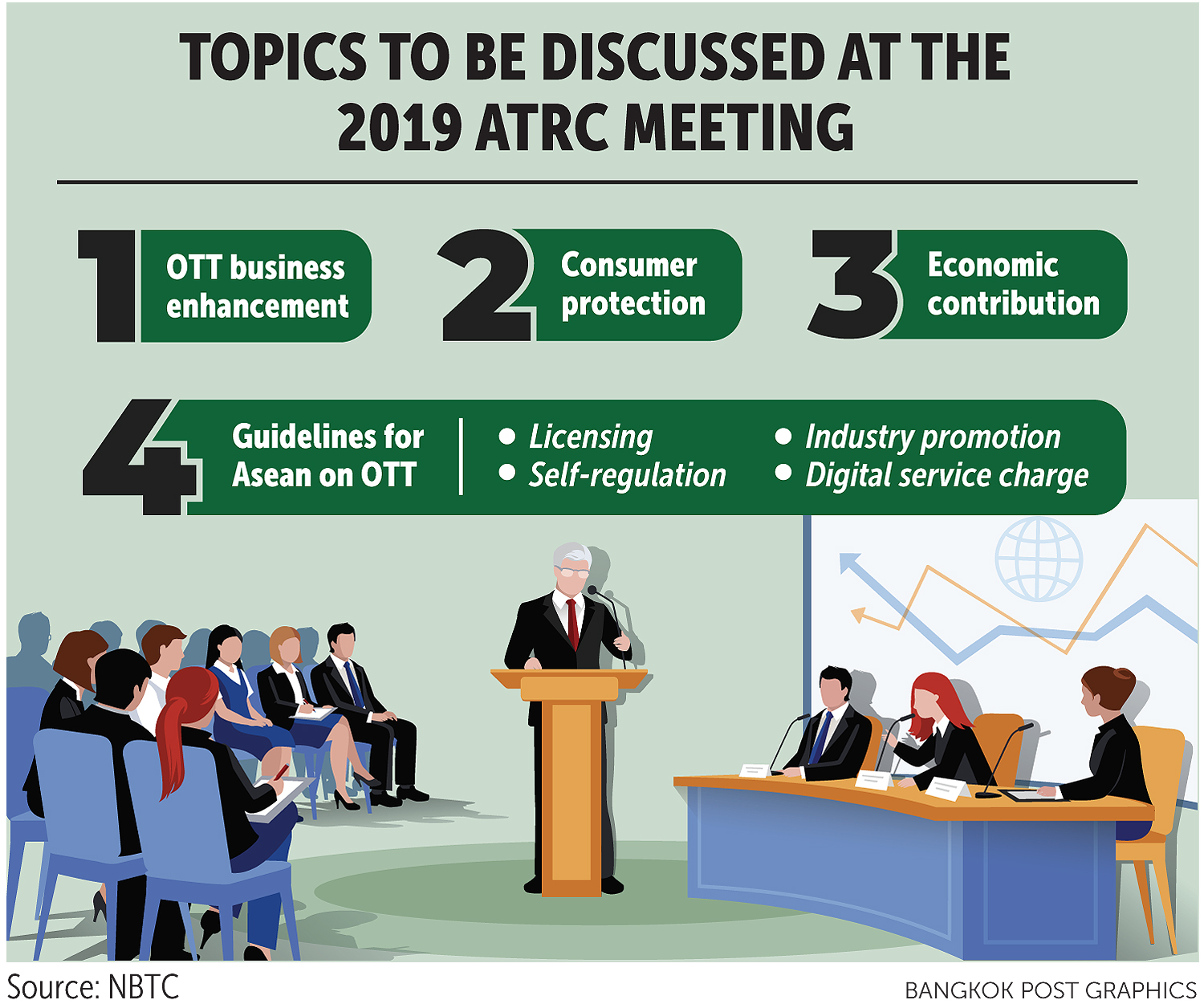 A high-ranking source at the NBTC said the meeting would be a good occasion for Asean members to raise proactive ideas on how to deal with the OTT industry.

"The first joint-statement guidelines for Asean on OTT could be rolled out," the source said, noting that it was too early to say when Asean members would actually tax OTT services.

Asean telecom regulators, OTT providers and network service operators will exchange views on issues at the meeting, which ends Friday.

The source said the OTT guidelines for Asean may comprise various key elements, including licensing, self-regulation, industry promotion and digital service charges. The guidelines would be Asean's first joint statement on OTT services.

Another NBTC source revealed that the agency is inviting representatives of the Excise Department to take part in the meeting as well, apparently to explore channels by which to tax OTT operators.

But concerns have been raised about how ISPs and IIG operators could gauge the actual volume of bandwidth usage by OTT operators.

Although the NBTC has no direct authority to lay out tax measures, it can work with other agencies to compel the OTT operators that have reaped benefits from the Thai market to enter the tax system, according to this source.

A source from an OTT operator said that any regulations to deal with OTT operators should come with multifaceted options and take into account the changing environment.

Nevertheless, they should bring about fairness and equality, the source said, adding that regulation-incurred costs shouldered by incumbent operators should be reduced and efforts should be made to treat OTT operators by the same standard.

The advantage of any regulations must be weighed against the impact on the public, the source said: "It is necessary that the regulations would not obstruct the opportunity to apply new technology developed to enhance our living standards."

Bunyati Kirdniyom, director for government affairs at Vriens & Partners, a Southeast Asia-focused corporate advisory firm, said the government must think carefully about collecting tax from OTT operators, as policymakers would apply a tax regime meant for conventional businesses to OTT operators, which use new business models.

Policymakers also need to clearly define which types of OTT business would be taxed. OTT businesses can range from those running free video-on-demand (VOD) services with advertisements to the operators who require subscription fees for VOD services without ads.

"How could they collect tax with a level playing field regarding cloud services and e-books?" Mr Bunyati said.

He noted that OTT operators are not only major foreign players, such as Google and Facebook, but also some local companies.

As for YouTube, users can make money, create jobs and become entrepreneurs who have to pay tax.

Policymakers should weigh the benefits of tax revenue against the risk that local operators will be put in jeopardy, Mr Bunyati said.

"Thailand should ensure ease of doing business along with political stability in a bid to encourage global tech firms to use the country as their innovation hub in the region, rather than merely opening offices for sales and marketing," he said.

Joint taxation of OTT players by Asean nations will be hard, he said, as the region's members still have different regulations.

According to the Digital Advertising Association, ad spending on OTT platforms reached 14 billion baht last year, up 21% from a year earlier. Facebook and YouTube were the major gainers. Ad spending via TV has dropped sharply since 2015.

The NBTC has tried to come up with a regulatory framework to regulate OTT operators and services since 2017, but the efforts have yet to bear fruit. Critics say the NBTC's regulatory draft failed to grasp the real business ecosystem of OTT.

The NBTC once pushed for registration of all OTT players engaged in broadcasting business; but the major operators, such as YouTube, Netflix and Facebook, simply ignored it. 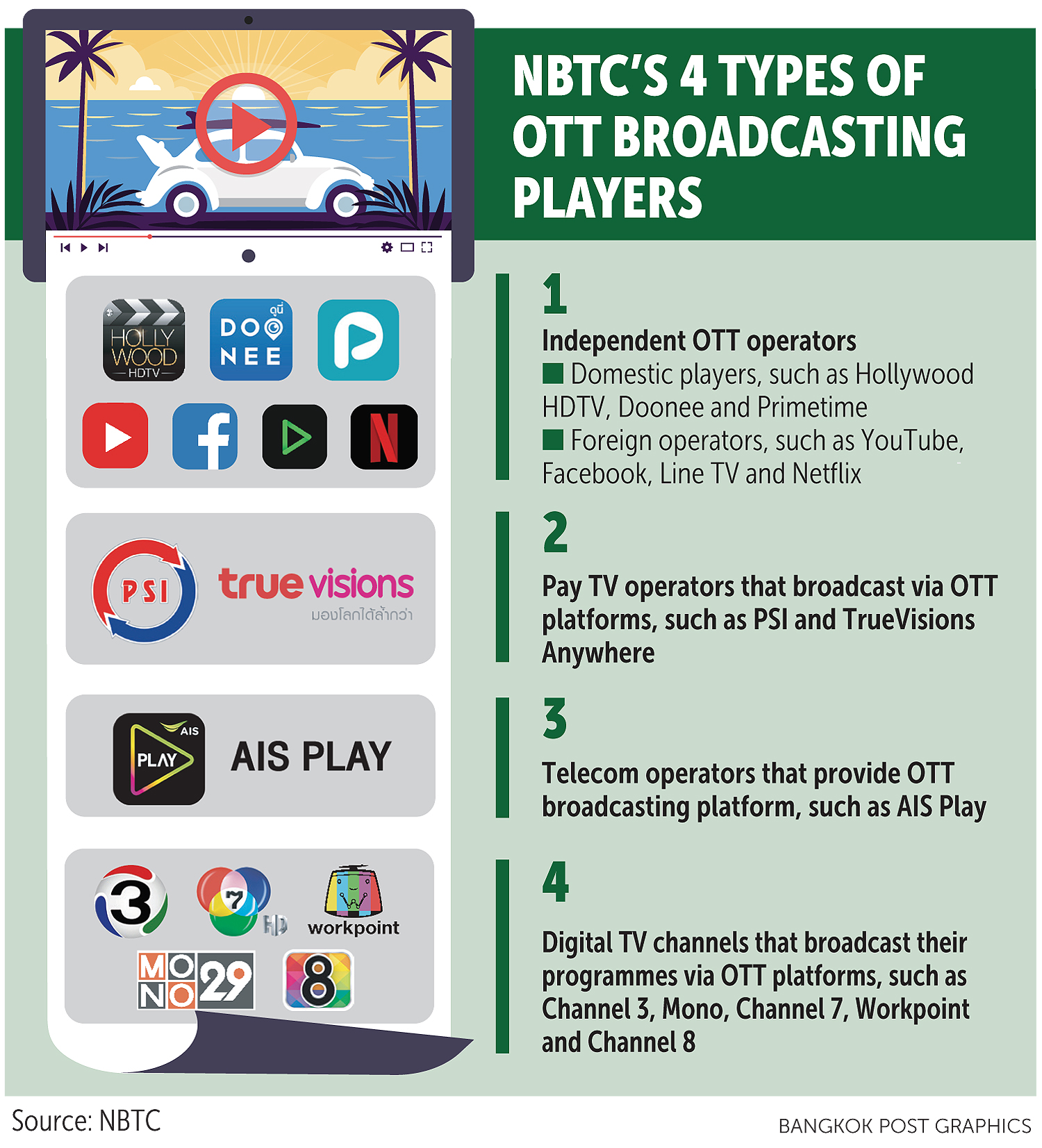 The meeting agreed to tighten coordination with the OTT industry, create a level playing field among industry players and ensure better access to technology.

In June 2018, the Malaysian Communications and Multimedia Commission hosted the ATRC OTT Dialogue in Kuala Lumpur. A wide range of pressing issues regarding OTT services were discussed.

The 24th ATRC meeting in Singapore in 2018 looked at two aspects of the OTT industry.

First was the economic aspect, ranging from competition and licensing to taxation. Second was the social aspect, including social harmony, consumer and privacy protection, and concerns about the spread of false information.

In the same year, the Telecommunications and Information Technology Ministers Meeting agreed to endorse the ATRC Stakeholders' Consultative Dialogue platform, whereby all stakeholders in the OTT industry, including regulators and players, were brought together to share their views on the industry.

This year, the Asean Multi-Stakeholder Dialogue was held in Singapore in May to discuss OTT services. The event, which was the first industry-led session, was a joint affair with the US-Asean Business Council.

Input from that meeting will be presented at this week's ATRC meeting for further discussion.