Thailand's slow economic growth in the second quarter has prompted the state planning unit to lower its forecast for 2019 growth to 2.7-3.2% from 3.3%-3.8% made in May. 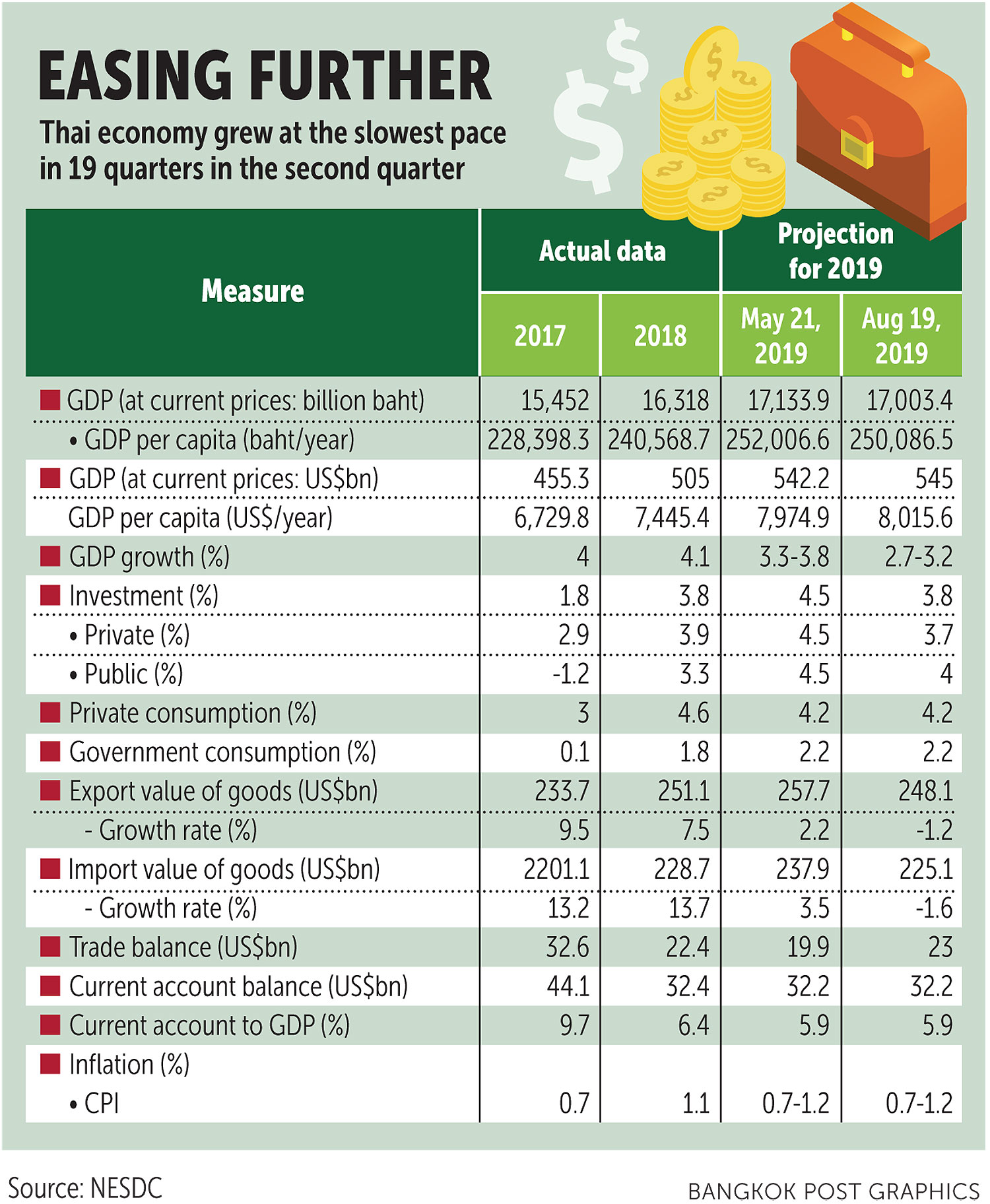 It also sharply cut its estimate for this year's exports to a contraction of 1.2% from 2.2% growth earlier.

Thosaporn Sirisamphand, secretary-general of the National Economic and Social Development Council (NESDC), said a slew of risk factors are still present in the latter half, notably the global economic slowdown and widespread drought.

The NESDC reported yesterday the economy rose 2.3% year-on-year in the second quarter, easing from 2.8% growth in the first quarter.

This was the slowest pace in 19 quarters since the third quarter of 2014.

After seasonal adjustment, the economy expanded by 0.6% in the second quarter compared with the previous three months.

For the first half of the year, the economy grew by 2.6% over the same period last year.

"A slowdown both domestically and abroad affected the quarter's growth," said Mr Thosaporn.

"The US-China trade war, global economic slowdown and drought remain risks, although a government stimulus package announced last week, as well as a potential investment from companies relocating from China amid the trade war, could help offset the damage," he said.

The Bank of Thailand's measures to curb auto loans and household debts, the drought, a delay in fiscal 2020 budget disbursement to January (from October), and worsening global trade are expected to continue to affect the economy.

However, he expects a rebound starting from late third quarter as the political situation has been improving, despite some noise, and stimulus measures to shore up domestic activity are likely to be implemented soon using the available budget for the current fiscal year.

The external sector (exports and tourism) should be supported by a low base, said Mr Tim.

Mr Tim said with the weaker figures, markets may look for another rate cut by the central bank in September after the surprise cut in August.

He expects the central bank to stay on hold for the rest of 2019, as further rate cuts amid an already accommodative stance are unlikely to boost the economy.

Don Nakornthab, the central bank's senior director of the economic and policy department, said the Monetary Policy Committee had already taken into account the lower economic growth in the second quarter than the previous three months and it was a factor that led to a surprise policy rate cut two weeks ago.

Domestic spending is expected to be the main driving force of the economy in the period ahead in light of the government's stimulus package, said Mr Don.

The central bank is scheduled to evaluate economic growth again in September, he said.

In June the Bank of Thailand cut its GDP growth forecast for 2019 to 3.3% from the 3.8% predicted three months earlier, and the payment-based exports forecast to zero growth from the 3% rise seen in March.

The economy is facing both internal and external uncertainties that warrant close monitoring, said Mr Don.

Those headwinds include trade tensions, monetary policy moves by central banks worldwide and continuity of fiscal budget disbursement and state policies, he said.

Stemming the flow: How Thai companies can retain great employees