Welfare cardholders queue up at a Krungthai Bank ATM to withdraw money provided by the government.  SURACHAI PIRAKSA

With the economy battered by external headwinds and domestic uncertainties, the latest stimulus package is touted as an elixir to prevent a spiral downward into a recession.

Thailand's annual GDP growth could well miss 3% this year: the Sino-US trade row has taken a toll on exports, a crucial element propelling the economy, and low farm income and high household debt are muting consumption and confidence at once.

With a mission to shore up consumers' ailing confidence, the second Prayut Chan-o-cha government has rolled out a stimulus package aimed at shoring up sentiment, especially for low-income earners, farmers and small businesses reeling from economic body blows.

The sustainability of populist measures is open to debate, but there are question marks about whether the latest fiscal injection is the right cure for dour economic conditions or simply a short-term boost to calm nerves before the storm. 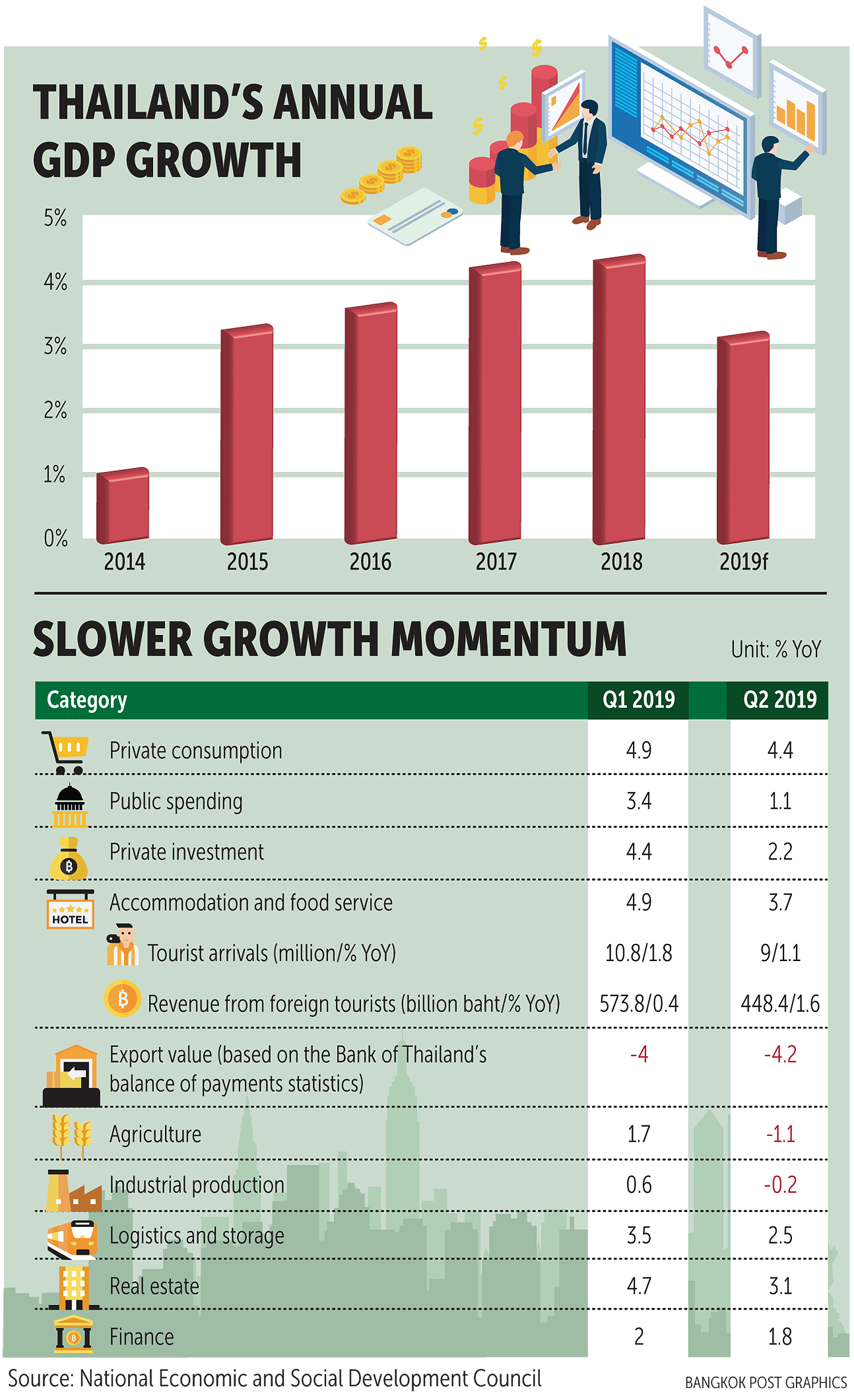 Second-quarter economic growth of 2.3% year-on-year was a moment of reckoning for the government, marking the slowest pace since the third quarter of 2014.

In an attempt to bolster the sluggish economy, the cabinet last Tuesday gave the green light to a 316-billion-baht stimulus package, which the government hopes will raise the country's economic growth by 0.5-0.6 percentage points this year.

Finance Minister Uttama Savanayana said the stimulus package consists of three groups of measures: additional allowances for low-income earners and the elderly; a debt suspension scheme for farmers affected by the drought crisis; and efforts to mitigate the impact of the global slowdown on the Thai economy.

Somprawin Manprasert, chief economist at Bank of Ayudhya, said fiscal stimulus is the right remedy to shore up the country's tepid economic growth because its transmission to the economy is more effective than monetary policy for short-term stimulus.

He said the stimulus package has three main objectives: propping up the Thai economy by lessening the financial burden of low-income earners and vulnerable groups; providing lending to SMEs reeling from sluggish exports and economic conditions; and stimulating those with purchasing power to spend.

"The stimulus sends a signal that the government stands ready to help the economy, helping to restore people's and investors' confidence," Mr Somprawin said.

The stimulus package will not lead to higher household debt, he said, as the cash handouts are restricted to spending on non-durable goods, which do not lead to borrowing.

"This is an appropriate time to implement a stimulus because there was a delay of four months after the general election in forming a new administration," said Kriangkrai Tiannukul, vice-chairman of the Federation of Thai Industries. "If the government did not offer such a stimulus, the country's sentiment would be worse."

But Nat, a 39-year-old freelancer, is sceptical, saying the stimulus spending is unlikely to trickle down to those in need, while the cash splurge is anticipated to be temporary.

"The latest measures do not address the root of the problems," Mr Nat said. "Better infrastructure is needed to attract investment and tourist arrivals."

Enduring problems such as lack of job creation, flooding and drought have not been addressed, he said.

"Debt restructuring and a reduction in utility and fuel expenses could leave people with more money to spend," Mr Nat said.

Hampered by the drought and low commodity prices, farmers and low-income earners are among the groups most exposed to financial hardships.

In an attempt to ease their plight, the Comptroller-General's Department will give additional allowances worth a combined 20 billion baht to state welfare smartcard holders via e-wallet by early September.

Some 14.6 million welfare recipients will receive an extra 500-baht monthly allowance during August to September; 5 million elderly who are welfare smartcard holders will get an extra 500-baht monthly allowance over the same period; and parents who are welfare recipients will receive 300 baht for each child for two months.

Prom Boonmachuay, agricultural committee chairman of Suphan Buri, said measures designed to help farmers are supportive, but the government should also look into offering debt restructuring and interest rate deductions for farmers who are not members of the Bank of Agriculture and Agricultural Cooperatives.

"Farmers have built up more debts over the last 4-5 years," Mr Prom said. "Government measures have not covered those who are not members of agricultural cooperatives."

Amonthep Chawla, head of research at CIMB Thai Bank, said the latest measures are tailored to ease the plight of farmers and low-income earners reeling from drought conditions and low crop prices.

"These are not stimulus measures, because low-income earners do not have sufficient purchasing power," Mr Amonthep said. "We will have to wait and see about their effectiveness, as the impact of similar measures implemented in the past was not clear."

Additional fiscal stimulus, expected to be unveiled in the fourth quarter, should be concentrated on addressing Thailand's structural economic problems and bolstering job creation through infrastructure projects rather than cash giveaways, he said.

The government has to look at its tax collection policy to address its running budget deficit, but an expansion of the tax base is better than a tax hike because the latter could stifle domestic consumption, Mr Amonthep said.

"Any personal income tax deduction has to be treated with caution because tax revenue is already low," he said. 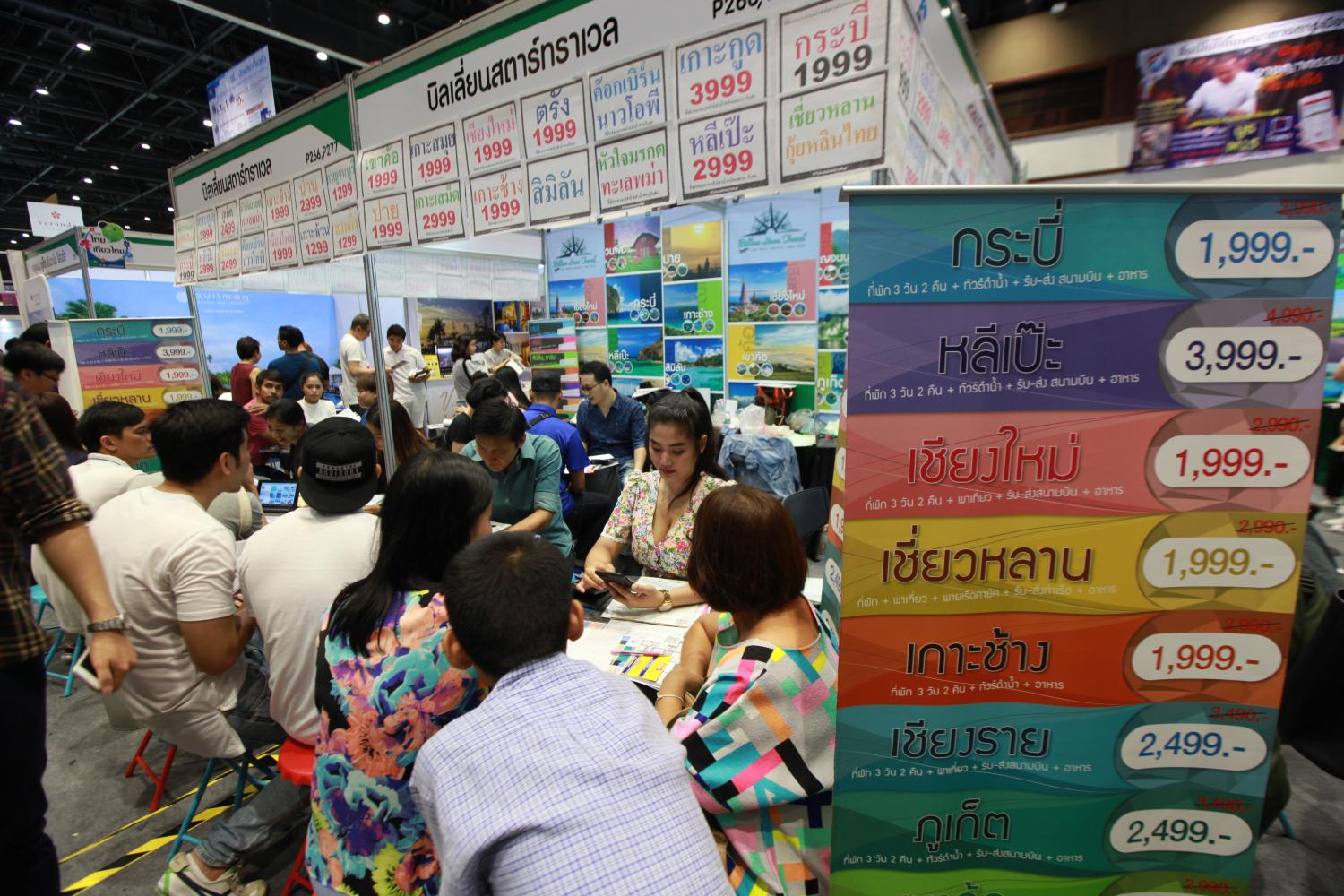 A 1,000-baht handout to travellers is meant to stimulate the domestic tourism industry. Phrakrit Juntawong

As the tourism industry has become an important engine driving economic growth, a gain in that sector of only 1.4% year-on-year in the first half meant that those working in tourism were struggling to generate sufficient revenue.

With a number of public holidays remaining this year, the government has devised a scheme to spur domestic travel among Thais.

A budget of 19-20 billion baht was initiated to fund the 1,000-baht giveaway for travel to destinations outside of home provinces, and there is a 15% cash rebate of up to 30,000 baht on tourism-related spending.

To be eligible for the 1,000-baht cash handout and rebate, Thais aged 18 and up are required to sign up at the Tourism Authority of Thailand's website from Sept 23 to Nov 15.

The tourism incentive is offered to 10 million people on a first-come, first-served basis. They are required to download the Pao Tang mobile app from Krungthai Bank to receive 1,000 baht and the rebate, paid by the government.

Recipients must travel within two weeks of obtaining the giveaway.

Unlike previous stimulus schemes, this time the cash handout of 1,000 baht is given electronically and is strictly for travel to tourism destinations outside of home provinces.

With the electronic payment, the government can track the items and where people are spending the money, preventing misuse of the handout.

Kasikorn Research Center expects the stimulus measure to help the tourism sector for the remainder of the year, increasing domestic travel to 172 million trips contributing 1.12 trillion baht worth of annual tourism revenue.

Yet the measure contains several restraints barring travellers from participating in the scheme, said Phuriwat Limthavornrat, president of the Association of Domestic Travel.

"The measure requires registrants to travel to specified provinces within two weeks after registering," he said. "I think this condition should be relaxed, allowing them to visit other provinces if plans change."

Anusorn Tamajai, dean of Rangsit University's economics faculty, said it's questionable whether the handout will go to people in small communities, as intended by the government.

Those poised to benefit from the measure will be hotels, restaurants and souvenir shops, he said.

This means people reeling from the economic slump may not be helped by the tourism stimulus.

There is no guarantee that registrants will travel to less-popular provinces as the government intends for income distribution purposes, Mr Anusorn said.

Uraiwan Ngentae, 45, said she and her siblings plan to sign up for the 1,000-baht handout even though they are still uncertain of whether they will have time to travel to designated provinces within two weeks, as required by the government.

"Cash handouts by the government seem to be a normal global practice for short-term stimulus," she said. 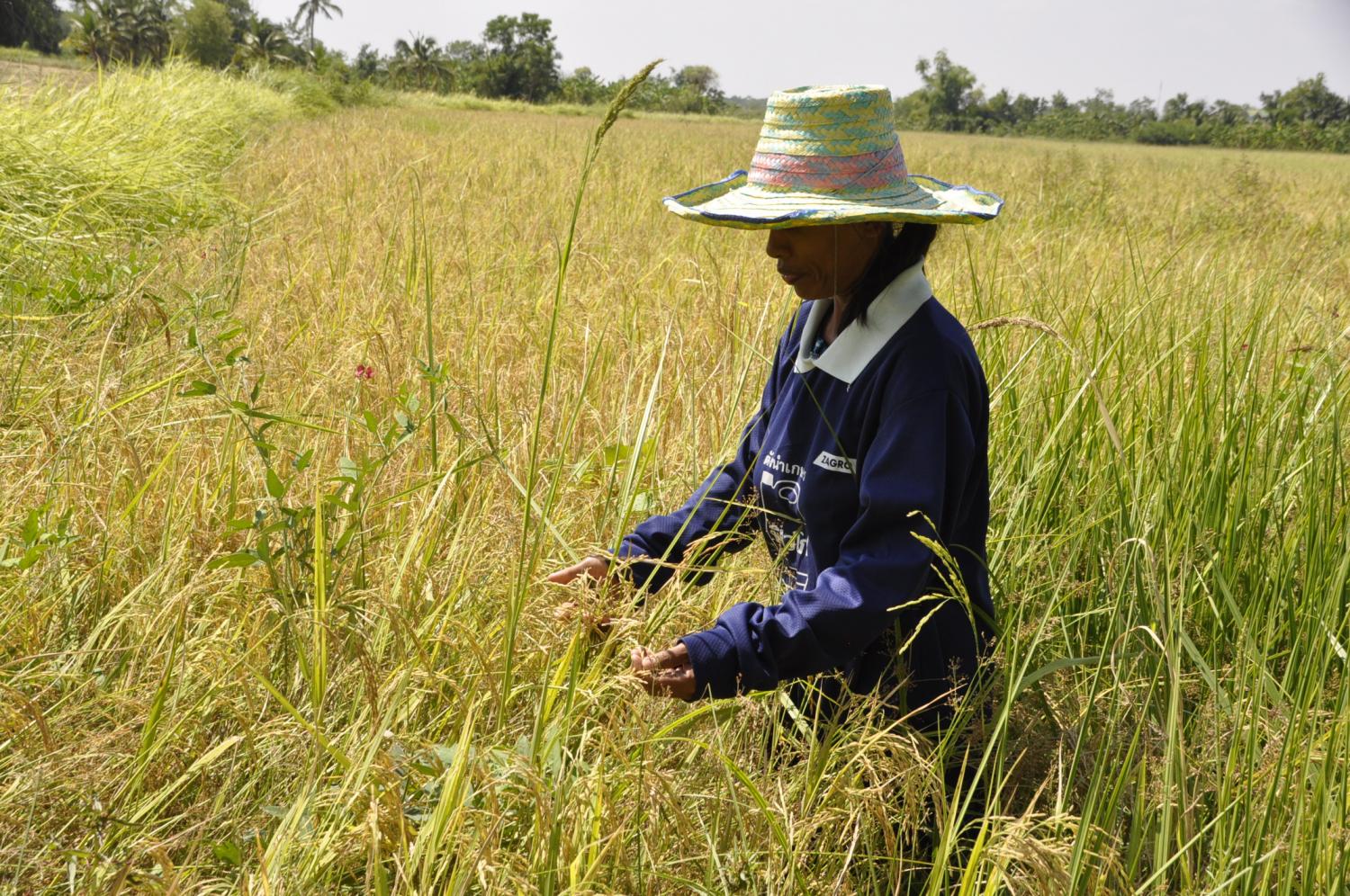