All in the name of security
Business

All in the name of security

Tourists join the immigration queue upon arrival at Suvarnabhumi airport. The government says the enforcement of TM30 is mainly a national security measure. (Photo by Pattanapong Hirunard)

The private sector and government are currently at odds over a new push by immigration officials to enforce the TM30 regulation, requiring landlords of foreign residents to report to Immigration if a tenant leaves his or her residence for over 24 hours.

While TM30 is technically part of the 1979 Immigration Law, the government recently decided to enforce it more strictly and potentially deny visa renewals for those failing to comply.

The government says the enforcement is mainly a national security measure to prevent criminals from hiding out in Thailand and to thwart terrorist attacks.

According to IDC, an IT research firm, Thailand has over 2 million foreign workers that this regulation would affect, in addition to retirees and other long-term foreign residents.

Many expats say the law is burdensome, having to report to their landlord (or if they own their own home, the immigration office) for everything from weekend trips to Pattaya or even if they have overseas friends and family spending the night.

Filing online sounds simple, but some foreigners are complaining that it takes as long as 4-6 weeks to get login credentials, and in the meantime landlords must queue up at immigration offices, waiting in long lines every time their tenants take a quick trip. 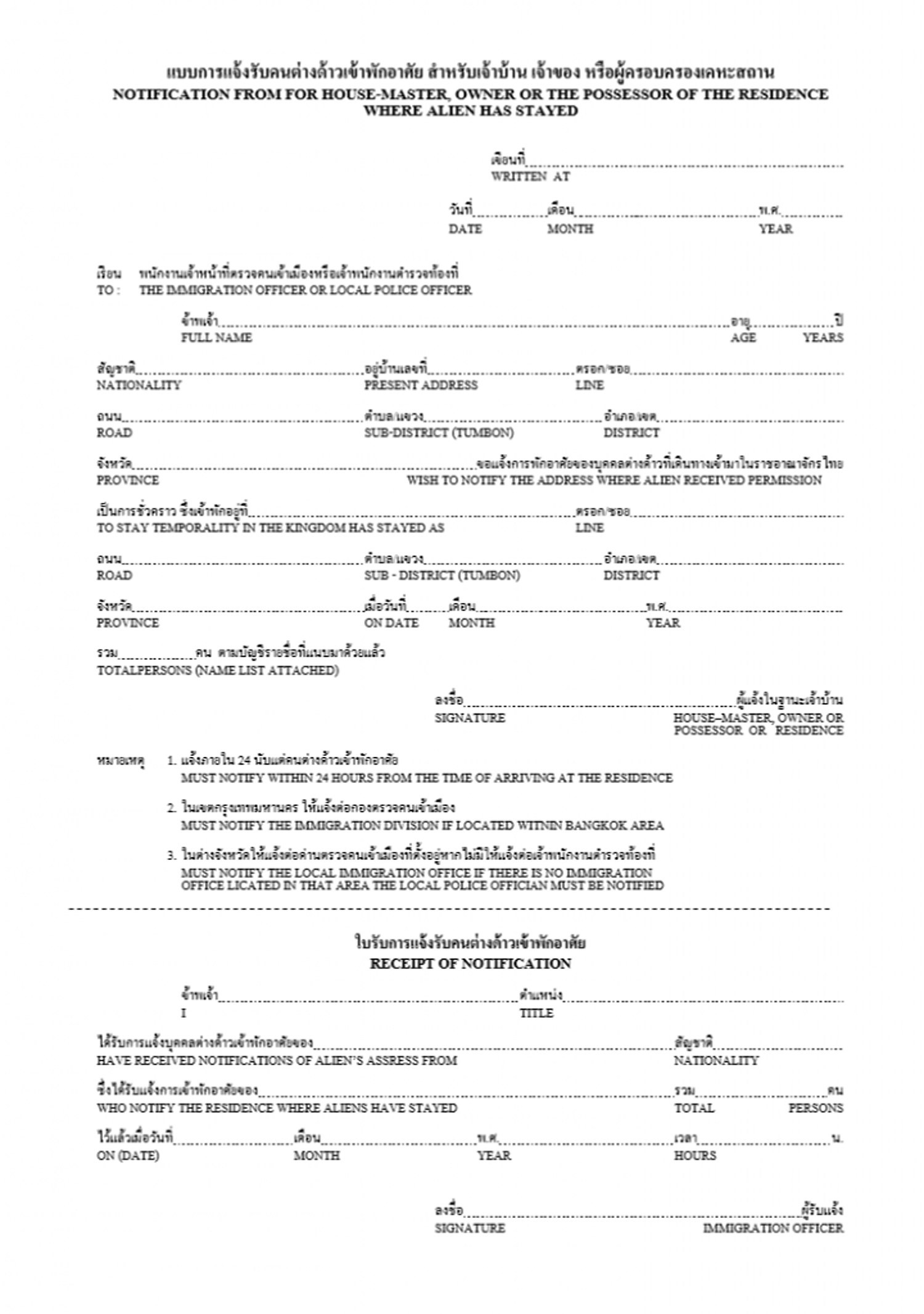 The TM30 form required by landlords of foreign tenants.

Some businesses fear this bureaucratic overreach could dissuade skilled foreign workers from coming to Thailand -- and even harm tourism numbers.

Many sectors, especially Thailand's burgeoning tech startup scene, rely on foreign expertise that may be lacking in the local workforce.

"The rules do not make sense," said Ms Guo, 39, who was born in Beijing and has spent more than 30 years in Thailand. "They make the lives of expats like me more difficult."

She said that if she goes to the provinces to work or travel and wants to spend longer than 24 hours, staying at her friend's home, she is required to report to a local immigration office within 24 hours.

When she is back in Bangkok, she must also report to the Bangkok immigration office, she said.

Siriwat Vongjarukorn, president of IT services company MFEC, said dealing with forms is not the proper mechanism to detect bad guys. Instead he recommends using facial recognition or image detection in real time as a more effective means of security.

However, not everyone in the private sector is as resolutely against the issue.

"To my understanding, Thailand is not alone in trying to keep tabs on visiting foreigners," said Alexandra Reich, chief executive of Total Access Communication (DTAC). "In France, the process to host a foreigner in one's home is even more complex than TM30. In Germany and Austria, it's more relaxed. So I really don't feel I should question or judge the procedure, but would encourage the respective parties in Thailand to discuss and review TM30. Do they feel it makes Thailand safer, and is it an effective tool?

Mrs Reich said TM30 is more of a personal annoyance for those who have friends and family staying at their home, rather than a detriment to ease of doing business inside the country.

"So to make it short: I understand the fundamental intention, but the process can definitely be optimised," she said.

Richard Barrow, a blogger and long-time expat, said the TM30 requirement creates an unnecessary hassle for landlords who now must keep track of every short trip their tenants take.

"The landlord has to register foreigners within 24 hours," he said. "The problem is the landlord might have 10-15 units. It is a lot of work for them to keep registering foreigners every time they come back from a trip. Sometimes, the landlord is not even in the same city or country.

"Now some apartment blocks are putting up signs saying 'no foreigners' because they don't want the hassle."

Another expat source, who asked not to be named, said TM30 might be just another tax collection against landlords that earn money from unofficial rentals. Some expat workers sign agreements with personal contracts instead of via official channels.

Thai Bond Market Association president Tada Phutthitada said the TM30 rule could have a short-term impact on the property business, especially the condo segment in cases where a buyer purchases a unit with hopes of renting it via a property booking platform.

"There could be a short-term effect if foreign condo owners sell their units at lower prices, possibly putting pressure on prices of second-hand condo units," Mr Tada said.

But the rules will likely yield benefits for the country's property sector in the long run by improving Thailand's tourism image by enhancing security for tourists, he said.

"It could be a new opportunity for condo buyers to return to the market," Mr Tada said.

The rules are also deemed a pre-emptive measure to prevent losses in case of a fire.

"By renting properties which are not designed or in compliance with fire safety requirements, if a fire occurs it could tarnish the image of Thai tourism more than a short-term impact [on the property businesses]," Mr Tada said, comparing it to how the Phuket boat disaster affected tourism numbers in 2018.

Asia Plus Securities senior executive vice-president Terdsak Taweethiratham said the TM30 rules are unlikely to have a significant impact on the tourism sector because tourists are apt to stay in resorts or hotels, and these properties have to report to immigration officials as a normal practice.

For tourists residing in Thailand with intentions besides travelling, the measure is appropriate in terms of national security, Mr Terdsak said. Anon Vangvasu, chairman of the Thai Insurance Business Council, said the pros of the TM30 rules outweigh the cons in two main aspects.

National security is the first advantage, Mr Anon said. In cases where a foreign tourist wants to extend his or her stay in the country for more than 90 days, immigration police can verify if the tourist's address matches the address he or she provided to immigration upon entering the country.

Second, in cases where foreign tourists suffer accidents or are victims of crime, the rules cover the properties that they reside in, helping to ensure verification of the travel route, he said.

Jun-Fwu Chin, operation head of leading technology research firm IDC Thailand, said TM30 is necessary for policymakers to prevent terrorist or cybersecurity threats. But he said the government needs to communicate the main policy more clearly with foreigners and provide greater transparency in the implementation process.

Thailand has 38 million workers, of whom 2.1 million are foreign. For IT, Mr Chin estimates that 15-20% of the total IT workforce are foreigners.

Supawan Tanomkieatipume, president of the Thai Hotels Association, said that all registered hotels, accounting for about 300,000 keys, have to conduct TM30 regulations for expats who work in Thailand and prefer to stay at hotels. One of the main responsibilities for hotel operators is to facilitate foreign guests and cooperate with related agencies, namely the Immigration Bureau and the Interior Ministry.

She suggested that the latest TM30 measure, which extends to living places besides hotels, may cause some inconvenience for expats, but overall public security is the issue that has to be considered closely as well.

If an unexpected incident occurs, the authorities can track activity from the TM30 records, Ms Supawan said.

Nuttapon Nimmanphatcharin, president and chief executive of the Digital Economy Promotion Agency (Depa), said the fundamental intention of the TM30 regulation is as a tool for security.

"Personally, I think it would not create a negative effect on experts, talent or investors who come to the country to work," he said. "The regulations require reporting of location of stay for foreigners, but it could be done through several channels, including immigration offices, online or landlords who provide accommodation to foreigners."

Mr Nuttapon said foreigners who intend to work in Thailand for long periods commonly have to obtain work permits approved by the Foreign Affairs Ministry and other related agencies.

Particularly, for smart visa holders, the permit could allow foreigners to work and live in the country up to four years maximum under the government's policy to attract talent and experts to work in the country.

For ease of doing business in other sectors, Mr Nuttapon said guesthouses or hotels always ask foreigners for their passports and to complete forms for immigration.

"It may cause more annoyance in the case of a foreigner's friends and family that the Thai landlord may have to report to immigration channels," he said.