Luxury outlet mall Central Village is threatening established players near the airport, and a similar complex is due to land next year

A plane flies over Central Village, a luxury outlet near Suvarnabhumi airport. (Photo by Patipat Janthong)

The shopping landscape is about to change drastically around Suvarnabhumi airport with the addition of two new premium outlet malls, representing a challenge to the retail throne dominated by the local duty-free kingpin.

Central Village, a 5-billion-baht project of Central Pattana Plc (CPN), is beset with regulatory issues raised by Airports of Thailand Plc (AoT) and has set its footprint by moving into an area dominated by duty-free giant King Power Group. The outlet opened Saturday on a site just a 10-minute drive from the airport.

Siam Premium Outlets, a joint venture of Siam Piwat and US-based Simon Property Group, will be situated a similar distance from the airport and is slated to launch in the first half of 2020.

Outlet malls, which feature a collection of brand-name stores offering surplus and out-of-season merchandise at deep discounts, are a long-time fixture in Europe, North America and East Asia.

Usually located on the outskirts of big cities, these developments provide a way for brands to offload excess stock while letting bargain-hungry shoppers grab normally expensive brands at low prices.

Since Thailand has cemented its reputation as a major tourist destination in Southeast Asia, these retailers also aim to kill two birds with one stone by luring both locals and foreign tourists to designated outlet malls.

But it remains to be seen whether this burgeoning retail model will succeed, and whether Thailand stands to benefit. 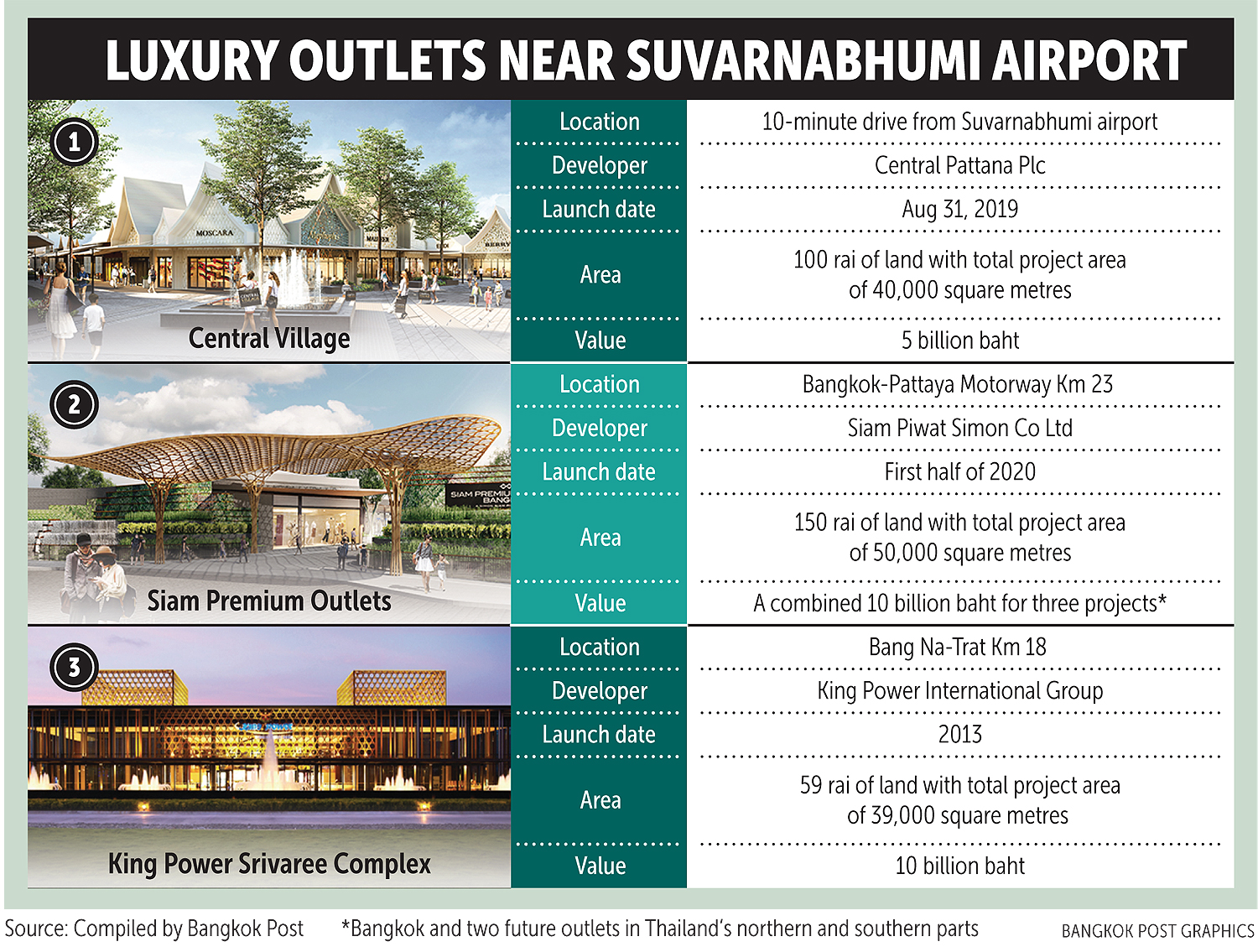 The outlet mall model offers a challenge, but it also presents an opportunity for the two new developments, according to Derek Keswakaroon, a partner in Bain & Co's Bangkok office.

The retail market in Thailand has been growing at a healthy rate of 3-4%, mostly driven by Chinese tourism, Mr Derek said. Thailand's 30% tax on imported luxury products makes it tough to compete against more shopper-friendly Hong Kong and Singapore.

"In Thailand, particularly when talking about luxury products, especially with the tax, purchasing power for premium products is not that much and retailers' primary goal is to get consumers to buy them at full retail," he said. "Demand for luxury products is inelastic in Thailand, so it could be risky to offer these prices, and offloading excess inventory is not as urgent in a market like Thailand where they are not holding that many products to begin with."

Looking at Central Village's brand line-up, top-tier brands like Gucci and Boss are not available at the much-touted outlet mall, Mr Derek said.

"There may be some hesitation as to which brands want to associate with outlets," he said. "If you compare to the US, only a small percentage of brands are available that you would see in a US outlet."

But both outlets have good locations for attracting tourists with deep pockets, and the current line-up of stores at Central Village also includes a mid-range band of stores that would be popular with Thai shoppers.

For the current dominant force in the area, King Power -- which owns and operates duty-free stores at Suvarnabhumi airport and at King Power Srivaree Complex, 15 kilometres from the airport -- the new outlets will likely cause a tremor to its presence and earnings.

According to CPN deputy chief executive Wallaya Chirathivat, the company's strategy for making Central Village a success will be to offer everyday sales of 35-70% off on a wide range of luxury brands and attract tourists and locals with restaurants, a hotel and other amenities.

"This is the first time that a luxury outlet mall is built in Thailand, and this kind of project can help boost Thailand's economy, especially in the tourism industry," Ms Wallaya said. "Every tourist destination city around the world must have this shopping format to attract customer traffic with high purchasing power."

She expects 65% of the outlet's customer base to be Thais, while the remaining 35% will be tourists mainly from China, Russia, South Korea and Malaysia.

The launch of the brand-new Central Village has not proceeded without controversy.

On Aug 21, AoT claimed that the project was encroaching on state land (owned by the Treasury Department) under the supervision of AoT and put up a sign to that effect on the disputed land.

It then blocked the entrance to Gate 1 of Central Village the next day by setting up a large tent and placing intermittent barriers on the road for a distance of 1km. As a result, the project's construction workers could not bring materials and tools to the site.

CPN responded by filing a petition with the Central Administrative Court and accusing AoT of breaching the permit it received from the Highways Department to build the access road from Highway 370.

One day before the scheduled launch date, the court granted CPN an injunction and ordered the lifting of obstacles blocking access to Central Village.

AoT president Nitinai Sirismatthakarn denied criticism that AoT was protecting the interests of King Power, its duty-free shop concessionaire and the party seen with the most to lose if a mall of this scale opens nearby.

A rendering of an outlet mall to be developed by Simon Property Group through a joint venture with Siam Piwat.

For flyers with long layovers at the airport, they now have an alternative shopping option to duty-free stores and could take a trip to the outlets nearby.

Phattarachai Taweewong, associate director of the research department at property consultant Colliers International Thailand, said the recent opening of Central Village is something new to Thailand.

With the improving domestic political situation, the number of tourist arrivals is estimated at 40.2 million this year, with international tourist revenue anticipated at 2.21 trillion baht, according to the Tourism Authority of Thailand.

"Retail business in the Bang Na area will be more active with the opening of the two new luxury outlets," Mr Phattarachai said. "If Bangkok Mall at the Bang Na-Trat intersection is completed, competition will be even higher."

According to market research by Colliers, the Bang Na area had total retail space of 501,000 sq m with an occupancy rate of 98% in this year's second quarter. Rental rates are rising 5-7% a year.

"The Bang Na area attracts investors both from the housing and retail sectors because the location has potential," Mr Phattarachai said. "With high demand for land, land prices have increased by more than 13% per year over the past five years, as building height is limited by city plan regulations." 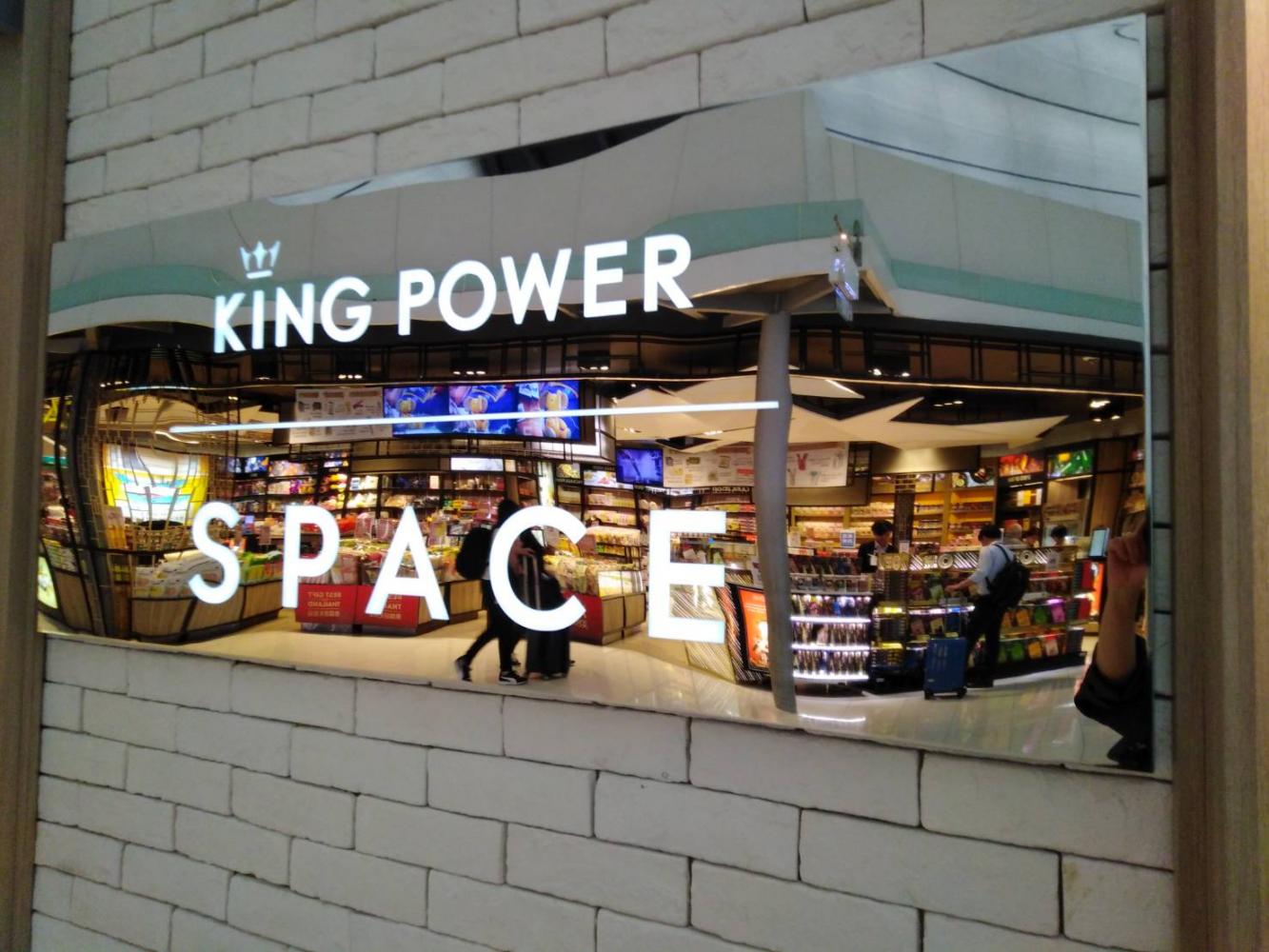 King Power is the sole duty-free operator at airports operated by Airports of Thailand. WALAILAK KEERATIPIPATPONG

Despite having selling points as cash cows equipped with extensive logistics and sourcing networks, especially for Central Group, the two new premium outlets will face a daunting task to live up to the dream of establishing luxury outlet empires of their own.

"A slowdown in tourist arrivals will make [the starting phase of new outlet malls] face difficulty, at least over the next six months, due to the Sino-US trade war, as Chinese tourists make up almost one-third of total tourist arrivals to Thailand," said Thanapong Chirapanidchakul, chief executive of Tanachira Retail Corporation Co, the distributor of Pandora jewellery and Marimekko bags.

But luxury outlets are not a cure-all for Thailand's existing economic problems.

"The buyer groups are not low-income earners," Ms Suttatip said. "Focus groups are the middle class and high-end consumers with purchasing power. It is difficult to assess whether this business model will be sustainable or not, but luxury outlets in foreign countries have been operating to this day."

In 2008, a report by FSP estimated that the 171 trading outlet centres produced sales of €6.7 billion. Despite the banking crisis and growth of online shopping, outlet centres have gone from strength to strength. Estimated European outlet industry sales rose by 51% from €11.5 billion in 2013 to €17.3 billion in 2017, according to FSP.

"[Foreign] luxury brands are on sales at the outlets, but there could be local brands as well because tourists would want to purchase products with local aesthetics," said Deunden Nikomborirak, research director for economic governance at the Thailand Development Research Institute.

From a consumer perspective, fiercer competition in the retail industry is favourable because there are more options for consumers to choose from, she said.

"The outlets could help rev up the tourism industry, as the industry is the segment with the highest income distribution," Ms Deunden said. "It is better to have these outlets than not have them near an airport."

The prime minister ordered the Defence Ministry to look into allegations that the military had been using social media to covertly influence and exacerbate unrest in the South.

UNITED NATIONS (UNITED STATES) - UN leaders on Thursday alleged possible crimes against humanity in Ethiopia's Tigray region including by Eritrean troops as they urged a pullout by the neighboring country, which denies involvement.