With tropical storms bringing downpours across Thailand, many are left wondering if the torrential rains and dark clouds augur forthcoming economic woes, shattering hopes of a rebound.

Thailand's reputation as one of the Asian economic tigers is long gone. Vivid memories of the 1997 economic collapse and anxiety over the current tepid conditions lend credence to concerns of a crisis brewing.

The economy expanded at the slowest pace since 2014, up 2.3% year-on-year, in the second quarter, as a slowdown manifested both domestically and externally.

While fears of a recession may be overblown, many are concerned about how a slowdown could aggravate personal plights, narrowing the promise of possibilities and crushing hopes. 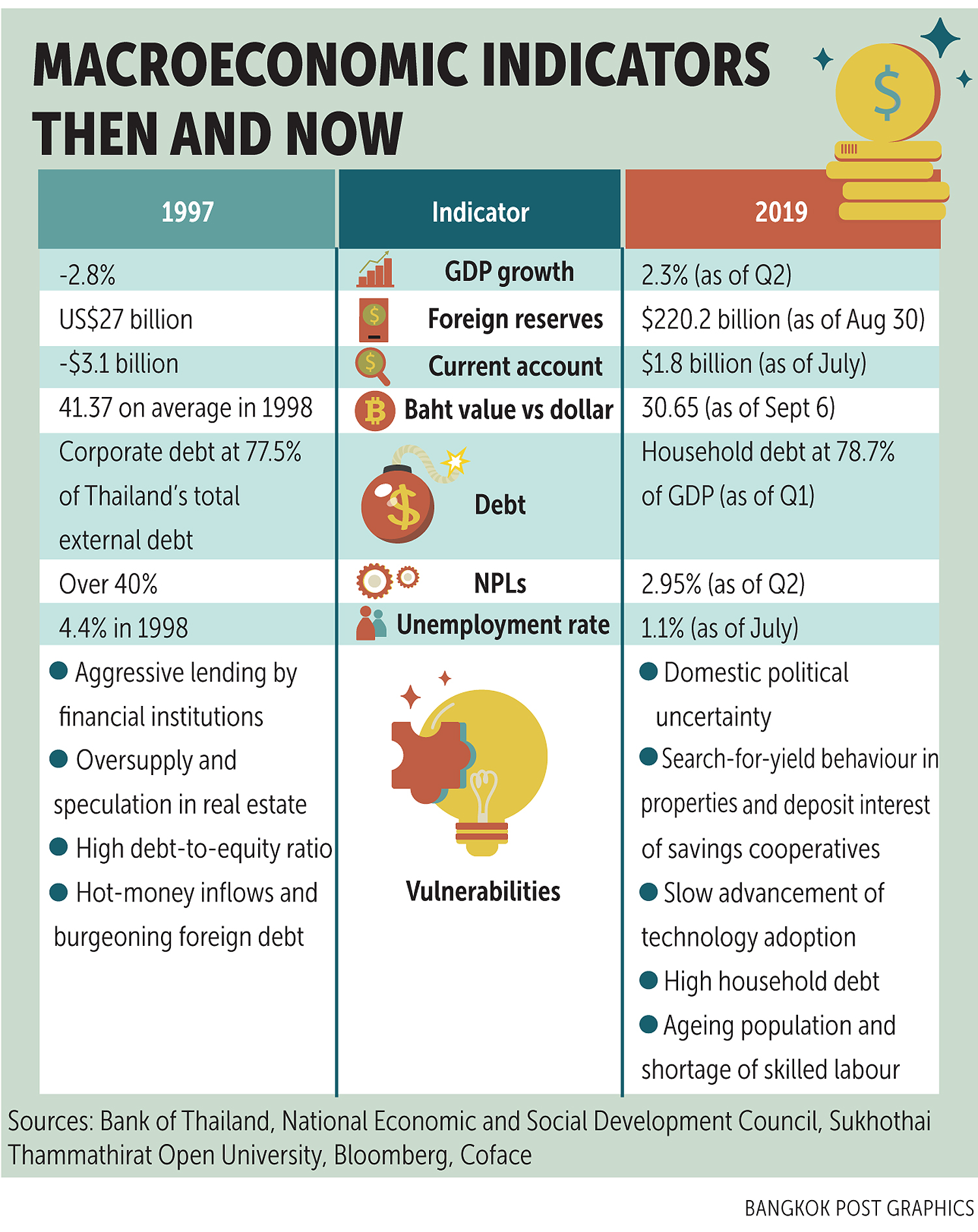 An economic recession or a situation akin to the 1997 crisis is a speck on the horizon, given that the country's economic fundamentals remain solid and the economy is still expanding, albeit at a slower pace, said Fiscal Policy Office (FPO) head Lavaron Sangsnit.

The circumstances during 1997-98 were vastly different from the present, with several macroeconomic indicators painting out a landscape that bears much contrast.

The notorious economic collapse was marred by a 7.7% contraction in GDP in 1998; high inflation of 8%; unemployment swelling to 4.4%; a current account deficit of 8% of GDP; a the non-performing loan (NPL) ratio exploding to 45%.

Foreign reserves amounted to US$27 billion in 1997, compared with $220.2 billion at the end of August 2019. International reserves were 0.7 times short-term debt in the year the country's economy collapsed, Mr Lavaron said.

The economy expanded 2.6% year-on-year for the six months to June this year. At the end of July, inflation was subdued at 0.7%, unemployment was a mere 1.1% and the current account was humming away with a surplus of 6.4% of GDP.

Thailand's credit outlook being raised to positive from stable by both Moody's Investors Service and Fitch Ratings added to foreign investors' optimism about the country's economic outlook, Mr Lavaron said.

"Even though the economy will expand at a slower clip than expected, GDP is still growing," he said. "This is key wording -- our economy is slowing down, but it is not slipping into a recession."

In July, the economy fared little bit better than in the previous month, he said, noting a recovery in exports, private consumption and investment.

Customs-cleared outbound shipments unexpectedly rose for the first time in five months in July, up 4.3% from the same month a year earlier to $21.2 billion after contracting by 2.2% year-on-year in June, 5.8% in May, 2.6% in April and 4.9% in March.

"We don't sit idly," Mr Lavaron said. "The Finance Ministry has launched short-term stimulus measures for the remainder of this year. However, medium- and long-term measures are necessary to cope with economic uncertainties."

The Finance Ministry's medium-term policy takes aim at investment, while the long-term course of action is related to the country's economic structure, he said.

The government's latest economic stimulus package is expected to help shore up GDP and bring about at least 3% growth this year as global economic uncertainties continue to spiral. 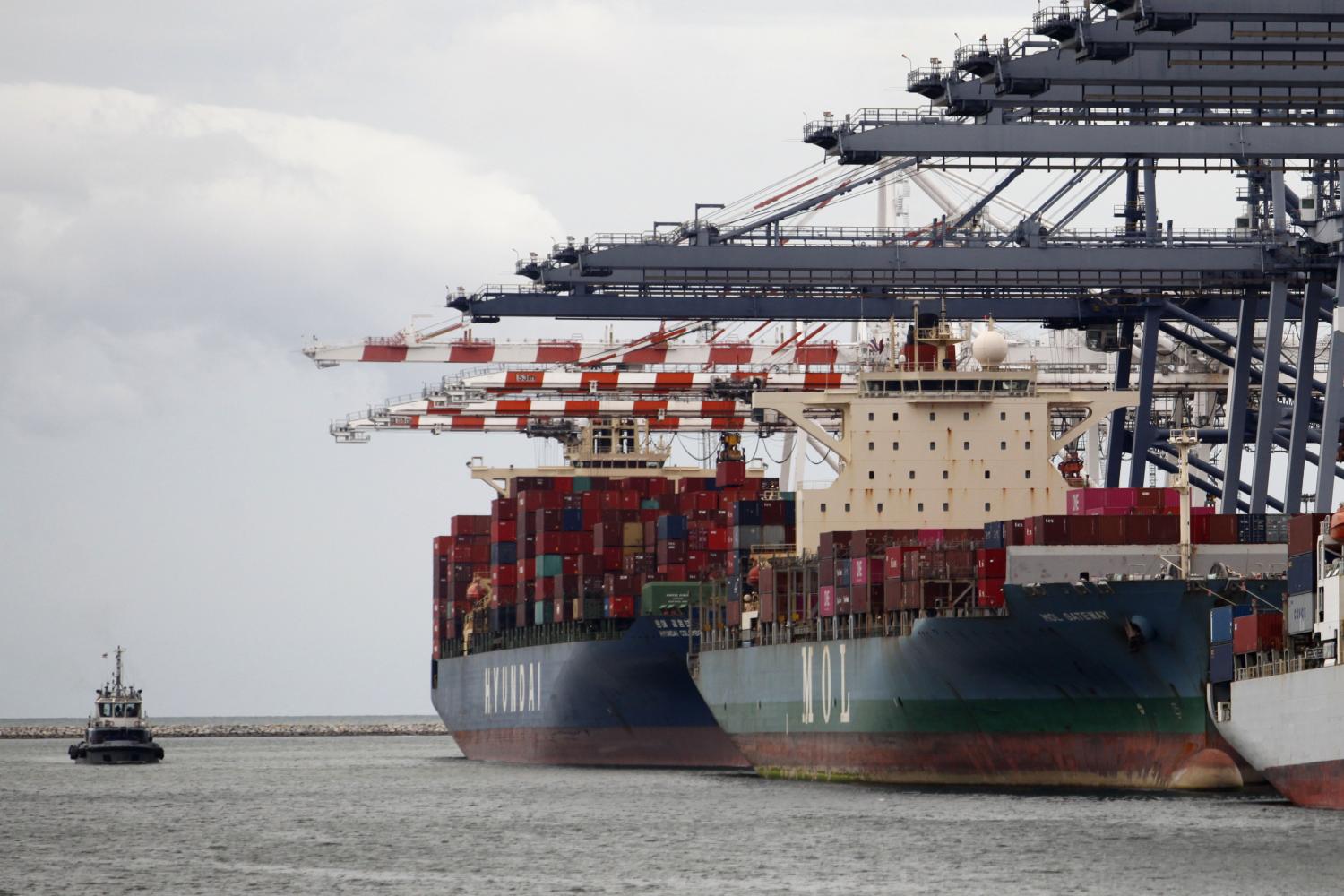 STILL IN THE TROUGH

Thailand's economy last fell into a recession in 2013, when back-to-back contractions during the first two quarters of the year pummelled optimism for many.

Ebbing domestic demand was identified as the main source of disappointing growth as the end of large-scale public investment projects to rebuild public utilities after the 2011 flooding disaster muted consumption, the BBC reported.

Independent academic Somjai Phagaphasvivat said the economy is not likely to register a recession soon, even while a slowdown persists.

A technical recession is defined as two straight quarters of quarter-on-quarter contraction.

"Thailand's economy is poised to remain in a trough for several years because the global economy is slowing down and the country's technological competitiveness lags behind Asian peers," he said.

While a miniature Tom Yum Kung financial crisis may not be in the making, an undeniable parallel lies in present-day Thailand's relatively poor competitiveness.

"Our country is a laggard in terms of trade because we sell low-end technological products but purchase high-end items," Mr Somjai said.

"Despite the export sector, which accounts for 70% of GDP, being suffocated by the ongoing trade row between the US and China, Thailand still has other sectors to buffer the economy such as agriculture, services and tourism," Mr Somkid said. "One of the best solutions for Thailand is to stimulate the local economy. The government is planning a 'relocation package' of incentives to attract foreign companies looking to move production facilities from China." 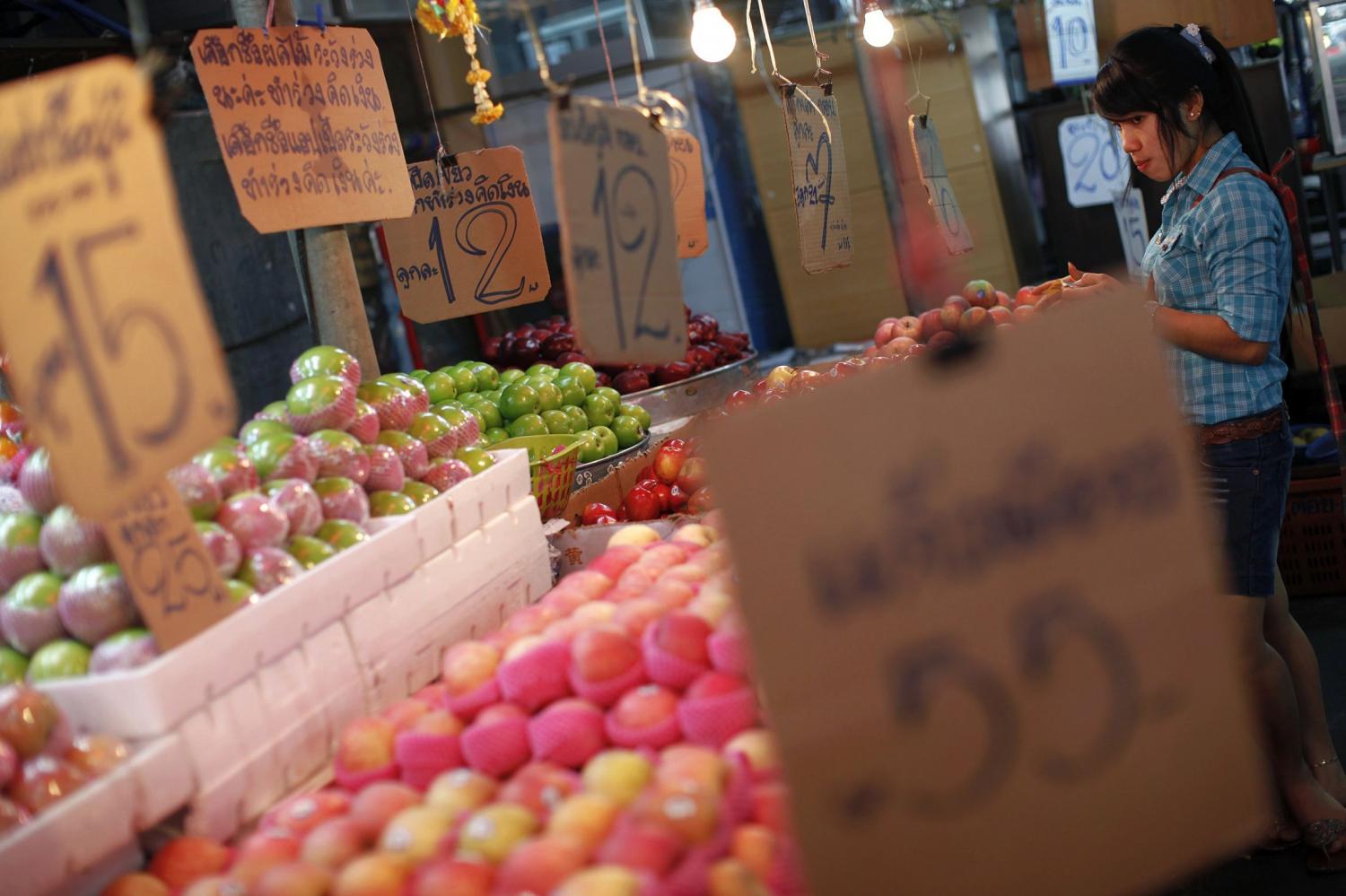 A vendor sells produce at a food market in central Bangkok. REUTERS

With three credit cards in her pocket and an urge to spend, a 29 year-old employee working for a Thai property firm, speaking on condition of anonymity, is shackled with outstanding credit card debt of about 190,000 baht.

"I have purchases that need to be made," she said. "When buying large items, credit cards offer me promotions and instalment payment plans. These are offers amounting to discounts when compared with using cash [for payment]. Some of the things I bought are necessary, while others aren't really necessary."

She also used her credit cards to pay for a surgical procedure that cost about 100,000 baht, as she lacks health insurance and her employer's insurance did not cover the cost in full.

"I have been repaying the debt amount in line with scheduled payment dates stipulated by banks," she said.

Credit card non-performing loans made up 2.48% of total credit card debt in the second quarter, according to Bank of Thailand data.

This single individual's debt burden represents the alarming debt accumulation among consumers and households in Thailand. The country has been characterised by some as the "sick man of Southeast Asia" as officials struggle to remedy debt burdens in the formal banking sector.

To the FPO's Mr Lavaron, the elevated household debt situation is not so worrisome, since more than half of the leverage is in the form of secured loans, with mortgages and auto loans accounting for 29.2% and 15.4% respectively at the end of March, while 16.4% was debt from running businesses.

Thailand's car market declined for two months in a row in June and July, with further drops anticipated over the next few months.

Industry experts and car makers have attributed the downward cycle to more stringent auto loan approvals from banks and the intensifying trade war.

According to the Federation of Thai Industries (FTI), car sales in July contracted 1.1% to 81,044 units sold. This marked a consecutive dip from June's auto sales, which had fallen by 2.1% year-on-year to 86,048 units sold.

"These models are the cheapest models, implying that buyers of these cars were the first group who faced loan rejections from banks, based on prices and loan payment capabilities," Mr Surapong said.

He said the club has found that the rejection rates of several banks for auto loans are up to 30%, compared with less than 10% before April.

"As the industry has observed, small passenger cars have suffered the most from the drop in overall sentiment," he said. "Toyota has yet to take a look at the pickup segment, where farmers and SMEs are the main buyers. [But] once pickup sales decline, we will have a clear indication that the domestic economy will suffer directly from the bearish circumstances."

Toyota witnessed lower car sales in June and July as the local market suffered from poor economic sentiment. In July, the car maker projected difficulties for the car market in the second half, including GDP growth downgrades, auto loan inspections by the central bank and the US-China trade war.